A Witch is a human with the power to affect change by magical means, called "Witchcraft". A witch can be either female or male. They connect themselves with supernatural forces in order to practice magic.

Witchcraft is a practice of magic that encompasses many different types of activities including astrology, divination, spell casting, and spirit communication. It includes the practices of many cultures, nations, and religions as well as many books and writings from ancient times. Depending upon the individual, some witches practice their power by certain belief systems, such as Hoodoo, Voodoo, Wicca, or any number of other magical practices from countries and cultures all around the world. Although the majority of witches are portrayed as being malevolent men and women who use their powers for dark and sinister deeds, other witches, such as Nora Havelock, have proven that not all witches are satanic, and commonly use white magic to maintain balance within the world.

According to Rowena, there are three recognized types of Witches in the world, classified by where they draw their magic from. These three types are known as the Borrowers, the Naturals, and the Students.

The term "Borrower" is commonly used to define any witch who has obtained their power through demonic forces. These witches are known to have summoned demons and made deals with them in exchange for power. While it is common for these witches to have traded their souls for power, it has been implied that not all Borrowers sell their souls, but rather promise the demon something else of value. According to the witch Rowena, these witches are very common and make up for more than half of the witchcraft community.

The term "Natural" is commonly used to define any witch who has obtained their power from biological development. Not much is known about these witches apart from the fact that they are known to have been born with a natural affinity to the supernatural powers of the universe. According to Rowena, these witches are very rare and make up for less than half of the witchcraft community.

The term "Student" is commonly used to define any witch who has obtained their power through practice and training. While these witches are commonly known to have been taught about witchcraft from other witches, it has been implied that some Students are self-taught. According to Rowena, these witches are less common than Borrowers, but more common than Naturals.

Witches who are in this section are unknown as to where they draw their magic from, and cannot be classified as either a Borrower, a Natural or a Student witch as of now in the series.

All covens must have at least one or two leaders, known as the High Priestess and/or High Priest. These witches are accountable for a number of different responsibilities, such as creating the laws of their coven that every member must abide. According to Rowena, each coven has its own set of laws and punishments created by the leader(s) of that group. While some covens have only a few laws, others, such as the Grand Coven, have many. Rowena explained to Crowley that the other members of her coven, especially Olivette, always envied her power and thus sought to smother her talent. Rowena expressed how after consistently disobeying the rules handed down from the others, she was exiled from the coven and forbidden from further using magic.

According to Bobby Singer, the power of a witch is not only dependent on the source of their magic, but also on their knowledge and training in witchcraft. For example, although witches who obtain their power from demons (Borrowers) are generally more powerful than witches who obtain their power from study (Students), if a witch does not have much experience in witchcraft, they can be easily subdued. This was proven after Sam Winchester easily frightened and intimidated a coven of Satanic witches, who did not have much training in witchcraft and seemed powerless against him. Whereas, years later, the Winchesters met a Student witch named Spencer Wallis, who, because of having years of training, was well-versed in some of the most powerful spells the Winchesters have ever heard of. Furthermore, while some witches, such as Wiccans, have been known to provide laws for themselves and have strict convictions as to how magic should be used, most witches have been shown to have free will over their power, and have demonstrated extraordinary feats without necessarily having to draw from demons. One prominent example of this being Rowena, who was able to control higher beings, cast many dangerously powerful spells, and even resurrect herself. 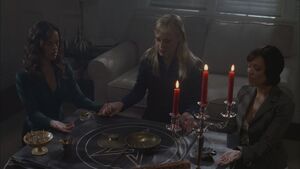 Retrieved from "https://supernatural.fandom.com/wiki/Witch?oldid=370018"
Community content is available under CC-BY-SA unless otherwise noted.