We Need To Talk About Kevin

Kevin (guest star Osric Chau) talks Sam and Dean into checking in on his mother (guest star Lauren Tom). When they arrive, they see that Crowley (guest star Mark Sheppard) has surrounded her with demons so they rescue her and take her along on their quest to find the tablet. However, they soon discover Kevin wasn't kidding when he said his mother was a strong-willed woman after she tries to take on Crowley.

An old man, Mr. Vili goes to a bank and has the clerk take him to his safe deposit box. He identifies it as Box #1 and the clerk removes it,. Inside is a small coffer holding a bone. Vili picks it up and tells the clerk that it's very valuable, and then informs her that he's making a withdrawal... There's a scream and the woman's blood splatters against the wall.

The Winchesters stop with Kevin to get something to eat, and he insists that they check on his mother, Linda. Dean figures that Crowley has placed demon guards around Linda and tries to convince Kevin that she's perfectly safe, but Kevin doesn't believe it. He keeps arguing and Sam backs him, and Dean finally agrees to drive to the Tran home in Neighbor, MI. They scout out the house and spot several demons, possessing the bodies of the gardener and the mailman. The brothers take them out and move in. 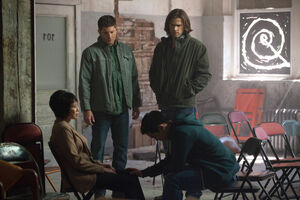 Linda is meeting with her neighbor, Eunis, who says that Linda is best off staying and waiting for Kevin. Kevin knocks at the door and Linda greets him, and Dean and Sam spray her with holy water to make sure she isn't possessed. Sam runs into the kitchen as the Eunis-demon tries to leave the host body and he casts a ritual that drives her back into the body. Once the brothers secure the house, they tell Linda about the tablet and Kevin's new role as the Prophet. When they prepare to take her to a safehouse, Linda insists on going with them to protect Kevin's soul. Kevin admits that he can't tell her what to do and the Winchesters agree but tell the Trans that they'll have to get anti-possession tattoos. Much to Kevin's surprise, Linda assures them that it isn't her first tattoo.

Once the Trans are tattooed, the group heads to Laramie, WY and goes to the bus station where Kevin hid the tablet in a pay locker. However, they discover that it's gone and talk to the station manager, Jerry. He says that his predecessor, Clem Smedley, was stealing from the lockers and is under arrest. The brothers interrogate Clem and Sam tries to convince him to tell them what he did with the tablet. Dean remembers torturing a monster in Purgatory to find Castiel's location. He threatens to cut its throat if it doesn't talk, and then Dean kills it anyway when it does.

When Clem refuses to talk, Dean grabs him and prepares to cut his throat if he doesn't talk. Clem quickly tells them that he sold the tablet to a pawnshop and Dean lets him go and leaves with his brother.

At the pawnshop, the Winchesters try to convince the clerk, Lyle, to tell them who bought the tablet. He refuses and points out the security cameras that prevent them from attacking him. Linda steps up and tells him that she spotted his new sports car outside and figures that he traded for it and avoided paying the tax. She threatens to report Lyle to the IRS and he quickly caves.

The buyer lives at a motel but nobody answers the door. A well-dressed man steps up and introduces himself as Beau, and knows Kevin and the Winchesters by reputation. He gives Kevin an invitation to the auction that he's holding on behalf of his boss, Plutus, the God of Greed. Beau assures them that Kevin will save safe passage because Plutus has warded the auction against angels and demons. The Winchesters insist on going with Kevin and Beau extends his invitation to the others as well and disappears. Dean wonders what they have to do to raise the money to bid on the tablet, but refuses to let Sam sell the Impala. Sam figures that it doesn't matter because they'll just get Kevin to the tablet and then he can read it and leave.

The group goes to the abandoned warehouse where the auction is being held and Beau lets them in. After turning in their weapons, they go through the display room and spot the tablet. However, a metal plate has been fastened to it, making the script unreadable. Crowley comes in, well aware of what they were up to, and dismisses them as amateurs. He introduces himself to Linda, who slaps him and tells him to stay away from Kevin. Plutus, an overweight couch potato in a tracksuit, comes in and Beau tells them that the auction will begin. As Dean follows the others in, a teenager in a Wiener Dog uniform comes in and stops Dean. He explains that he's the angel Samandriel, wearing the body of a cashier named Alfie, and asks Dean what happened to Castiel. Dean tells him that Castiel didn't escape from Purgatory with him. Alfie says that there are still some angels who believe that Castiel's heart was in the right place, but he feels that the problem was that Castiel had too much heart.

Dean and Benny find Castiel at a stream and Dean embraces his friend. Castiel appears distracted and admits that he's not sure if he's sane.

Benny asks why he abandoned Dean and Castiel explains that Leviathans have been following him and he led them away from Dean to keep him safe. He tells Dean to leave, but Dean explains that going home via the portal. Benny warns that the portal may not permit angels to pass through, but Dean says that they have nothing to lose. Castiel insists that Dean leave him but Dean vows that he won't leave Purgatory without him. Upon hearing that, Castiel nods in understanding.

Alfie attends the auction with the others and Crowley greets him, and then warns the Winchesters that it will do them no good to banish his demons from earth because he'll just create more (he is unaware of that the tablet can close the gates of Hell forever). Beau starts the bidding at over three million and the Winchesters realize that they can't possibly match that. Dean goes to Plan C and claims he's going to the restroom. He finds the room where the bid items are stored but there are too many guards to get to the tablet. Distraught, Dean returns to the auction room where Crowley taunts him, suggesting he should try Plan D for "Dumbass."

Mr. Vili bids on the Hammer of Thor when it comes up for bid. He wins, bidding the bone and five-eights of a virgin. The tablet is next and Crowley and Alfie bid against each other. When neither one can meet the base price, Plutus teleports Kevin to his side and chains him. Beau says that they'll throw in Kevin, the only person who can translate the tablet, as part of the sale. A desperate Linda offers Beau all of the money she has but he tells her that it's not enough. At that she offers her soul, catching Plutus' attention. Crowley bids a million souls but Plutus says that Linda's willing sacrifice is what makes her soul so valuable. An irritated Crowley bids his own soul but Plutus laughingly points out that he doesn't have one, and then congratulates Linda on winning her son and the tablet. Furious and humiliated, Crowley storms out of the room.

After the auction, Linda wonders what will happen and the Winchesters admit that they don't know but she'll wish she was dead. Linda asks for a moment alone before Beau takes her soul. As the Winchesters leave, Sam complains that the whole thing sucks but Dean says that they're lucky they're getting off so cheap to obtain the one item that can defeat every demon. Meanwhile, Alfie approaches Linda and expresses his admiration for her. He offers to place Kevin under the protection of the angels but she refuses, saying that the angels couldn't protect Kevin before and she'll trust in the Winchesters.

The others are waiting in the storage room and Mr. Vili collects his purchase. Plutus boasts that he may sell Linda's soul back or simply enjoy it, as Linda comes in. Dean realizes something is wrong and grabs her arm, revealing that the tattoo on her arm has been burned off. Crowley, possessing Linda, tells them that he bribed Beau to remove the tattoo so he could possess Linda. Beau stabs and kills Plutus and Crowley kills the guard. Dean grabs the demon-killing knife from the Winchesters' box of weapons and goes after Crowley, who runs rather than face them in his limited physical body. Dean goes after Crowley and Kevin runs after him while Beau shoots at Sam. Sam takes refuge behind a table with Mr. Vili, grabs the hammer, and throws it at Beau. As Sam starts to follow Kevin, he turns to Vili and asks where he got five-eights of a virgin to purchase the Hammer. When Mr. Vili sheepishly shrugs in response, thus admitting to murder, Sam kills him with the relic.

Dean catches Crowley and prepares to kill the demon and his host body. Kevin runs up, distracting Dean, and Crowley leaves Linda's body and goes to his own, which is hidden nearby. The demon grabs the tablet and heads for the door. He tells Kevin that because he was in Linda's head, he now knows the true purpose of the tablet. He also knows Linda's secrets including who Kevin's real father was. As he goes, Crowley gives Kevin a parting word of advice: the Winchesters get people close to them killed.

Linda goes into a coma and the Winchesters take her back to the auction room. Dean tries to reassure Kevin but the Prophet points out that he was ready to kill Linda to stop Crowley. He tells the Winchesters to leave him alone with his mother for a few minutes. Outside, Sam asks his brother if he would really have killed Linda and Dean admits that he would if it would have killed Crowley as well. The brothers realize that Kevin is up to something and go back to the auction room. Kevin has taken Linda and left, leaving them a note saying that they shouldn't search for him. He also says that Dean lets people die when they're no longer of use to him. Sam assures his guilt-ridden brother that it isn't true.

In Purgatory, Dean watches as Castiel slides out of sight, yelling for Dean to help him.

(After Sam thought of selling the Impala for money)