Edit
watch 01:33
'Supernatural' Lore: Wayward Sisters
Do you like this video?
Play Sound

Wayward Sisters is the 10th episode of Season 13 and the backdoor pilot episode for the attempted spin-off of the same name. It aired on January 18, 2018.

When Sam and Dean go missing, Jody Mills (guest star Kim Rhodes) calls Claire Novak (guest star Kathryn Newton), the rebellious rogue hunter, and tells her it is time to come home – they need to find the Winchesters. Claire returns and reunites with Alex Jones (guest star Katherine Ramdeen), who has stayed behind with Jody and tries to balance a "normal" life with being a part-time hunter. While Jody is happy to have Claire home again, she's plagued by Patience's (guest star Clark Backo) disturbing vision involving her adopted daughter. Claire and Alex search for Kaia Nieves (guest star Yadira Guevara-Prip), the dreamcatcher responsible for opening the rift that Sam and Dean went through, as she holds the key to their whereabouts. Jody calls her friend, Donna Hanscum (guest star Briana Buckmaster), to round out the team and the women head off on the most important hunt of their lives.

In Iowa, a man sharpens a knife. He glances over a girl—Amanda Fitzmartin—tied up and continues sharpening his knife. He then goes over, unaware that a van is approaching his house. The man, Ed, asks Amanda if she wants to hear a knock-knock joke. An older man, tells him not to play with his food. Ed continues and reveals his werewolf fangs and eyes, just as the older werewolf hears the van pull up. Someone walks up to the door and says "Delivery". Ed opens the door and the woman---Claire—tells him that his name is on the box. "It says "Mr. Werewolf", and as Ed realizes that Claire is a Hunter, she shoots him with a sawn off shotgun. The older werewolf throws a knife at her and runs out, and Claire confirms who Amanda is. She says that she'll be right there and the second werewolf attacks her. Claire flips him over and stabs him to death, then cuts Amanda free and says that her mother has been looking for her. A female werewolf comes in, and Claire turns and shoots her dead and then tells Amanda that it'll be okay.

The next morning, Claire drops Amanda off with her mother. Jody calls Claire and says that Sam and Dean are missing and it's time for Claire to come home.

Claire drives back to Sioux Falls and goes to the sheriff's office. She goes in and finds Jody and Alex checking their list of contacts. Jody hugs her and says that she's glad that she's home safe. Patience comes in and Jody introduces her to Claire. The teenager explains that she's a psychic and Claire figures that Patience is sleeping in her room. Jody plays back Sam and Dean's last phone call saying that they're looking for Kaia, and reports that Kaia escaped from drug-ordered recap three days ago and there's a warrant for her arrest.

Kaia is lying unconscious by the road. A car pull up and the driver calls 911.

The ambulance comes to pick up Kaia, and something watches from the shadows.

Alex is working at the hospital at her job. Claire comes in and asks if she knew about Patience' visions. Alex admits that she did and she knew how Claire would react. She says that she helps Jody with anything because she's there for her. Alex tells Claire that Jody never stopped worrying about her, and Claire wants two minutes in the hospital system. She has Alex check on Kaia and finds a report about an unidentified woman brought in at the hospital.

Claire goes to Kaia's room where the doctor tells her that they'll have to keep her under observation. Kaia sees Claire watching her from the hallway. Once the doctor leaves, Kaia starts to get dressed. Claire comes in and says that she's a friend of Sam and Dean. Kaia doesn't want to discuss it and walks out of the hospital. The creature, a Canid, moves in on her just as Claire comes out and draws her knife. It knocks her back, but Jody arrives and shoots it in the leg. Claire recovers and stabs it in the throat, and tells Kaia that they should talk.

Jody, Alex, and Claire take the creature to Jody's garage. Alex removes the Canid's mask, while Claire talks to Kaia. Kaia says that she saw the Canid as part of a pack, and they follow their prey by scent. In her dreams they sometimes catch and kill her. Claire notices the scars on Kaia's wrist ad says that she has similar ones, and shows her various monster wounds on her body. She then asks Kaia what happened.

Alex removes the mask as Patience looks on. Claire and Kaia come in and Claire has Kaia explain what it is. She explains that she sees another dimension, the Bad Place, and it's where the Canid came from. Sam and Dean wanted her to help them open a door there, but something went wrong. Kaia doesn't know how the Canid got there, and figure that if Sam and Dean are in the bad place then they're already dead.

In the Bad Place, Dean is cooking lizard while Sam looks on. Sam figure that there best is chance to find the door, but Dean warns that it might not have remained open. He advises Sam to eat up. Heavy footsteps sound in the distance, and the brothers move on. A hooded figure with a spear approaches the fire.

Patience packs and Alex asks if she wants to go home and pretend she isn't a powerful psychic. The teenager says that she's not a fighter and Claire blew her off. Alex tells Patience that she isn't a fighter and they help in other ways, but Patience insists that she can't do it. As she goes to her jeep, she gets a vision of more of the Canids leaping through the windows. Claire wants to stay and fight, but Patience insists that there are too many and they're all in danger.

A few minutes later, the Canids break into Jody's house and find no one there. The women are on the move and watching via a hidden surveillance camera.

The next morning, the women regroup and Jody explains that she called some backup. Donna pulls up and insists on hugging Alex and Claire. Jody tells Kaia and Patience that Donna has killed a lot of vampires, and Donna shows them the weapons she bought. Kaia explains that they pulled into an abandoned boat yard, and Alex locates it on the Internet. Jody talks to Claire privately and tells her to stay there and keep the other safe until she and Donna check it out. Claire agrees without an objection.

Sam figures that they're in a different universe, and they hear something move in the brush. The hooded figure takes them both down with her spear staff.

Jody and Donna check out the shipyard and see the abandoned cars. The two women go in and board the boat, and find the melted angel blades.

Kaia realizes that Claire is scared, and Claire explains that she's said she always wanted to go out doing something great. But Patience's vision has made her face her own mortality, and now she wants to stay safe. However, the Winchesters saved her life so Claire isn't going to abandon them. Kaia agrees and says that she'll go with her.

Jody and Donna find the open portal in the upstairs wheel room and Jody says that she's going in because if she doesn't, Claire will. They hear the Canids growling outside and go to investigate. Two of them are aboard, and the two women retreat as the Canids follow them. Donna and Jody open fire and take one down, and then run.

The Winchesters wake up tied to trees. The hooded woman walks up and bangs her spear staff on a nearby skeleton. The brothers hear the creature roaring in the distance as the woman walks off, and Dean figures that they've been set up for the creature's next meal.

Claire tells Patience and Alex that Jody isn't picking up her phone, and figures that something is wrong.

Outnumbered, Jody and Donna hide in an abandoned car. The Canids move past and the women debate what to do. The Canids hear them and start trying to break in. Donna shoots one and a flame burst takes out the other. The women get out to see Claire wielding a flamethrower. Donna realizes that one Canid is missing, and Claire hears the energy discharge from the portal. She runs to it and Jody warns that it's closing. Claire insists that she has to save Sam and Dean, and tells Jody that she has to let her... and Jody agrees.

Donna loads a shotgun and gives it to Patience. The last Canid comes back and there are others with him. Donna tells Patience and Kaia to head upstairs and yells for Jody to help. Jody tells Claire to go, and she and Kaia go through the portal. They arrive in the Bad Place and follow the creature's growling.

Alex and Patience shove a cabinet down the stairs at the Canids, and then retreat to the wheelhouse.

Claire and Kaia find the Winchesters and cut them free. Kaia says that Jack is with Mary, and they head for the portal.

Donna assures Patience that she's got it. The canids come in and the women open fire.

At the portal, the figure throws a spear at Claire. Kaia knocks her out of the way... and the spear hits hurt. Sam and Dean draw their knives, and Claire holds Kaia's hand as she dies. The creature closes in on them, blocking out the moon. Claire starts to go after the figure, but Dean grabs her and the brothers take her through the portal.

Patience kills a Canid, and Claire and Winchesters come through the portal just as it closes. Patience realizes that her vision of someone being stabbed with a spear and Jody holding Claire came true.

Back at the house, Jody tells the Winchesters that Claire will need a lot of time. The brothers warn that the portal was open enough for more creatures to come through, and Jody assures them that she and the women can handle it. After the Winchesters drive off, Jody goes inside and approaches Claire. She tells Claire that not all of it is on her, but Claire doesn't believe it. Claire admits that she just raced in with no plan, and she failed to protect Kaia like she promised. She understands why Jody is the way she is with her, and Jody tells her that when she's ready, they're all there for her.

Alex, Patience, and Donna clean up the house. Patience says that she killed a monster, and Donna and Alex welcome her to the family. Meanwhile, Claire makes a diary entry saying that all of them saved Sam and Dean. She goes down to join the others—her family—and she writes down that she's staying there because she needs them.

A portal stands open in a park in Sioux Falls. The hooded figures comes through.

Claire into her monologue and promises to find a way to locate Kaia's killer and kill them for revenge.

The figure removes her hood, revealing that she's Kaia. 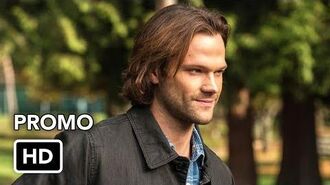 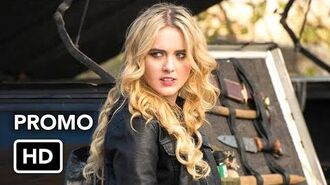 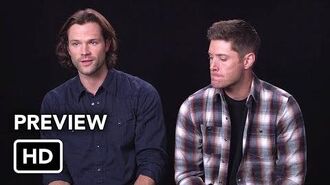 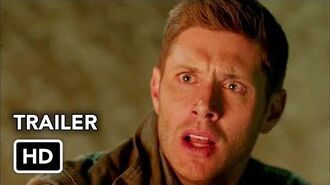 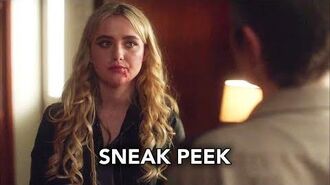 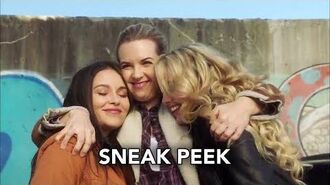 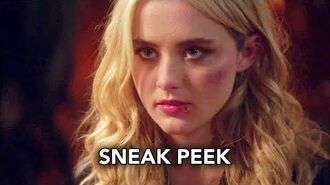