War of the Worlds

War of the Worlds

The Scorpion and The Frog

As Sam and Dean continue their search for Jack, with Asmodeus (guest star Jeffrey Vincent Parise) hot on their trail, they stumble across a familiar foe. Meanwhile, Lucifer manages to escape Michael's (guest star Christian Keyes) grasp and finds himself an unlikely and mostly unwilling ally.

Lucifer tells Michael about his world as the latter reads his mind. Michael explains that he has become the leader of his world and plans to move into the Paradise of Lucifer's which he will rule over. Lucifer snidely remarks on his current leadership of his own world and Michael shakes the cage he has Lucifer in, impaling him on the inward barbs.

Sam and Dean continue their search for Jack to no avail. There are no signs of any Nephilim activity which Dean is skeptical about since Jack could cause a tsunami with a hiccup. Castiel is concerned that this means Jack has been taken to Hell by Asmodeus or to Heaven by the Angels. He has arranged a meeting with another angel to inquire about Jack and tells Sam and Dean they cannot accompany him. Dean tells him not to do anything stupid before finally accepting Castiel's decision. Dean tells Sam he has found a case where witches are being killed and suggests that they work a case as their search for Jack is proving fruitless.

Asmodeus tries to reach out to Jack when another demon enters telling him that Hell has exhausted their resources in searching for the Nephilim to no avail. Asmodeus is frustrated that he cannot sense Jack despite his great power and the Demon informs him that a hunter they have on the pay roll has informed them that Sam and Dean no longer have Jack either.

Lucifer suggests to Michael that he wail on Mary Winchester for a while. Michael explains his plan to enter Lucifer's world- the latter points out that the gateway is gone- and brings in Kevin Tran who works as a Prophet for Michael. Lucifer is surprised to see him before telling the confused Kevin his counterpart is dead as Michael shrugs this off. Michael reveals Kevin has deciphered a spell from the Angel Tablet that could theoretically open a door to Lucifer's world. The spell requires Archangel Grace to work so Michael takes some of Lucifer's.

Dean and Sam review the security footage of one of the witch abductions and spot someone who looks like Arthur Ketch in the video. A witch named Daniela approaches them and asks for their help noting that while they don't like witches, they do help people in trouble.

Kevin prepares a spell to open the doorway and Lucifer tries to convince him that Michael is a monster and Kevin should stop. Kevin points out he is in an inescapable situation as a Prophet he must serve God but since God is not around he serves the next high ranking which is Michael and that Lucifer is Satan so he doesn't trust him. Kevin manages to open the doorway using Lucifer's grace. Using the momentary distraction, Lucifer breaks free of the guards and jumps through the portal which seals behind him- Kevin expresses his delight that it worked even though it only admitted passage for one. Michael threatens Kevin that he better get the portal to open permanently.

Back in his world, Lucifer discovers that as part of his grace has gone he can no longer smite people with a snap of his fingers. Asmodeus who is torturing the receptionist of the hotel that Jack and the Winchesters stayed in senses Lucifer's return.

Daniela confirms the man in the picture the brothers have is the one who attacked her and explains to Sam and Dean that she escaped from Ketch and shows them the scars from his torture of her and that he is looking for Rowena MacLeod. Using Daniela as bait, the Winchesters lure Ketch to a witch safe house and knock him out with a dart. Back in the Bunker, Dean takes delight in beating up Ketch in retaliation for what he did to his mother. Ketch claims that he is Arthur Ketch's twin brother Alexander who fled the British Men of Letters after refusing to complete initiation. He works as a freelance mercenary hunting Supernatural creatures. Dean doesn't buy it.

Castiel meets with an angel named Duma at the Heavenly Portal who tells him that Heaven does not have Jack. She explains that after the Fall the number of angels has drastically decreased and they are close to extinction. Two more angels appear as Duma offers Castiel with returning to Heaven if he helps them find Jack as they need him to use his powers to replenish their numbers as God has left. Duma states Jack will listen to Castiel if he persuades to help but Castiel refuses to help them enslave Jack and fights them but the three gain the upper hand and Duma holds a blade to his neck. However, Lucifer appears on the scene and orders them to release Castiel. He scares the angels away before collapsing, due to over exertion of the limited grace he has. Castiel furiously storms towards him as they both express disbelief at each other's return and revival. Lucifer stops Castiel warning him that he isn't too weak and they are all going to die.

In a bar, he explains what happened in the alternate reality and that the world's Michael and 'meth head' Kevin Tran are going to break through. Castiel is skeptical and refuses to trust Lucifer who claims that they need Jack to stop Michael when he breaks through. Castiel refuses to hand over Jack but accidentally gives away that neither he nor the Winchesters have him.

Sam finds documentation of Alexander Ketch proving his existence but Dean remains sceptical. He receives a phone call from Castiel who tries to tell him Lucifer is back before Lucifer appears next to him and he is forced to hang up. Dean thinks something is wrong and is angry to see Sam has allowed Ketch to walk around (albeit in chains). The two leave and re chain him up.

Lucifer eagerly asks Castiel about Jack when Asmodeus and a group of demons arrive. Lucifer tries to assert his authority over Asmodeus but the latter remarks only the old Lucifer had power over him and, in his weakened state, Asmodeus has power over him now. He blasts Castiel and Lucifer across the bar.

Dean and Sam arrive later that evening to discover the damage of the fight. The two are attacked by demons until they are saved by Alexander who used a lockpick in his mouth to escape and drove after them on a motorbike in the garage. Dean points a gun at him and states he knows that despite Alexander's claims he knows that he is really Arthur. Arthur admits his identity and explains that the British Men of Letters captured Rowena a few years ago and discovered the spell she had sewn into herself that revived her. In exchange for her escape, she did the same for Arthur but the spell needs recharging so he is seeking her out. Dean says that Lucifer killed Rowena, something Ketch is skeptical of, and raises his gun. Ketch throws flash grenade and escapes but not before Dean shoots him in the shoulder.

In the impala, Dean calls Castiel who tells him that he didn't have a signal but he has found a lead on Jack and is following it. It is really Asmodues mimicking Castiel's voice having captured both the real Castiel and Lucifer whom he hopes to use to lure Jack to him and deal with the Winchesters.

Asmodeus remarks that he likes to prepared for anything and if Lucifer is right about the invading alternate Michael then they will need the Nephilim to help. Arthur Ketch, working with Asmodeus, states that the Winchesters shouldn't be a problem. 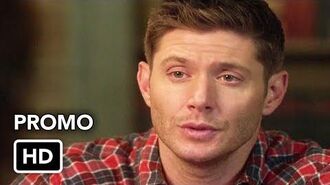 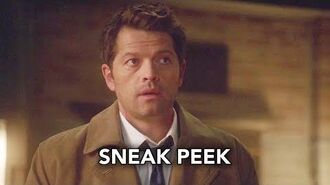