Edit
watch 01:33
Wiki Targeted (Entertainment)
Do you like this video?
Play Sound 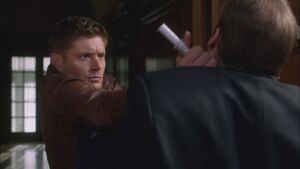 Vamptonite is the nickname for human blood that has been infected with the leviathans' corn syrup mixture meant to dumb all humans down. A side-effect of the mixture is that it is dangerously toxic to vampires, killing them the instant the blood is ingested. Sam and Dean have discovered this and used it as a weapon.

In addition to killing vampires, this weapon also kills werewolves, shapeshifters, ghouls, and all other creatures that prey upon humans, with the exception of leviathans. It is unknown if this weapon would kill Eve but is unlikely because she might be related to leviathans in some way. It is also unknown what effect this substance would have on monsters which did not feed on the physical aspects of humans, such as shtriga, crocotta, or certain members of the djinn race.