Back to page
Add topic

Hi, welcome to Supernatural Wiki! Thanks for your edit to the Time Travel page.

Hey. It's clear that most people, probably even the crew, like Dean way better, and for good reason. Sam sucks. He's killed one main villain and that was with powers, and it's not impressive to say you killed someone with powers. Without his powers, Sam's frequently getting beat up from all sides, and to point out, in "Point of No Return," Sam needed Castiel to get Dean because he had such a low chance of beating Dean that he didn't even bother. Dean's awesome and Sam's just boring and there. You're right, Sam's not nearly as flirtatious as Dean, and it's good that he doesn't try flirting, cause no attractive woman would reciprocate. Yes, Missouri called them handsome, what a compliment. *sarcasm* Sarah said that she thinks Sam was only reasonably attractive. Sam's lame, boring, weak, disregarded, overshadowed, etc. I mean, what do you like about Sam? When people compliment Sam, they say he's kind, caring, smart, and sweet *facepalm*, but when they compliment Dean, they say he's brave, charming, and handsome. -- ImperiexSeed, 5:46 PM, April 7th 2015

You're kidding me, right? She never thanked Sam once in the entire episode for anything, and the episode, like any other, was all about Dean. Hell, Sam didn't even get any interaction with Lucas, and in the end, Dean got all the recognition. She 'thanked' Dean not Sam. -- ImperiexSeed, 7:33 PM, April 24th 2015

I literally just got done rewatching "Family Remains" just now, and she only shakes Dean's hand and thanks Dean. I'm not saying this only because I hate Sam, it was in the episode. Go on Netflix and rewatch that scene. Her husband, Brian, shook Sam's hand, but she only shook Dean's. -- ImperiexSeed, 1:15 AM, April 28th 2015

Stop being fuc*ing biased! What I'm doing in this is in no way biased at all, while just assuming that when Dean's thanked, Sam's just automatically included too without actually evaluating the situation and using body language or the tensity of the interaction to make the determination, IS bias. -- ImperiexSeed, 3:32 AM, May 10th 2015

You're skipping over what I just said because you know I'm right. Every time Dean's thanked, you automatically just mesh Sam in there without evaluating anything, which is bias. If they're both thanked, fine, but if they're looking at Dean and say 'thank you' and that's the extent of the interaction, then I'm sorry, but that means Dean was thanked and not Sam. -- ImperiexSeed, 3:42 AM, May 10th 2015

Hey, Trip391. After I lost my admin rights a while back, CalebChiam said that later on, if the community was alright with it, he would return my rights. It has been nearly half a year since then, and I am requesting my rights back. I am leaving a message on the talk pages of established users, to see who is and isn't alright with me becoming an admin again. Twilight Despair 5 said that he is willing to give me another chance, and said he sees that I have improved since that time. RaghavD said he wouldn't be comfortable with me being an admin, however. FTWinchester said that the wikia needs a lot of help, and would be comfortable with me having rights, but he is unsure about the admin rights. I know I messed up last time, but I am asking you to give me another chance. I think everyone deserves a second chance, and promise I won't do anything to mess it up this time. What do you say, will you please give me another chance? EmpyreanSmoke (talk) 21:38, May 23, 2015 (UTC)

You think Sam is a hero? If you do, that's sad. First off, before we go anywhere else, could you name someone from the show (besides Dean, obviously) that's called or looked at Sam as a hero. And crazy Becky doesn't count. -- ImperiexSeed, 9:36 PM, July 8th 2015

I'm NOT harassing you here at all, but can you pleas provide for me how Dean's not the hero of the show, how anyone except for Dean recognizes him as a hero, and when it's been showed that any other angel besides Castiel has looked at him as not an abomination? -- ImperiexSeed, 9:05 PM, July 9th 2015

If you could leave me the source of where it says that he is confirmed dead, then that would nice, as I couldn't find it. I'll wait until you provide me with that before I make any further edits to Death's page.

Hey, Trip391. How's it going? I set up an RFA a while back when I was thinking about befoming an admin again, and forgot that I made the page until now. Would you mind sharing your thoughts on the page when you can? Thanks so much. EmpyreanSmoke (talk) 00:06, September 18, 2015 (UTC)

Hey Trip, I just wanted to appreciate for whatever you are doing and contributing, good job! SeraphLucifer (talk) 20:24, October 31, 2015 (UTC)SeraphLucifer

The script for The Kids Are Alright only lists the name of Katie's mother as "Katie's mother", and does not contain "Dana Keel" anywhere, which makes sense of she was divorced from Richard Keel, and she would likely not have kept his last name. Articles should be written in the past tense as well, and I only had time to correct this in the places where I was correcting her name in the article. If you don;t fix it, I'll get to it later. Trip391 (talk) 21:16, November 14, 2015 (UTC)

Respectfully, I have not seen the script and have no idea what it says. I have, however, watched The Kids Are Alright closely enough to have noticed that the pill bottle on Katie's mother's nightstand has the name "Dana Keel" printed on it: Keel Prescription. The strategic placement of props would be in the aforementioned script as well, would it not? I really don't see the problem with adding the name to your 'corrections' to the page if it is in fact the character's name.

As for the tense of the article or synopsis or whatever you want to call it, I would argue that present tense is widely considered the correct tense in which to compose in this environment, as it is fictional and not historical events that actually happened. Most of the pages in the SPN wiki are in present tense. So, please don't 'fix' it. (not to be disrespectful, but just to share a go-to of mine: Writer's Relief). Peace. Mkr11282 (talk) 23:13, November 14, 2015 (UTC)

Well, I'll consider the the Dana Keel/transcript issue dead because I provided the link of the screenshot, and i don't have access to the sacred scripts and go with what I can see. As far as the past tense issue, I respectfully disagree with the SPN wiki Gods. To my mind, writing a synopsis of an episode, for instance, is like giving a play-by-play of the action as it happens. You can't give a play-by-play in past tense and have it read right, or at least I can't. So, if i decide to keep participating, I suppose i'll pay for my wiki sins by having to see every thing I write rewritten. We'll see. Peace. Mkr11282 (talk) 11:33, November 15, 2015 (UTC)

Or, you could simply fix the formatting.

Trip! missed u! i think more than 24 hrs have passed since you've graced a page that i started with your learned corrections. i feel honored, Wise One, to be your focus when according to you, there are hundreds of pages that are in need of your past tense wisdom. Carry on.Mkr11282 (talk) 01:04, November 19, 2015 (UTC) 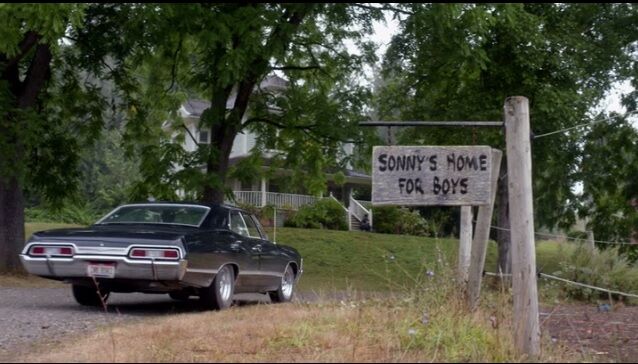 You have little to do with anything about my editing, except for some of the mistakes you've made, which I've fixed. But, I know, you somehow can't figure out or care how to write in the past tense or whatever. You don't bother me at all, actually, but you should change some of your language, as referring to me as the "Wise One" sarcastically, and saying things like "rubbing your nethers like 60-grit sandpaper" can be taken as personal attacks and harassment. I know, you don't care about rules on a wiki or whatever, but just a heads up. Trip391 (talk) 19:21, November 19, 2015 (UTC)

My offerings are only mistakes in your all-knowing eyes, Wise One. I, and hundreds of other wikia participants apparently, beg to differ. I am able to write in past tense, but my point is that to do so when you synopsize a fictional work, past tense sounds awkward, at best, stupid at worst. My opinion, granted, but my opinion counts if i'm creating a page. If you want to 'fix' every thing that i do, fine. I'll just try to keep up with re-fixing your fixes. You've oceans of wiki pages in need of your learned guidance, while i only create/tweak a few. So, I have infinitely more time on my hands than you. Do the math. But, we can dance if you want to.

As for the sandpaper comment being construed as harrassment...if you can't take a little joke, maybe you should resign from the Wiki Gods committee. Heads up, noted.Mkr11282 (talk) 20:35, November 19, 2015 (UTC)

Hello, your opinion would be appriciated regarding: http://supernatural.wikia.com/wiki/User_blog:Lambda1/EmpyreanSmoke_Admin_right_removal_and_infinite_ban Lambda1 (talk) 20:35, November 23, 2015 (UTC)

Hey, I've blocked the two IP addresses for the remaining duration of Empyrean's block. That being said, I have to point out that edit summaries are not the proper location for a discussion about another person's edits. One revert would have been fine, and when Empyrean had persisted with the previous version of the article, you should have raised it on the talk page, as opposed to continuing an unproductive edit-war, which rarely convinces the other party.

Also, as for the issue of speculation, this is slightly tricky and requires some exercise of discretion. The way the trivia point was raised by Empyrean was indeed speculative, but it could have been modified to something much less so. After all, it is not without basis, and something more factual, such as 'The endless hooks and chains in the surrounding background resemble the location Dean was sent to in Hell.' Strictly speaking however, you are not wrong in removing it as speculation. Cheers. Calebchiam Talk 07:50, December 14, 2015 (UTC)

You might want to take a second look at Supernatural Wiki:Style Guide - a place is correctly described by using the present tense. Cheers. Calebchiam Talk 07:55, December 14, 2015 (UTC)

Your logic is flawed. If God literally couldn't create ANYTHING with the darkness there, he couldn't have made the archangels. Metatron most likely meant he couldn't creating anything without it being corrupted. Also, the way you have God's page set up says that the archangels came first, so don't say that it is neutral. Death didn't just say that the Leviathan were the first beast, he said they were created LONG BEFORE angel or man! Also, you guys are reverting it the same number of times. Light bearer (talk) 23:16, December 29, 2015 (UTC)

Hi Trip391, I am doing sort of a survey, I just want to learn your opinions about my edits, if you could reply I'd be grateful. SeraphLucifer (talk) 18:03, January 25, 2016 (UTC)SeraphLucifer

Don't deal with him. Admins will do the right thing. Thanks for support anyways. SeraphLucifer (talk) 20:47, February 1, 2016 (UTC)SeraphLucifer

I want to understand an edit[]

Hey,  like it says in the headline, I want to understand an edit you made on January 13, 2016. The problem is I don't see why it was wrong.

Can you explain me the reason why you reverted that revision that goes with canon? It took place in season 6 episode 11 "Appointment in Samarra".