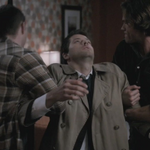 Hello! i have noticted that you are a big role in creating the new relationship pages, and i think it is a great idea! i would love to help. if you have some that you would like me to make please post them on my profile. thanks.

Is there a schedule to the chat? I keep looking and it's empty.

Hey Mr.Comatose i have an idea to add to this wikia but as Dean would say:I can't do this alone leave a message on my talk page if you're interested thank you for your time

Hey Mr.Comatose it's me again i'm just a beginner here and i need some help on how to eliminate a page thank you for your time Damon-Balthazar-Salvatore 00:19, September 6, 2011 (UTC)

I've been active here for, what, a few months, and I was wondering, if I could become an admin here.. I believe I have what it takes, and I know absolutely everything about the show! -- ImperiexSeed, 5:16 PM, October 9th 2011

Regarding super-stamina, I'm pretty sure it does! If in doubt, re-watch the seasons, and you should see that it applies.. Besides, I'm not one who makes pages that make no sense, therefore there are legitimate reasons for my pages. -- ImperiexSeed, 7:01 PM, October 13th 2011

It's nothing against you, it's just something personal, man. Hope you understand. I doubt she'd want me blabbing her story on the chat, you know. Kindly, -- ImperiexSeed, 10:26 PM, October 14th 2011

In response to your question, no, I don't think that I will.. Sorry, but she's still it's vessel, but has just shape-changed into Gaines, and therefore the page should stay as such. You know what, tell me why you want it changed, and I'll think about it. -- ImperiexSeed, 7:47 PM, October 20th 2011

Let me enlighten you... Look, she still exists but as it's vessel, currently. Dr. Gaines is dead, but it just assumed the guy's appearance while still in possession of Annie. Remember how Gabriel would change his vessel's shape, but still maintained it.. Well, the same thing's going on with Annie, the Leviathan is still inside her, she's just shapechanged. -- ImperiexSeed, 8:36 PM, October 20th 2011

I understand, you had a bad day, which we all go through. And just so you know, I don't have bad intentions, I merely fix what I see as inaccurate, but never trying to make you or anyone else mad. -- ImperiexSeed, 4:41 PM, October 21st

Hey, JW, why did you delete my edit about sam and deans time in hell? Dean spent 40 years in hell, showing that he has about 70 years.

Sorry i wasnt logged in when i popsted a message...im the one who put the edit about sam and deans time in hell.

It did not anger me, i was just curious. I tried not to word it in a way that they were older than they were. I was trying to state long they have been concious in one way or another. its not like coming back after 4 months on earth changed the 40 years in hell. Do you have any suggestions on a way to word that statement? According to christianity, when you go to heaven, or hell for that matter, you are in a perfect body, meaning it does not age(a bit of an irrelevant fact but i just thought id throw that in there :] )

I know I'm an admin, but I have something I'd like your honest opinion on.. On many occasions, in "Free To Be You and Me", "The Third Man", and "The French Mistake", archangel Raphael made storms, so does that mean he's hydrokinetic? I'm quite confident that he is, and would to create a page about it. -- ImperiexSeed, 2:25 PM, January 14th 2012

Hey, I was thinking of making a category titled "Hunger-based" for characters like Famine, Leviathans and Vampires. What's your opinion on this? -- ImperiexSeed, 12:50 PM, February 19th 2012

Yes, most everything eats, but what I'm talking about is beings that strongly revolve around hunger (hunger-oriented, in other words), not just beings that eat. -- ImperiexSeed, 1:22 PM, February 19th 2012

I would you like your opinion on something. Should I create a page about Dean and Death's relationship, or would it be too minor? -- ImperiexSeed, 8:54 PM, February 21st 2012

Hey if you listen to the Out With the Old trailer, you can hear the narrarator say March 9th is the returnn date. I have also seen March 16th as the air date, but i am 99% sure that it is March 9th.

Hello, following the admin asking me if I had any ideas for a page, I came up with dreamwalking, as many beings, Angels, Archangels, Sephirms, Higher demons ect can go into peoples dreams, and even manipulate them, well he's unsure wether it should have a page or it should be classed as a form of telepathy, so we decided to ask other uses what they think of it, so if you would be so kind as to tell him what you think, it will be much appreciated, thank you. General MGD 109 19:54, February 25, 2012 (UTC)

you can add angels page.

Retrieved from "https://supernatural.fandom.com/wiki/User_talk:Mr.Comatose?oldid=109956"
Community content is available under CC-BY-SA unless otherwise noted.