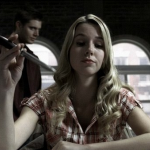 Hi, welcome to Supernatural Wiki! Thanks for your edit to the User blog:Destiels/Survey page.
Please leave a message on my talk page if I can help you with anything!
Also note that we are in the process of converting articles written in the present tense to the past tense. So you are welcome to edit any such article you come across. Once again, Welcome! RaghavD (talk) 20:19, January 1, 2014 (UTC)

Oh don't worry, your message was crystal clear. Additionally, there are a number of editors here whose first language isn't English, myself included. My talk page is free whenever you want to talk about something. FTWinchester (talk) 14:31, January 2, 2014 (UTC)

Don't stress yourself too much over the signature. Even I remember to add it sometimes. FTWinchester (talk) 14:33, January 2, 2014 (UTC)

You got that right. I'm Filipino, so English isn't my native language. Anyway, the reason why we have the 'extra stuff' is that we are trying to cover as much topics as possible. More over, I think this wikia is the pioneer for covering Supernatural, which is why we have more articles (the other languages simply followed and translated the content). In fact, if I have all the time and motivation in the world, I could even write maybe some 30 more or so new pages. FTWinchester (talk) 22:26, January 5, 2014 (UTC)

I meant that if you plan to summon demons, I have no idea how to do those. Close enough, but I currently live in Canada. I've watched all episodes except for two (Freaks and Geeks and Sharp Teeth). Seasons 1-5 are the best seasons, I don't think the show could ever get back to how great it was. It started sliding down around Season 7, and Season 8-9 is a storytelling lore mess. The individual episodes are still okay, but in the long run, the story is going nowhere. If you are fond of shows with demons and those that hunt them, check out Buffy the Vampire Slayer. It's the show that set the foundation for fantasy series like Supernatural. Unlike Supernatural however, that show features more interesting characters, and its major arcs/plots just keep on getting better even up to season 7. FTWinchester (talk) 18:54, January 29, 2014 (UTC)

That's no problem. Yeah it's really cold in here, even worse than last year's winter, and it takes a toll on my health. I'm not in school right now, but I may be taking up additional courses and certifications so I could get a better job. Buffy the Vampire Slayer was created by Joss Whedon--the genius behind Firefly, Dollhouse, Toy Story, and more recently, The Avengers, and the Agents of S.H.I.E.L.D. (I haven't watched them all, but those I've watched are enough to convince me the guy is pretty great and awesome). Like I said, Buffy the Vampire Slayer (BtVS) became the template and the standard for many sci-fi/fantasy shows that followed, including Supernatural. If you like, check out our wiki for you to get a glimpse. Some good points that BtVS has over Supernatural: A+ feminism, fresh lore and arcs almost every season, more characters, a musical that inspired other shows to have musical episodes of their own, incredible fight and action scenes, larger sets and number of props, etc. Of course, since it was finished several years before Supernatural started, expect the special effects/computer graphics to be rather obvious (and sometimes downright painful). Still, those are minor things. If you enjoy Supernatural, you will most likely enjoy BtVS too (even writers and producers of Supernatural are fans of BtVS). Also, the titular character, Buffy Summers, is pretty much a female counterpart of Dean Winchester--full of heart, snark, puns, bad-assery, and the drive to hunt down monsters and demons. I'll let you know if I have questions about Germany. Your english seems okay. Otherwise, I would not be able to understand you. For the most part, it's pretty functional and more than satisfactory. FTWinchester (talk) 02:48, January 31, 2014 (UTC)

Well, yes, it was a compliment. I only enjoyed winter last year because it was my first winter and it wasn't that cold. Now I hate it. Spring and Fall are where it's at. I like summer too, but I don't like too much heat. You should be fine with your orals. If how you write is also how you speak, then I don't think you would have problems. I wasn't telling you to watch all the shows Joss Whedon created, just Buffy the Vampire Slayer.

I listen to those, especially Linkin Park. I listen to several genres. Currently, my playlist is classic rock partly due to Supernatural, also partly because my dad loved to play those songs when I was a kid. I listen to pop as well, but I'm not that cool with bubblegum pop. Other songs I like are some techno, trance, EDM, psychedlic, grunge rock, pop-punk rock, and indie.

I actually have no idea how your schools are run in there. If you have the time, then go ahead. It would be nice to learn something new. FTWinchester (talk) 14:16, February 1, 2014 (UTC)

I find it odd that for a germanic country, your education system uses Latin terms. But, you are right, in America and many other countries, gymnasium or gym for shorts refer to a sports hall. I take it based from your posts that schule is then the deutsch word for school? What if you were sent to Hauptschule but you eventually improve--does that mean you never have the chance to move out of your classification as 'stupid'? There are different stages of developmental learning after all, right? FTWinchester (talk) 22:45, February 4, 2014 (UTC)

Retrieved from "https://supernatural.fandom.com/wiki/User_talk:Joanna_Beth_Harvelle?oldid=109603"
Community content is available under CC-BY-SA unless otherwise noted.