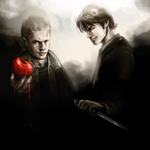 Hi, welcome to Supernatural Wiki! Thanks for your edit to the The Winchester Gospel page.

Regarding your comments at Talk:Wincest, yes, the Wiki is still in need of much work (and in need of active admins). While I'd like to edit here more often, I have commitments elsewhere which limit my time. About granting admin tools however, we (Kyle and I) are willing to grant the tools if you have proven trustworthy, all you ever needed to do was ask. :) I've gone through your edits and although you haven't been here for very long, I should think that you are a suitable candidate for adminship, and the Wiki could most definitely use some. So without further ado, I have assigned the Administrator UserRight to your account, I hope to see you use these tools for the betterment of the Wiki. Cheers. Calebchiam Talk 10:46, December 27, 2010 (UTC)

I've been working here for a few months now, and I was wondering, if I could become an admin here.. Take a look at my edits, and you'll see my thoroughness. I believe I have what it takes, and I know absolutely everything about the show! -- ImperiexSeed, 12:31 PM, Octover 11th 2011

You can now do the following:

You may notice that at the bottom of most pages, there are 3 ads for other Wikis, an ad can be requested at Community Central if I'm not mistaken, but it requires a certain number of supports. It's only temporary however. We should stick to developing content here as that is ultimately what will draw editors in. This should be helpful as well. Calebchiam Talk 14:06, December 27, 2010 (UTC)

Look at this stuff I've come up with. How's all this?

They are very good. Unless I'm much mistaken, the first background is derived from that of the CW site, isn't it ? You are a pro! :P But I'm afraid we won't be able to use them because:

If you can reduce the file sizes then we can still use them. The icon is usable; I'll just have to generate it into a favicon. Like I said they are very good but I'm afraid there are restrictions. :( Hallichester... 16:21, December 30, 2010 (UTC)

I'm on it. These files will be compressed in almost no time at all. :)

Alright. Here they are. The background and banner, both compressed properly. :)

The banner's alright but I don't know why it's still saying "Incorrect file size" for the background! :S I Do you think you can further compress it? :(

Alright. I just uploaded a further compressed version. But I'm already seeing the change. The banner, the new color scheme, even the background! Dude, we got it!

Well, you can say I did some mojo on it to make it fit! :P So is it alright? I mean, the colour background, the buttons and the links? With this change, we'll have to do something about the Infoboxes. Check Sam Winchester. We can't make out the writing, apart from the links. I'm gonna have a talk with the Admin who "turned" me about your promotion. -- Admin // Hallichester 18:06, December 30, 2010 (UTC)

Heh. Well, I like what you did with the colour background, buttons, and links. But I think we could make it fit and blend better with the background. It's currently teal, but maybe you could try making it a darker shade of teal. The buttons and links are yellow, but I think going in line with season six's title card, we could make it blue. And are there any text color changes? If there is, that could solve the infobox problem. Change the text color from white, to maybe a light blue or something to distinguish it from the background and the links.

And I'm looking forward to the verdict regarding my promotion.

Hey Hallichester, I've given sysop tools to Thesilentpoethosea. Good work with the new skin and favicon, looks good. Slight note though, try not to view adminship as a "promotion" of any sort, it doesn't make you better, it's just a couple of tools to help you edit the Wiki to a greater extent. Here's a quote from Wikipedia's founder:

This is also why I don't mind granting the tools to any active, trustworthy user we have around here. Just something to keep in mind. Keep up the good work. :-) Calebchiam Talk 04:14, December 31, 2010 (UTC)

Hi, I see that there is an active admin here :) Well, could you please put this on the MediaWiki:Wiki-navigation page, because I belive this is a better navigation than just the four seasons.

Do you think maybe you could help me with something? On the Smallville wiki, the user Cloisfan1 and his/her IP 24.16.12.42. were blocked and I was accidentally blocked in the process. It won't show up in my contributions; so could you please undo the Cloisfan1 and 24.16.12.42. blocks for me? The main admin won't do it, so please help me out! I already tried the wiki staff, but it's been 3 days since I sent the message and they haven't gotten back to me. Thank you! - TomWellingishot

Hi. Supernatural Wiki looks good -- I love your skin! I'll be happy to put it onto the approved spotlight list, but I can't guarantee when it will appear. My best guess is that if I put it on now it will probably be up around mid-September at the latest; typically after being approved the spotlights go up in 2-4 weeks and run for 2 weeks. I'm guessing that for your purposes, missing by being later is better than being too early. I can either put it on now, or you can remind me on my talk page in a couple of weeks and I can put it on the list then. Let me know what you want to do! -- Wendy (talk) 03:12, August 14, 2011 (UTC)

If I put it in now it will probably go up either the first or second week of September. There's an outside chance it would be the last week of August or the 3rd week in September. That's why I suggested pinging me in a week or two to put it in then... It's not really an exact timeline as a lot of factors influence when it gets scheduled. You don't need to have an image, although you are welcome to suggest one, and I will pass the idea along to the people who make the spotlights; if you don't they will try to pick an image from the wiki. Right now wikis can't choose the tagline text. -- Wendy (talk) 04:15, August 15, 2011 (UTC)

Hi, there's something I was hoping you could do for me...

On the homepage, in the big box of suggestions, it has the category "Pegans". Do you think you could change it to "Pagans" for me?

I know it's kinda dumb, but I'm something of a grammar-nazi and it's just been driving me nuts for months. I can't edit the page myself and I just got the idea to ask someone who can by visiting the history page and going from there.

For some weird reason, a user left a great and very lengthy message on my blog, but did so three times, which crowds the page. You're an admin, so could you delete two of the messages, and just leave one of them? Thanks. -- ImperiexSeed, 12:50 PM, Octover 11th 2011

Would you like to browse episodes with a map? Edit

Hi, I'm a member of Wikia's Community Support Team, and we think Supernatural would be the perfect wiki to test out a new feature. I've described the whole thing over here and would love your input. Thanks! --Dopp

Yes, I think it would too, and yeah, getting the opinion of normal users would be good. So, it's alright with me, just make sure it's wanted by others. -- ImperiexSeed, 10:09 PM, November 22nd 2011

Wonderful! The feature is enabled, and I've created a sample on this page. To add it to other pages, simply switch to Source Mode in the editor and click the button that looks like this. Then enter the city and state (or more a more specific location) and it will auto-generate latitude/longitude coordinates. I also recommend setting the width, height, and zoom level as you see in the example. Please leave any feedback, requests, or suggestions on my talk page. Happy editing! --Dopp

do you know misha collins will continue wiht castiel´s role?

Hello, following the admin asking me if I had any ideas for a page, I came up with dreamwalking, as many beings, Angels, Archangels, Sephirms, Higher demons ect can go into peoples dreams, and even manipulate them, well he's unsure wether it should have a page or it should be classed as a form of telepathy, so we decided to ask other uses what they think of it, so if you would be so kind as to tell him what you think, it will be much appreciated, thank you. General MGD 109 19:48, February 25, 2012 (UTC)

Hi, I had the same pic used for the s8 banner on the homepage, and since they were blurry, pixelated, and small, I took the liberty of making HD versions and uploading them, in a few colors, would u want to set one of em up on the homepage since you are an admin? Winchester7314 07:30, June 15, 2012 (UTC)

Actually slash that S8 banner for the moment, i hv uploaded the 4, but see a few needed changes, you will see when i reupload them, they will be file named Supernatural Season 8 Banner (color) HD.png and will have dogs. Winchester7314 08:22, June 15, 2012 (UTC)

I was just wondering if you would like pages for the tie-in novels? I have most of them and can provide information on the characters that only appear in the books. Professor Awesome 23:10, June 23, 2012 (UTC)Kesslerbeast

Ok I got one of the book pages up ut don't know how I should actually you know put the recap (or whatever its called) on there, so would you mind helping me out? Thanks :) Professor Awesome 14:12, July 4, 2012 (UTC)Kesslerbeast

I mean what am I supposed to put under the section title?Professor Awesome 16:57, July 4, 2012 (UTC)Kesslerbeast

Hi Hallichester (and other admins). I am reaching out to you because Wikia is looking at some ways to increase search ranking on wikis, using some of the new markup that is part of HTML5. We are looking for a few wikis on which to test this, and I understand that you guys here at Supernatural have been open to being a test site before. There would be no visible changes to any pages, it's all going to be wikitext markup, specifically in your infobox templates. There would be nothing for you to do, we'll just let you know what we've changed when we're done. There is almost no chance that this would have a negative SEO impact; at worst it would have no effect, but it will hopefully make your wiki come up higher in search results, and we'll certainly let you know what results we see! Please confer with the other admins as needed and let me know if you guys are okay with this, or if you have any questions. BTW, I'm a big fan myself, since season one, and looking forward to season eight! BertH (help forum | blog) 21:50, August 13, 2012 (UTC)

Hey, since your last edit was still fairly recent, thought I might point you to Talk:Wincest since you were involved in the last discussion regarding its deletion. Take a look if you'd like, cheers. Calebchiam Talk 01:24, September 18, 2012 (UTC)

Your rights have been or will be removed due to Inactivity and Community Decision.

Retrieved from "https://supernatural.fandom.com/wiki/User_talk:Hallichester?oldid=378290"
Community content is available under CC-BY-SA unless otherwise noted.