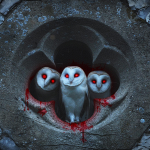 aka The Dark One and Keeper of the Gods

The uploading of pictures for personal use is not tolerated. Your picture has since been deleted. Dtol (talk) 19:32, April 29, 2018 (UTC)

Please read our policies, that would save us a lot of time. Our wiki isn't a web host and we don't allow fanfiction, and you don't get an exception to the rules when we've taken action against all the others. The specific rule can be found here: here (link). Zane T 69 (talk) 21:31, April 29, 2018 (UTC)

You have been blocked for three days for ignoring warnings and attempting to erase them despite multiple warnings. You deserve far worse and further attempts will be met with upgrades to the block. I'm tired of this bratty behavior. Your talk page is a public record of your behavior and is not for destroying evidence of said behavior. Ten minutes after this message, if you remove warnings again, I will block you for a week and if you repeat it then it will be increased to a month and grow by an additional month from there per offense. Zane T 69 (talk) 18:35, March 6, 2019 (UTC)

Apology accepted. I may have confused your repeated reversions with another users who kept removing warnings and blocked you for it, but still the three days is the minimum block length. That said, I'm sorry also. We only have the wall to document warnings and the block log to document blocks. Zane T 69 (talk) 14:17, March 25, 2020 (UTC)

Retrieved from "https://supernatural.fandom.com/wiki/User_talk:Divinemutantpower1384?oldid=395612"
Community content is available under CC-BY-SA unless otherwise noted.