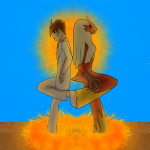 Hi, welcome to Supernatural Wiki! Thanks for your edit to the Pestilence page.

Calebchiam would be the best guy to talk to about these matters. Although I have not come across an explicit rule against bots, I do not have the experience Caleb has. FTWinchester (talk) 03:55, January 26, 2016 (UTC)

If it means the betterment of the wiki, then I'm all for it. Although I've seen that bots have a tendency to overwhelm a Wiki's Activity page. We might probably miss some user's vandalism or major changes on a high traffic page. RaghavD"I'm a CLASSIC man" 05:55, January 26, 2016 (UTC)

According to our wikia policy Supernatural Wiki:Consensus , silence is the weakest for of consensus.

"In some cases, consensus can be presumed to exist until voiced disagreement becomes evident. One can find out whether an edit has consensus when it sticks, is built upon by others, and most importantly when it is used or referred to by others. However, in discussions regarding policy change, silence may not necessarily imply consent."

As nobody complained about it for over a year, the current consensus is that reapers are angels. You might want to re- start the discussion and bring your arguements into the debate. Lambda1 (talk) 11:36, January 26, 2016 (UTC)

There were two groups, one supporting that reapers are angels, and another one who were against this classification of reapers. http://supernatural.wikia.com/wiki/Talk:Angels#Angels_and_reapers.3F The conversation did not only took place on the reapers page. However, as nobody complained about it for over a year, that's the current consensus. Feel free to bring in your arguments, that might leed to a more profound consensus. Lambda1 (talk) 11:47, January 26, 2016 (UTC)

Hey, man. Don't get me wrong. Really. I hate the retcons as much as you do. But the whole point of this wiki is to stick to canon. Everything else we want to think otherwise we have to keep in out blogs (that's why I have many blogs full of rants). I'm just upholding the wiki's rules. FTWinchester (talk) 13:13, January 27, 2016 (UTC)

Like I said on the Reapers talk page, I have no desire to impose my views or preferences on any articles. I had reason to doubt Glass's statement's validity. Some of those reasons still exist, but the writers decide everything on the show; not us (fans). What they say goes.

Not different at all, in fact what i was trying to say is that I completely agree with you. By all means if you find any speculation especially statements using words like possibly or most likely, remove it. I've been doing it for years. If anyone gives you trouble go to the talk page and then the admins if it continues to be a problem. Bkshadows (talk)

Hi. Just letting you know I've seen your message, and I'll need a while to check out the specs of this request - currently caught up in other matters. Thanks for your work! Calebchiam Talk 04:13, January 30, 2016 (UTC)

Hey, could you state exactly what kind of tasks you would like to automate using the bot? Cheers. Calebchiam Talk 14:42, January 31, 2016 (UTC)

Sure, I've handled bot requests so I'm aware of this actually. I just wanted to know what tasks you had in mind. Bot account username? I'll go ahead and grant you the rights. Calebchiam Talk 03:38, February 2, 2016 (UTC)

Right, I'd forgotten that the special allowances 'coats get on the RuneScape Wiki aren't universal. In any case, not that I speak on behalf of Supernatural Wiki, but I don't think there'll be any opposition to your running a bot for said tasks. Cheers. Calebchiam Talk 04:40, February 3, 2016 (UTC)

Retrieved from "https://supernatural.fandom.com/wiki/User_talk:Orion_Invictus?oldid=178799"
Community content is available under CC-BY-SA unless otherwise noted.