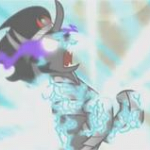 I first saw Supernatural when Season 4 had finished on TV but was not yet on DVD. I actually saw it before Buffy, and Buffy before Charmed, so I was unfamiliar with a show with Monsters of the Week not affiliated with the main villain.

Of course, there just being three seasons on DVD at the time, it wasn't that hard to watch all episodes. If I tried getting into it today, there's 14 seasons now, I'd have to be really sure I liked it before trying it, especially since it's not on Netflix anymore. (Even Charmed I first started on Netflix to be sure it was my kind of show, and while 8 seasons is still kinda long, I think that should be the limit, and even then I was watching it to kill time for a hiatus on another of my favorite shows, finishing the day before it continued)

Pretty high on my list of favorite shows, despite it never ending, and though I might just FanonDiscontinuity Seasons 14 and above, and come up with a simple headcanon to resolve the cliffhangers, the show did good to not lose me for 13 seasons. Though I DID take a long break at the beginning of Season 8.

Unsure. Season 6 had some awesome episodes but it revealed Crowley to be evil, and kinda made Castiel a villain too. Season 13 was pretty good for such a late season of a show (they should never go on that long). 9 was interesting with two main villains, one taking over Heaven, one taking over Hell.

I can watch most of the scenes in the Saw movies without flinching, but sometimes scenes can go beyond my boundary for fictional ultraviolence.

Retrieved from "https://supernatural.fandom.com/wiki/User:KillRoy231?oldid=335389"
Community content is available under CC-BY-SA unless otherwise noted.