Edit
watch 01:23
Wiki Targeted (Entertainment)
Do you like this video?
Play Sound 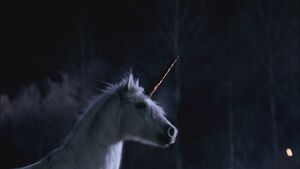 A Unicorn, according to the lore, is a mythological horse creature that has been described since antiquity as a beast with a large, pointed, spiraling horn projecting from its forehead.

An employee of the pizza chain, Howard, is using magic to kill children's parents, with a manifestation of their children's fear. One of the victims of circumstances is a man who is killed when he is impaled by the horn of a unicorn.

A unicorn skull could be seen in Magnus' hideout, proving they either do or did actually exist after all.