Gabriel (guest star Richard Speight Jr.) is back and drags Sam and Dean into his plot for revenge on the demigods who sold him to Asmodeus. Meanwhile, Jack's inflating confidence leads to reckless decisions that could put others in harm's way.

In Central City, Colorado, a man comes from the direction pointed to by a neon sign reading “liquor.“ His steps are a little unsteady, and he drinks directly from a bottle of alcohol. A spaghetti-western style tune plays, and as the man looks around for the source, a familiar voice calls out to him, Fenrir Odinsbane. A man steps from behind a dumpster and removes the golden recorder he’s been playing from his mouth. Fenrir is surprised to see that the man is the archangel Gabriel. The two square off: Gabriel reveals a wooden sword and Fenrir’s lupine face glows green, superimposed on his human one. As they fight, Fenrir is surprised to note that Gabriel bleeds when slashed with Fenrir’s claws. Gabriel concedes the point as Fenrir grabs him from behind. Gabriel kills Fenrir by stabbing him, shoving it through his own abdomen. Gabriel—bleeding more profusely now and unsteady on his feet—pulls a sheet of paper from his pocket, and we see that Fenrir is the first name on a list of figures from Norse mythology. Narfi and Sleipnir are next; because of the way Gabriel holds the list, any further names are obscured by his thumb. He uses his own blood to cross out Fenrir’s name and puts the list back in his pocket.

Dean speaks to someone on the phone while arguing with Sam. He tells Castiel to contact him when he reaches Amarillo, Texas, then hangs up and devotes his full attention to the argument. He is frustrated: they’ve been searching for Gabriel for two weeks while Mary and Jack are in danger. Now, Rowena has tracked Gabriel‘s “essence“ to two places: Texas, where Castiel has gone to check thing out, and wherever Sam and Dean are. The brothers’ argument is interrupted by an insistent knock at the door. They arm themselves and open the door—room 3—to find none other than Gabriel, who is clearly injured.

In Apocalypse World, Jack excitedly tells Mary that he killed Balthazar in battle and that Bobby is on his way back with 30 survivors. He notes that Mary doesn’t seem happy to hear that they’ve won their 3rd battle in a row, and she tells him that they are running out of space and supplies. She’s not sure how they’ll take care of everyone. Their conversation is interrupted by the sound of someone approaching. Mary draws her gun but lowers it as a man she calls Jacob steps into view and apologizes for startling them. He brings news: their spies outside of Michael’s fortress say the angels are leaving. Mary and Jack share a confused look, and Jack wonders aloud why they would do that.

Back in Colorado, Gabriel tells Sam and Dean that he could feel Rowena’s tracking spell. Given his condition, Sam and Dean ask Gabriel what sort of trouble he’s in. Gabriel lies, deflects, and asks if the Winchesters have more of his grace. Dean tells him that they used what they didn’t return to him to open a rift. At this, Gabriel attempts to teleport away but is too badly injured.

Meanwhile, Fenrir’s brothers have discovered his corpse. Sleipnir remarks flippantly on Fenrir's drinking; Narfi admonishes him for disrespecting their brother and then tastes some of the blood on the ground, declaring it to be archangel blood. Sleipnir nervously takes out his phone to call their father.

In Apocalypse World, Jack confirms that the angels seem to have abandoned their post. Mary warns that it could be a trap, but Jack insists that they should go and see what the angels have left behind. He believes Michael has fled out of fear, but Jacob tells them that after fighting Michael for eight years, he knows that nothing frightens Michael. Jack, looking pleased, says that he’s winning and promises to protect the others. Mary looks unconvinced.

Back in the motel, Gabriel jolts awake and is momentarily disoriented. Dean tells him that they need his help, but he refuses, once again. Before he can leave, however, Fenrir’s brothers kick open the door. they advance, menacingly, and display glowing green faces just as Fenrir did. Sleipnir has a horse head, while Narfi’s face looks like a skull. As they attack, Gabriel tells the brothers Winchester that the other two are Norse demigods. He initially appears to hide as Sam and Dean get beat up but then stabs Narfi with a wooden sword, killing him. Sleipnir runs, and Gabriel, who has re-aggravated his injury, is too weak to give chase. Dean pulls out angel handcuffs and tells Gabriel he’s not going anywhere.

Jack, Mary and the other rebels enter Michael's stronghold, seemingly abandoned. After looking around, Jack finds a map with miniature soldiers representing Michael’s armies on it. They are all clustered in one place. Jacob and the others enter, bringing with them Kevin Tran, who they found in the dungeon. Jacob accuses Kevin of being a traitor for working with Michael, but Kevin insists that they don’t understand. He was a skeptic, but then the apocalypse happened. Everyone around him died, but he was chosen by God. “What does that even mean,” he asks them. He says that Michael misled him, that he told him he wanted to save the world but then destroyed it. An increasingly agitated Kevin tells them that Michael threw him in the dungeon when he couldn’t perfect the spell, but that he “fixed it.“ Mary tries to calm him down and asks about the spell and Michael’s plans. Kevin tells them that Michael has gone to a place where the walls between worlds are thin. From there, he will use the spell from the angel tablet. Jack finishes the statement that Kevin leaves hanging: Michael is going to invade their world.

Back in Colorado, Sam and Dean have disposed of Narfi’s body and insist Gabriel explain himself. Gabriel tells them that the Norse demigods, who he says are more accurately “god-begotten monsters,” gave him a place to hide until they suddenly kidnapped him and sold him to Asmodeus. Gabriel tells the Winchesters that the Norse brothers needed to get rid of him before Lucifer caught them sheltering Gabriel, but that they sold him to Asmodeus purely for profit. Now he wants revenge. Sam asks why there are four swords if there are only three brothers, and Gabriel tells them that the fourth sword is for the demigods’ father: Loki.

Back in apocalypse world, Jack and Mary disagree on what comes next. Jack wants to go and wipe out Michael’s armies; Mary advises caution, again, saying that it could be a trap. Kevin agrees with Mary, saying Michael never does anything without a reason. Mary begs Jack to be cautious and remember that Michael has killed every one of his enemies.

In Colorado, Gabriel recounts the story of how he saved Loki from torture and imprisonment then cashed in on that favor owed by taking Loki’s place to hide from his angelic family. This arrangement also helped Loki, who had run afoul of Odin and needed to lay low. Dean callously minimizes Gabriel’s pain, self-righteously dismisses his quest for vengeance, and insightfully reminds them that vengeance never goes well. Sam suggests that they help Gabriel in exchange for Gabriel’s help against Michael, and the archangel agrees.

Mary begs Jack not to go off and face Michael alone. She says she gets it, but he can’t protect the people in their care if he gets himself killed, and she “can’t lose another boy.” Jack prepares to leave anyway, but Kevin stops him, revealing a suicide sigil carved into his flesh. Kevin is distraught over the things he has done and desperate to escape, to see his mother again, which Michael has promised will happen when Michael lets Kevin into Heaven. Mary tries to talk him out of it, telling him that Heaven is an empty loop of memories, and Jack tells Kevin the spell won’t kill him. Kevin says that isn’t the point: Michael wants to break Jack by making him watch the others die. He activates the sigil, which produces an explosion that kills him and the rebels present, save Mary, who Jack is able to shield from the blast with his wings.

Meanwhile, Sam, Dean, and Gabriel reach the hotel where Loki and Sleipnir are. Gabriel kills Sleipnir, then rushes off to stop Dean from killing Loki before he has the chance to. In the penthouse, Loki asks if Dean wants to know why Gabriel wants him dead. He tells him that he blames Gabriel for the death of his father, Odin. Dean points out that Lucifer, not Gabriel, killed Odin, but Loki tells Dean that Gabriel broke their deal by getting involved with angel affairs again, which led to Odin’s death. Loki says that while he and Odin disliked each other, Loki didn’t want his father dead. Dean stabs Loki, only to find that he is a hologram.

In the hallway, Loki taunts Gabriel as he beats him to a pulp. He continues even as Sam and Dean arrive and give Gabriel the sword he needs to kill Loki.

Loki mocks Gabriel for needing someone to save him again and calls Gabriel a joke and a failure, saying he stands for nothing and will eventually die for nothing. Telling Loki "you first," Gabriel drives the sword through Loki's heart, killing him.

Back in Apocalypse World, Jack cradles Mary, who is still unconscious, as he looks upon the carnage caused by the explosion. Later, Mary tries to console Jack, who wonders what the point is if he can’t keep people safe.

On Earth, Gabriel thanks the brothers for their help and asks what the plan is for defeating Michael, saying that a deal is a deal. Sam asks Gabriel how he feels now that he has his revenge. Gabriel says, unconvincingly, that he feels great – like a new man. Sam doesn’t press the issue.

Back at the bunker, Sam reports that Cas is helping Gabriel settle in, Rowena is preparing for the spell, and they’ll be ready to go once Gabriel’s grace is adequately replenished. He then confronts Dean on going after Loki alone and leaving Sam behind to go to Apocalypse World with Ketch. Sam accuses Dean of sidelining him. Dean reminds Sam that the last time there was a Lucifer v. Michael showdown, Sam died and went to Hell. He tells Sam that he doesn’t really care what happens to himself and never has, but that he does care what happens to Sam. Sam tells Dean that they’re going to save Jack and Mary together, that if something happens they’ll handle it together, and that if they die, they’ll do that together as well. 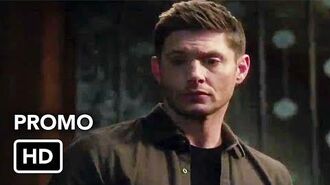 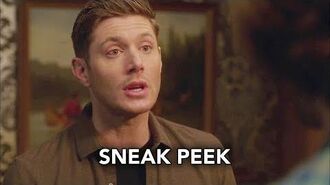 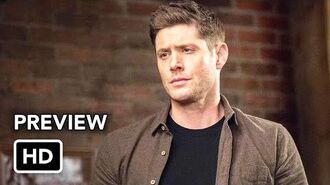