There's Something About Mary

There's Something About Mary

Sam and Dean are alarmed when they learn hunters are being killed by suspicious "accidents" all over the country. They decide it is best to find Mary (guest star Samantha Smith) and make sure she's safe. Meanwhile, Toni (guest star Elizabeth Blackmore) is back in the states and she and Mary face off.

Ketch is seen controlling a hellhound, using it to kill Eileen Leahy. Meanwhile, Sam and Dean show up at Mary's motel room in search of her after the previous voicemail she'd left Dean in Twigs & Twine & Tasha Banes. They find no sign of Mary, Dean even mentioning that it looks like she hasn't been there in a while. He calls Ketch, getting no help about the whereabouts of Mary. Moments later, Sam gets a call from Jody, who informs him of Eileen's death.

Sam and Dean go to do some investigating, and attempt to piece together the recent deaths of other hunters. They soon realize that Eileen's wounds are, in fact, from a hellhound, and not a wild animal as they were told. They aren't sure why her death was inflicted by a Hellhound, nor do they know why she fled Ireland.

They find that Eileen has mailed her a letter four days before she had died, the letter stating that she fled because she was afraid. She suspected that the British Men of Letters had been spying on her, mentioning they had tapped her phone and hidden bugs at her place. Sam and Dean, now having that in mind, return to the bunker to search for any hidden cameras or microphones. Once discovering that they are being spied on, they set up a false meeting, knowing that the Men of Letter's will show up.

Mary is being held by the Brits, and we get to see her paying a visit to an old friend, who is of course a hunter. She suggests he join her on a hunt, which he agrees, but when he turns his back she attempts to stab him. He spins around and manages to slice her left hand open with a broken beer bottle, but she quickly slits his throat and finishes the job. Mary wakes up, finding herself questioning reality as memories flash by of her being tortured by the British Men of Letter's.

Toni enters the room to shed some light on the matter, explaining that they are brainwashing Mary to use her skills to their advantage. Toni mentions that she needs to stop reminiscing on her past life. She reveals that once Mary died, John had abused Sam and Dean with drunken outrages, and weeks of abandonment in his attempts to get revenge for Mary. She tells her it wont be long until she is a better person, more pure, using her power and skill in the way it should be.

Toni takes Mary to have another brainwashing session, whilst Dr. Hess speaks with Crowley. Crowley is aware that the British Men of Letter's are murdering hunters, and is the one who provided Ketch with the Hellhound previously used to kill Eileen. They agree that they will keep their agreement of Demons only using humans who will sell their souls, and Crowley sharing information with the Brits when needed.

Dr. Hess meets with Ketch, and it's revealed that he and Toni are in competition for Mick's old role.

Mary asks to see Ketch, as she is now growing desperate to get out of this situation in any way she can. She pretends to hug Ketch, but instead reaches for his gun, turning it on herself. Ketch stops her, but she begs for him to take her life so she doesn't hurt anyone she loves. He refuses, promising her that it will be over soon.

Sam and Dean are now at the place they have set their fake meeting at. They trap two of the Men of Letter's, and manage to catch Toni. Sam keeps a gun on her while she sits in the back seat of the Impala, updating them on all that they have missed. She tells them Mick is dead, the American hunters are being killed, and Mary and Ketch had slept together. This doesn't settle well with Dean, who slams on the brakes as if to do something, but Sam stops him.

By the time they make it back to the bunker, more Brits are there waiting for them. A shootout breaks loose, and Sam and Dean manage to get everything under control, until a very far gone Mary shows up. She helps Ketch escape as planned, but before leaving he informs the boys that they have changed all the locks on the bunker, shut the water off, and when they leave, the oxygen will stop as well. They leave Toni, Sam, and Dean behind, with only two or maybe three days to live. Dean tries at the last moment to get Mary's help, but it doesn't work.

Lucifer is still locked up, with a Demon attempting to find a way to help him out. He flees behind the door as Crowley enters the room, with a deal for Lucifer. He offers that if Lucifer tells him where the baby is, Crowley might spare the child's life and raise him as his own. Crowley makes the mistake of letting Lucifer know that they baby is with Castiel, and now he is desperate to free himself. The Demon working to help Lucifer reveals that the chains are somehow reversing themselves, and converting the power from Crowley to himself. This is proven when Lucifer makes Crowley hop on one foot, stick his tongue out, and other silly things whilst he tries to intimidate Lucifer.

Lucifer breaks free of the chains, in which Crowley quickly tries to better the situation before running. Lucifer throws him around a bit, now fully powered and back to himself. Crowley is lifted from the ground, sliced up a bit, and thrown back down. He glances over to see a rat, before he is stabbed in the chest. There is, however, no reaction to the angel blade, as there usually would be when a demon is killed.

Mary and Ketch are seen talking in the car for a moment, Mary seeming brainwashed and emotionless at this point. Lucifer is also seen standing upon mountains, taking in everything now that he is free, and seeming very pleased with it.

The episode ends with a Demon asking what to do with Crowley's body, to which another responds that they toss it. We see the same rat follow Crowley's body as it is dragged out of the room, which could only hint to the thought that he has transferred himself into the rat's body before being stabbed. 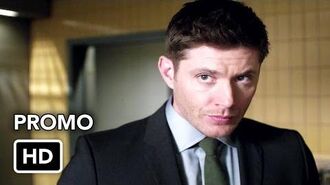