Sam is scanning the internet for suspicious paranormal activity and comes across a video of Charlie (guest star Felicia Day) beating up a district attorney. Dean suspects she's back from Oz and hunting on her own, assuming the district attorney must have been a demon. When they do find Charlie, they are shocked when she tells them why she really came back from Oz.

In a dark house, a man runs down the stairs and outside, where he falls down. Charlie approaches and says she is going to torture him.

In the Men of Letters bunker, Sam Winchester is on the phone with Castiel when Dean comes in with egg white omelets. In order to control the Mark of Cain, Dean is on a 12 step program: no drinking, 8 hours of sleep, and eating healthy. The boys are researching when Sam comes across a video of Charlie beating up someone. Dean believes there has to be a reason. Further research reveals another victim, both in Topeka. They decide to check it out, and while packing weapons Dean's hand shakes.

In Topeka, Sam and Dean question the torture victim. He tells them that Charlie wanted to know about the Middleton drunk driving case. While a concerned Sam watches, Dean threatens the man until he admits that he gave Charlie a name, Councilwoman Barbara Cordry. Charlie is tracking driver that killed her parents.

On the way to Barbara's house, Sam reviews Charlie's file. They find out her real name is Celeste. When Barbara Cordry is less than helpful, the boys stake out the house, as they continue to review Charlie's file. Dean continues to believe there is an explanation. A scream from the house, sends the Boys running. They find Charlie holding a knife to Barbara's throat. The boys question Charlie who makes a run for it. Dean tackles Charlie and they wrestle but she escapes. Charlie slashes Baby's tires and then pulls away, just as another Charlie pulls up. The second Charlie tells the Boys that need to catch up.

Good Charlie explains that there are two Charlies: one good and one bad. The split happened in Oz when the Wizard of Oz told Charlie that she had to release her inner darkness to win the war in Emerald City. Charlie explains that the two Charlies are connected physically but are two separate beings. The boys want to put the 2 Charlies back together. They surmise that they need the Wizard's help, but the key to Oz is broken. However, the first step is finding Dark Charlie. The Boys discover that it all leads back to Russell Wellington who it appears was the drunk driver that killed Charlie's parents. The boys split up, with Sam and Charlie returning to the Bunker to find a way back to Oz and Dean trying to find Dark Charlie.

Meanwhile, Dean stakes out the office of Russell Wellington, but at the end of the business day, Dean is forced to meet with Wellington. Dean pretends to be a potential real estate buyer. Dean finally comes clean and lays it on the table for Mr. Wellington. Dark Charlie shows up, and she convinces Dean that she just wants to talk to Wellington. Dean allows her to do this, but Dark Charlie kills Wellington instead.

Dean calls Sam to tell him what happened. Sam tells Dean to meet them at Clive Dylan's house. Before Dean can leave to meet Sam, Dark Charlie approaches him and teases him about his dark side. Dean taunts back that Sam and Good Charlie have a way to end Dark Charlie. Dark Charlie leaves and steals Baby.

Sam and Good Charlie arrive at Clive's house and explain why they are there. At first, he denies knowing anything about Oz, but then he tells them that his Dark Half is really the Wizard. He can't fix the key or Charlie. Good Charlie is worried about Dorothy. Clive doesn't know how to get back to Oz, but he knows how to get the Wizard to come to him. Clive shoots himself.

Back at the Bunker, Sam fills in Cass via phone. Sam is worried about Dean – they have to find something. A banged up Charlie approaches the Boys. She has slept for 2 days and she has had enough rest. Charlie is not good or bad, just balanced. Charlie asks about the Mark and Sam has found a book that might be helpful, but the book is in Tuscany. Charlie volunteers to check it out. Before she leaves, she tells Dean that they will fix this, meaning the Mark of Cain. Dean isn't convinced, but Charlie knows he has something that Cain didn't. Dean's eyes to flick to Sam. Dean is a Winchester. Then she forgives Dean, but he doesn't forgive himself. After Charlie leaves, Sam reiterates Charlie's words: they can do this. Then let's get to work, Dean says as he looks at his steady hand. 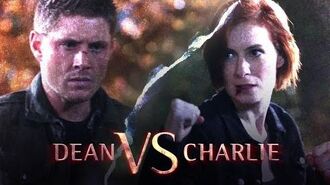