Sam and Dean together with Rowena (guest star Ruth Connell) work tirelessly to keep all of Hell from breaking loose. Castiel cannot forgive an arrogant betrayal.

Hunters watch as Hell Ghosts hit the magical barrier that was constructed by Belphegor like fireworks in the sky. They note the hits are coming faster.

In the graveyard, Rowena tells the Winchesters, Castiel, and Belphegor how her spell will strengthen the barrier. She needs a quiet, ghost-free place near the epicenter, and is taken to the Carver crypt where Sam, Dean, and Castiel first took refuge. On their way they pass by the massive hole Chuck created that leads to Hell.

Rowena tries to cast the spell, but she is overcome with the ghosts' rage and falls down in anguish -- exclaiming they're all going to die. Rowena explains that there are too many ghosts and they are too strong. Belphegor walks out, and Castiel follows. He goes to the rupture and says he has an idea, but that Castiel won't like it.

Inside, Dean preps for battle, telling Sam he isn't giving up without a fight. Sam is overwhelmed, but Dean is angry. Belphegor returns and explains his plan, which involves Lilith's Crook, which is in Lilith's Chamber in Hell. Belphegor explains that the crook is actually a horn that, when blown, will draw in all the escaped inhabitants of Hell. Rowena says she can then close the rupture - described by Belphegor as more of a tear or a wound than a portal - like healing a wound after the souls are inside using a spell of her own creation, the Sanetur Acre Vulnus. She needs Sam's help, as he's close to a seasoned witch. Someone will need to throw the "bomb" into the rift while she and Sam stay protected. Dean volunteers. Belphegor offers to get the crook, and claims he needs protection, looking to Castiel. Dean agrees, leaving Castiel feeling like he must go.

Meanwhile, Ketch wakes up in the hospital. He is about to leave when he is attacked by the demon Ardat. She wants Belphegor, who Ketch was meant to kill for her, but he is reluctant to reveal his location. Ardat then realizes that Ketch is protecting his friends. When Ketch won't give up his friends at any price, Ardat kills him by ripping out his heart. As the spell supplies Rowena needs are brought to the crypt by the hunter Stevie, Ardat texts Dean from Ketch's phone and Dean unwittingly reveals the details of their plan.

Castiel and Belphegor prepare to enter Hell through the rupture, with Belphegor taunting Castiel that the Winchesters don't care about him. Castiel pushes Belphegor into the hole and jumps in after. In Hell, they find Lilith's Chamber, which is being ransacked by a demon that Castiel quickly dispatches. Belphegor explains that the horn is safe inside a box with Enochian warding. Castiel realizes that Belphegor wanted him to come to read the Enochian. Castiel recites the words -- verses singing praise to Lucifer -- but nothing happens. Belphegor points out that maybe it needs to be sung, so Castiel sings the Enochian and the box opens. Just as Castiel is handing over the horn, Ardat appears and attacks. She reveals that Belphegor has been playing a long game and wants to rule Hell. Belphegor kills her with an angel blade while Ardat is distracted and tells Castiel that he plans to use the horn to draw all the souls into himself, giving him god-like power. He pushes Castiel away and sounds the horn, causing the souls to start rushing back to Hell and into Lilith's Crook.

Meanwhile, Dean has taken up position near the hole, with the hex bag that will help close it. Rowena has prepared the ingredients, and together she and Sam perform the spell. The hex bag Dean holds starts to glow, giving him the signal to throw it down into the rupture, causing it to start to close.

In Hell, Castiel overcomes the horn's power and is able to stop Belphegor, which also stops the souls returning. Belphegor pretends to be Jack for a moment to stop Castiel, but Castiel calls him a liar and smites Belphegor to a cinder, destroying the horn in the process.

Topside, Rowena notices something is wrong and that the crook has not worked. She states that she has one last spell she can use, as she pulls out her last resurrection charm from the flesh of her shoulder. Rowena tells Sam there is a spell that will work, and will contain all the souls. Death Is an Infinite Vessel is a spell which requires only two ingredients -- the blood coursing through her veins and her last breath. This will draw all the souls into her body, where they will be trapped until, over time as her corpse decays, they will slowly be released. However, Rowena says she cannot kill herself -- she still values her own life too much. She explains that Sam, as was written in Death's notebooks, must be the one to kill her. Sam protests and refuses, but when Rowena asks if he'll let the world, and Dean, die instead, he knows the answer. Sam hugs Rowena to him, stabbing her in the process.

Castiel emerges from the hole. When Dean asks what went wrong, Castiel tells him that he killed Belphegor and the horn is destroyed. Dean is incredulous when, suddenly, they notice the ghosts being drawn into Rowena as she walks to the rift with a somber Sam behind her. With a last farewell, she jumps into the rupture and it closes behind her.

At the Bunker, Dean checks in on a grief-stricken Sam. He tells him the townsfolk of Harlan are okay, and that Ketch was found killed, probably by a demon. He reassures Sam that he had no choice about Rowena and they stopped the last apocalypse that Chuck threw their way because of it.

In the library, Dean is getting a drink when Castiel comes to ask about Sam. When he apologizes for what Rowena sacrificed, Dean picks a fight over what happened, directly blaming Castiel for Rowena's death, despite knowing Belphegor's ulterior motives. Castiel realizes that Dean still blames him for Mary's death. He confronts Dean about his anger and lack of concern for him, and says he's dead to Dean. With Jack dead, and Chuck gone, and the brothers having each other for support, Castiel says he feels it is time for him to move on and leaves. [1] 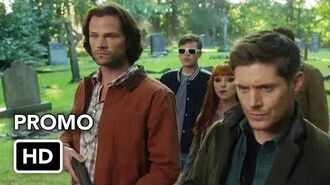 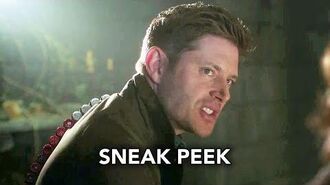 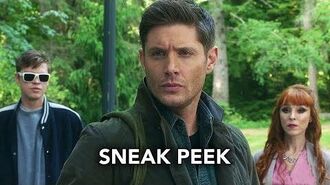