When it comes to the Stynes, Dean decides to take matters into his own hands. Sam tries to come to terms with his decision.

In Shreveport, Louisiana, a young man named Cyrus Styne exits a school building named Styne Hall. As he walks away, a group of guys stop him and start teasing him. After Cyrus is pushed to the ground, his brother Eli Styne, who is in a car parked a short distance away, notices and gets out. He asks if anything is wrong, but the bully backs down. However, later that day, Eli confronts the bully after he leaves a convenience store, and he and Roscoe Styne corner him and kidnap him, putting a plastic bag over his head so he cannot breathe.

Sam and Dean chop wood and prepare to cremate Charlie's body on the funeral pyre. As they watch it burn, Sam breaks the silence by starting to apologize to Charlie. Dean interrupts him, blaming her death on him. Sam tries to tell Dean that they were trying to help him, but Dean doesn't care and tells him that he thinks it should have been Sam who died instead of Charlie. He tells Sam to stop trying to help, before somebody else gets hurt. He then vows to find the ones responsible for Charlie's death, and says he will destroy them. Looking worried, Sam asks if it's Dean or the Mark saying that, but Dean doesn't think it matters, and leaves by himself.

In the basement of the Styne house, Monroe has chained the kidnapped bully to the operating table. He tells Cyrus that he is only good for spare parts, and that Cyrus himself must harvest them. Cyrus tries to get out of it, saying he doesn't want to, but Monroe forces him, guiding his hand with the scalpel.

Dean leaves a motel room, on the phone with a hunter named Rudy. Dean had given Rudy security footage of a black sedan, and Rudy is able to learn that the car is registered to the Stynes in Shreveport, Louisiana.

Sam goes back to the hideout where Castiel and Rowena are, and delivers the news about Charlie's death. Sam tells Cass about Dean going after the Stynes, and that he promised Dean that they would stop trying to translate the Book of the Damned. As he pulls out his phone to track Dean's whereabouts, an email from Charlie comes through. He downloads the attachment and realizes that Charlie may have been able to crack the code needed to translate the book. When Rowena confirms this, Sam decides to go forward with the plan to save Dean. However, Rowena refuses to help Sam until his end of the bargain, to kill Crowley in order to have the book translated, is fulfilled.

Cyrus sits in the basement, looking at the dead body of the bully, as Eldon flexes his new arm transplant. With tears in his eyes, he asks to be excused, but Eldon says that he will be coming with him instead.

Crowley is drinking coffee in a diner and making small talk with the man behind the counter. His phone rings, and he hears Dean's voice on the other end, saying "Hey, I need your help." The call cuts out, and he receives a text with coordinates.

The police officers take Dean to the police station, and handcuff him to a chair in front of the desk of one of the officers. Dean knocks a coffee mug full of pens off of the officer's desk, then punches the officer when he crouches down to pick it up. With his legs, he pins the officer to the ground and demands the keys to the handcuffs. After the officer hands them over, Dean knocks him out. Free from the cuffs, he finds the other officer talking on the phone about Dean. When he hangs up, Dean demands to know who he had been talking to. When the officer refuses to say, Dean raises his gun and moves forward, punching him twice in the face before throwing him on the desk. The officer finally admits he was talking to Monroe Styne.

Crowley walks around an abandoned building at the supposed meeting place. While looking for Dean, a gunshot rings out and hits him with a Devil's trap bullet, as Sam emerges from hiding. Crowley realizes Sam tricked him. Sam confesses he's been working with Rowena, and stuffs a hex bag into Crowley's pocket. Crowley starts choking and coughing up blood.

After finding the Styne estate, Dean kills three men who appear to be lookouts, stabbing one and shooting two. He then enters the house, which is dark for the first several seconds, until the lights switch on without warning, and a group of men with guns appear over the stair railings above Dean. Monroe appears among them as Eli sneaks up behind Dean and pulls a plastic bag over Dean's head.

Crowley continues coughing up blood. Sam tells Crowley that he is going to watch him die. Crowley admits that he is a monster, and, his eyes turning a demonic red, that he has enjoyed every minute of it. Standing up, pulls the bullet out, and sends Sam flying across the room with a flick of his hand. He considers killing Sam, but at the last minute lets him live to give a message to his mother on her plea for a war being accepted. He leaves the area, refreshed.

Dean, unconscious, has been taken to the basement and tied to the operating table. When he regains consciousness, he tells they shouldn't do it while they believe he is begging until he explains that he can't die because of the Mark on his arm, he informs them that he will be resurrected as a demon but this doesn't stop them. Though they are surprised, they are still intrigued by dissecting a man who can't die. As Monroe lowers the scalpel, Dean breaks free from his restraints. Headbutting Monroe, he grabs a knife and slices Eli's throat. He next kills a woman with a syringe that she was trying to inject into Dean, and then grabs Monroe and breaks his neck when he tried to inform him of his family and home's fate. Dean then goes about a rampage on the mansion.

Sam lets Rowena know he failed to kill Crowley, and then receives a call from Castiel, who is at the Styne estate, looking at the bloody bodies of the Stynes. He tells Sam that Dean was there, and that he killed at least fifteen people, brutally. He also tells Sam that Dean is headed back to the Bunker.

Eldon, Cyrus, and Roscoe find their way into the Bunker and start making a pile of books and Dean's possessions to burn. Roscoe goes off on his own to the dungeon and staggers back a few minutes later, before he dies after having been stabbed in the back by an arriving Dean who is covered in blood. Dean confronts Eldon who gets ready for a fight and gloats about killing Charlie before saying he can handle Dean this time by revealing his new arm. Unfazed, Dean tells him to be silent as he reveals he has slaughtered Eldon's entire family for his actions and proceeds to tell the shocked Eldon that he may upgrade his body but he only has one brain. Confused, Eldon questions this as Dean proceeds to shoot Eldon in the head, killing him instantly. He then turns the gun on Cyrus, who pleads for his life, desperately trying to prove he is nothing like his family by showing no surgery done to him and how he detests them. Dean hesitates, then pulls the trigger anyway, killing Cyrus and avenging Charlie's death.

Moments later, Castiel arrives and criticizes Dean for killing a defenseless boy. He stops Dean from leaving, saying that he and Sam are only trying to cure him. He tells Dean that he can't fight the Mark forever, that it's only a matter of time before he turns and everyone but him will be long dead and he will watch him slaughter everyone. Dean again attempts to leave, and Castiel stops him. Dean punches Castiel and beats him mercilessly, until he is bleeding and semi-conscious on the floor. Dean pulls Castiel's angel blade from his coat, and prepares to stab him with it. Castiel looks up and pleads with him.

After a pause, Dean stabs a book next to Castiel's head, then turns and walks out of the room, with a warning for Sam and Castiel to stay away from him, because next time he wouldn't miss. 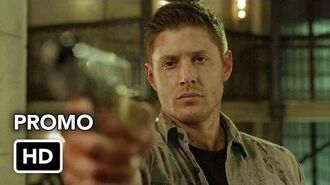