The One You've Been Waiting For

The One You've Been Waiting For

Celebrating The Life Of Asa Fox

After learning that the soul of Adolf Hitler has been trapped in a 1930s gold pocket watch, Sam and Dean must act quickly to prevent a group of Nazi necromancers from resurrecting the Führer.

In Columbus, Ohio, a wealthy-looking woman enters Marv's Lost Treasures, Antiques, and Collectibles. The woman, Mrs. Lloyd, is seeking to buy a solid gold pocket watch from 1931 that bears the Nazi emblem. The shop owner, Marvin Brickell, says that the price has increased and that if Mrs. Lloyd refuses to pay up he can always find another buyer. Suddenly, the shop owner bursts into flames. Mrs. Lloyd seizes the watch, but she too erupts in flame as a shadowy figure watches from the staircase.

Back at the bunker, Dean is working on his laptop when Sam enters. Dean refuses breakfast, and when Sam asks him what's wrong he declines to answer. Dean shows his brother an article about the deaths in the antique shop. Dean says that the fire only consumed the bodies, leaving shop and the items in it unharmed. Dean thinks that there's a case and is eager to investigate, but rebuffs Sam when he attempts to talk to him.

The Winchesters arrive at Marv's and see where Marvin Brickell and Mrs. Lloyd died. Sam scans for EMF and tells Dean what he's learned about Marvin as he looks through Marvin's email. Sam pulls up messages about the pocketwatch as Dean explores the shop. Noticing scuff marks on the floor, Dean pulls a bookshelf away from the wall to reveal a hidden door. As Sam learns about Marvin's sales of Nazi-related artifacts, Dean investigates an office full of Nazi uniforms, photographs, and other memorabilia. Sam and Dean are shocked by the sheer volume of objects in the office. Sam states that the watch was owned by a member of the Nazi High Command. The Winchesters realize that they are dealing with the Thule Society, connecting the dots between the mysterious combustions and Marv's collection of Nazi artifacts.

A young couple enter an apartment, kissing. The woman, Ellie, chatter nervously before excusing herself and going to the bathroom. Suddenly, she hears her door burst open and peeks out to see two men, one older than the other, menacingly approaching her date. He bursts into the flames, just like Mrs. Lloyd and Marvin Brickwell. The two men chase Ellie, but she evades them and climbs down the fire escape, cutting her foot in the process. The older man stops the younger, his son, from shooting Ellie, saying that they have what they need to track her as he wipes up some of her blood with a handkerchief.

In a diner, Sam and Dean talk to Aaron Bass. Aaron is in Berlin, Germany, and has been using his grandfather's ledger to track down and kill members of the Thule with the help of his Golem. Aaron tells the brothers that the Thule have a mission referred to as "Das Blut" that translates to "The Blood". Aaron doesn't have information about the mysterious pocket watch. Sam is notified of the combustion at Ellie's apartment and the two brothers head to the scene.

As Ellie is waiting in the back of a police cruiser, the son of the older man, Christoph Nauhaus, opens the door and handcuffs her. He drives off with Ellie as the Winchesters exit the apartment building. Spotting Ellie, they follow her and her captor to a parking garage where Christoph intends to switch vehicles. However, he can't find his keys and calls his father. The two argue and Christoph, distracted, doesn't notice that Dean has his gun on him. Sam rescues Ellie and the brothers take Christoph to a vacant office in the garage.

In the abandoned office, the Winchesters tie Christoph to a chair and do their best to explain the situation to Ellie. Christoph refuses to answer any of Dean's questions and taunts him, saying that  Dean should just kill him. Dean motions to Sam to shield Ellie and prepares to shoot. Christoph immediately begins to talk as Dean takes aim. According to Christoph, the pocket watch dates back to the second World War. It belongs to his father, Commandant Nauhaus, a member of the Thule High Command. Near the end of the war, as Hitler was preparing to commit suicide, Nauhaus stopped him and told him of "another way". Nauhaus encased the Fuhrer's soul inside the watch, but the watch had been missing since the end of the war. Now that the watch has resurfaced, the Thule are planning to resurrect Hitler. However, according to Christoph, Hitler can only possess a direct descendant, which Christoph indicates that Ellie is. Ellie insists that that isn't true, that her mother had traced her family back to the Mayflower, but Christoph reveals that she was adopted and explains that the Thule have been watching her. To prove this, he recites increasingly specific details about Ellie's life until she storms off.

Sam follows Ellie and learns that she'd called her mother, hoping she could dispel Christoph's claim. However, Ellie's mom confirms what Christoph said is true and Ellie bursts into tears. Back in the vacant office, Christoph tries unsuccessfully to initiate small talk with Dean. Outside the office, in the parking garage a limousine enters with Commandant Nauhaus inside. Nauhaus is holding the cloth stained with Ellie's blood. Sam does his best to comfort Ellie, saying that he understands the situation she's in. He confesses that he was meant to bring back Lucifer. Ellie says that she doesn't believe anything she's heard and makes to leave. Dean enters and tells Ellie that this is their chance to destroy the Thule once and for all. As they talk, the Thule enter the office where Christoph is tied up. Sam and Dean hide Ellie and go to confront the Thule. The brothers are losing badly when the Thule receive messages in their earpieces and leave abruptly.

Sam goes to check on Ellie, but she is nowhere to be found. On the street, Ellie walks by the limousine from earlier as Commandant Nauhaus opens the door and pulls her inside. Sam leaves Ellie a voicemail, saying that he and Dean can protect her from all of the "Hitler stuff". Nauhaus overhears the message and is angry that his son told the Winchesters about the plan. Christoph and his father begin to argue with one another. Back in the diner from earlier, Sam and Dean try to figure out how they can track Ellie.

The Thule limousine parks next to an airplane hanger at an airport. Ellie is put on a gurney and sedated as Commandant Nauhaus orders the purification ritual to begin. Nauhaus tells another Thule member, Fritz, that Christoph is tired and needs to rest. Christoph realizes that his father is ordering his execution and pleads for his life. Before Fritz can shoot Christoph, he receives a message through his earpiece. When Fritz is distracted, Christoph disarms and kills him before escaping.

At the diner, Sam and Dean are discussing Ellie when Christoph appears and sits down next to Sam. Dean aims his gun at him, but Christoph offers to help them find Ellie in exchange for protection. To prove that he is serious and trustworthy, Christoph tells the brothers that there is a Thule watching them and that he killed one after his father ordered his execution. The Winchesters agree to the deal.

Outside the hangar, Nauhaus stands over Fritz's body, admiring his son's courage. The Thule wheel Ellie towards medical equipment as the Impala pulls up to the hangar. Sam handcuffs Christoph to the car and the brothers load up with weapons from Baby's arsenal. Dean excitedly grabs the grenade launcher before Sam nixes the idea, to Dean's dismay. Inside the hangar, Ellie is hooked up to a device that is taking blood from Nauhaus and pumping it into her veins. Outside, Sam and Dean dispatch the guards and enter that hangar. The Thule place the pocket watch containing Hitler's soul onto Commandant Nauhaus' chest. The watch creates a swastika-shaped incision and sinks into Nauhaus' chest. The incision cauterizes itself instantly and Nauhaus leaps up from where he'd been laying, laughing maniacally. He is possessed by Hitler, who jumps up and down and greets the other Thule, Hans, Wolfgang, and Gottfried enthusiastically. Hitler then notices Ellie, calling her his great-great-grandniece. He thanks her, but then tells his men to drain her blood and feed her to the dogs. The Winchesters are overpowered by the Thule and brought to Hitler. Dean believes he is addressing Nauhaus, calling him "father of the year", but Gottfried demands that Dean address the Fuhrer with respect. Sam and Dean realize that Nauhaus is possessed by Hitler.

As Hitler taunts the Winchesters, Ellie watches in a daze as the Thule place the Winchester's weapons nearby. While the Thule are distracted by Hitler screaming for his plane and ordering his men to feed the brothers to the dogs, Ellie moves towards the guns, grabs one, and shoots and kills a Thule. Dean seizes a gun from the dead Nazi and advances on Hitler, punching him and knocking him to the ground. Dean shoots Hitler in the head, saying "Heil this". Sam marvels at his brother, saying "You killed Hitler." As Sam, Dean, and Ellie make their way to the Impala, Dean boasts repeatedly that he killed Hitler. They free Christoph and Sam reminds him that he'll be hunted by the Thule for the rest of his life.   Back in town, Sam walks Ellie to her apartment door. Ellie thanks him and Sam departs. In the Impala, Dean mentions a bakery that boasts the best pie for a thousand miles. Sam, surprised by the reappearance of Dean's appetite, smiles when Dean states that he killed Hitler and is deserving of pie. Sam asks if he's ever going to hear the end of this and Dean admits that it's unlikely. 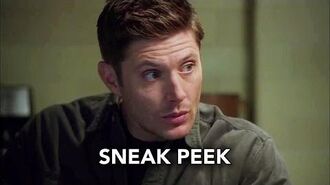