The Impala is Dean's trademark black 1967 Chevrolet Impala. It was passed down to him by his father, who bought it in 1973 after a future Dean convinces him to buy it over a 1964 VW Van in the episode In the Beginning. According to Dean the car has 327 Engine and a Four Barrel carburetor. It bears a Sedgwick County, Kansas license (though their hometown of Lawrence, Kansas is actually in Douglas County) plate KAZ 2Y5, a reference to Kansas, the Winchesters' home state, and 2005, the year the show premiered. Starting in the episode 2.20 What Is and What Should Never Be, the car sports a new Ohio license plate (CNK 80Q3).

The trunk holds an amass of weapons that are modified and crafted to aid The Winchesters in their hunting activities. Dean refers to the Impala affectionately as "Baby." Baby is going to be an episode in season 11 of Supernatural. It is called "Baby".

The car has been prominently featured on the series, beginning with the teaser of the pilot which shows John Winchester holding his two sons as he sits on the car and watches his house burn. The car is Dean's most prized possession, and he protects it with nearly the same ferocity with which he protects his family. Despite this, however, he attacks the car's rear with a crowbar after a talk with Sam in the episode Everybody Loves a Clown due to the pressure from his dying father's secret about Sam. The car had been previously damaged when a semi-truck blindsided it in the season 1 finale, Devil's Trap  In the pilot episode, the trunk is revealed to hold various weaponry to fight the supernatural.

After Sam inherits the car following Dean's death in the third season finale, he revamps the radio with an iPod. The car is later returned to Dean in Season 4, when Dean comes back from Hell. It has had some minor damages here and there throughout various episodes and has even had angels and demons (once at the same time) in the back seat. In Season 5, it's the Impala and all its memories that helps Sam push Lucifer back and jump in the hole.

In Season 6, like Dean, the Impala is retired until, near the end of Two And A Half Men, when Dean returns to hunting. It was possessed in Mannequin 3: The Reckoning.

The Impala doesn't stay damaged for long. Soon after Castiel leaves them in Meet The New Boss, Dean goes to fix the Impala due to it being the only thing he can do. With the help of Sam and Bobby, the Impala is fully repaired.

Due to the Leviathans cloning them and driving an identical Impala, they had to hide the Impala in order not to be detected. The car remains on lockdown. Dean has driven several cars in place of the Impala, many of which he has shown discontent.

In Survival of the Fittest, Dean asks Castiel for a favor as he will not fight. He asks him to take him to his beloved Impala where they discuss the situation and Castiel finally agrees to help kill Dick Roman. When asked what the plan is, he tells Castiel that as Dick knows they're coming, they're going to announce themselves "big." The next morning, the Impala crashes through SucroCorp's front gate and ends up impaled in its giant glass sign, having apparently been used to reach the building by the group. However, when the guards come out, Meg is revealed to be the driver, Dean having used the Impala's arrival as a distraction so he, Sam and Castiel can sneak in. The distraction works, but the Impala is slightly damaged in her crash and the driver's side window is shot out by the Leviathan guards. After Meg dispatches them, she leaves, abandoning the Impala in the sign. It's later recovered by Sam after Dick is killed and Dean and Castiel disappear.

After Dean's return from Purgatory, he found that the Impala had been fully repaired after Sam told him about the previous year, though no new modifications were done to it, which made Dean happy, considering that the last time Dean went away for a year, Sam had made several modern additions to the car. When Dean smells dog in the car, Sam claims not to know what he's talking about but later admits he hit a dog with the Impala which caused him to meet Amelia Richardson. Afterwards, he took the dog around in the car, annoying Dean as he doesn't like dogs and doesn't want them in his precious car (We Need To Talk About Kevin). As the Leviathans are gone, Sam and Dean return to using the Impala instead of stolen cars.

After the Bunker's garage is found, Dean stores the Impala there. (Slumber Party) After taking full control of Sam, Gadreel uses the Impala to get around as he can no longer teleport, but it helps Dean, Castiel and Crowley find him as he runs a red light on his way to find Abner and kill him. After Gadreel is captured, Dean reclaims the car. (Road Trip)

Dean and The Impala

Dean and the Impala have had a long, loving history together. Dean received the Impala as a gift for his eighteenth birthday. Ever since then, he has cared for it and even fixed it up when it was wrecked in the car accident at the end of season 1. Though he sometimes reacts with anger at it, he loves it very much and often talks to it as if it was a human being and not an object calling it "Baby".

When Bela tows the car away, he is very upset. Later, when he is forced to hide the car, he is, again, very upset about this fact. Dean was going to give Bobby the Impala while preparing to surrender to Michael.

Weapons in the trunk

The Impala's trunk contains a massive arsenal of weapons. They are all customized for fighting supernatural creatures. There are different types of:

Also seen in the trunk are a 37mm DefTech Grenade launcher, Brass Knuckles, a Harpoon gun, Axes, and Nunchucks. However, none of these have ever been used on screen.

There are also various types of ammunition including: Silver, Iron and Rock Salt Shells as well as standard bullets for every weapon.

As of the Season 6 episode The Third Man, The amount of weapons in the trunk has increased vastly, since all the weapons that were in Sam's car were moved to the Impala, after Castiel and an unnamed angel flattened it.

The trunk also has a Devil's Trap on it, so demons can be effectively transported within the Impala.

In an interview at a convention, Ackles said the main Impala they use has a 427 and skid plates. The actual car was bought from the Kelley family of Farmingdale, NJ in 2005. The Kelleys were the second owners of the car, they bought it from the original owners. The car was bought new in 1967 at Mathews Chevrolet in Farmingdale, NJ. It was originally baby blue with baby blue interior and dual bench seats.

For the production of the show, they have about six Impalas; only 2 work. The "Hero" one and "Stunt" one. Rumor has it, the sound comes from a tape, and is even that of a Mustang 65 instead of an Impala 67. This however, is not evident from comparing these particular sounds with the actual TV-show.

Dean-Winchester-with-Chevrolet-Impala-1967-supernatural-31507862-1450-963.jpg
Dean posing with baby for photoshoot.
Add a photo to this gallery 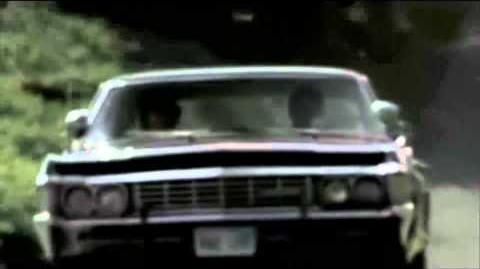 Supernatural - The Impala
Add a photo to this gallery
Retrieved from "https://supernatural.fandom.com/wiki/The_Impala?oldid=157655"
Community content is available under CC-BY-SA unless otherwise noted.