Sam and Dean hit the road to help an old friend, but it appears that their luck may have finally run out and they are the ones who may be in need of rescue.

At a Kwik Trip in Lawrence, Dean is buying snacks and beer. Dean asks the clerk Teddy what's new, and Teddy complains about his psoriasis. Teddy runs up the tab, and Dean pays him with a credit card. The credit card machine rejects it. Teddy tells Dean that his card is declined and takes the food back. Disgruntled, Dean walks out and a skater narrowly avoids him. Dean finds a ticket on the Impala and goes to the bunker. Meanwhile, in the bunker, Sam cooks and burns the meal, then knocks a plate on the floor. He continues spilling food. Dean arrives and yells for Sam. Sam comes out and Dean tells him that he got a parking ticket. He explains about his bad luck, including the credit card Charlie hacked for them that should always work. Sam sneezes and admits that he might be getting sick, and Dean wonders what's going to happen next. Garth calls and tells Dean that he needs his help.

As the Winchesters drive to Garth, Dean insists that it's more than just a bad day. He figures that it isn't normal, and Sam keeps sneezing. Sam notes that Castiel is in Heaven and seeing if anyone there knows where Chuck is, just as the battery goes out on the Impala. The Impala cruises to a halt and Dean can't start it, and insists that it's not normal. The brothers get out and start walking.

Garth is at home feeding his twin baby sons. One baby spits on Garth, and the two babies and the girl Gertie chuckle. The doorbell rings and Garth answers it. It's Sam and Dean, and Garth invites them in. Garth insists on hugging Dean, Gertie says that the twins are still hungry, and Garth takes the Winchesters to meet them. He introduces Gertie and twins, Sam and Castiel. Garth then explains that there's something wrong with his wife Bess' cousin. Brad is in bed and unconscious, and Bess explains that he's a pure-blood werewolf like her. Garth says that the cops found Brad unconscious by a road in St. Cloud, and he has claw marks on him from a wraith. Dean gets a toothache, and Bess takes Sam downstairs to get something for his flu.

As Dean and Garth go down, Garth talks about the great family he has and how everything has worked out. Dean tells him that he deserves it, and Garth asks what's up with Dean's teeth. He takes Dean to his basement where he has a dental office set up, and orders Dean into the chair.

Bess gives Sam a glass of liquid and says that it's secret.

Garth says that he was getting a degree as a dentist when he was Hunting. After he left Hunting, he got his degree and treats the werewolves.

Sam drinks the liquid while Gertie watches. Bess says that it's mostly cayenne pepper and Sam starts gagging. He complains that everything is burning, and the watching twins start crying.

Garth examines Dean's teeth, and Dean admits that he's never seen a dentist. After an exam, Garth tells Dean that he has seventeen cavities and gets a tank of nitrous. He gasses Dean unconscious, and Dean finds himself in a musical number. Garth is there and dances with him to "Let's Misbehave". Dean tap dances solo, then wakes up to find Garth standing over him. Garth tells the bloody-mouthed Dean that he did good.

Later, Bess gets the kids to bed and Sam says that he feels better. Dean and Garth come in and Garth explains that he had to numb Dean up and he'll recover in an hour. He then asks the guys who they pissed off, and Sam says that they pissed off God. He explains that God is trying to make them kill each other and explains about Chuck, and Garth wonders if he's a special guest star. Garth notes that being a hero sucks, and suggests that Chuck downgraded them and now they're having normal-people problems. He advises Dean to get a colonoscopy, and admits that they have no idea how to fix it.

Brad wakes up and calls to Bess. Sam assures Brad that they're just trying to understand what happened, and Bess digs her fingernails into Brad's wounds and tells him to fight. Brad explains that monsters fight at a place for real money, and it gets livestreamed on the Darkweb. He immediately tells them that the fight takes place in a warehouse in Belgrade, and the fangs will rip them to pieces when they walk in.

Garth tells Sam and Dean that they shouldn't go because they're normal, but Dean insists that it's their job. When Garth wants to go, Dean and Sam both agree that he should stay with his family and not risk something going wrong. Garth agrees but gets them new spark plugs.

The next day, the Winchesters drive to the warehouse and get their weapons from the trunk while Dean eats some of Bess' cheese sandwiches. Sam warns that they need to be ready for anything now that they're normal, and Dean grabs a grenade launcher. They go inside and find the arena, and Sam trips and drops his gear. Dean's stomach gurgles and runs to the bathroom. He finds a stall and throws up, and Sam figures that he's lactose-intolerant. A man, Cutty, barges into Dean's stall, training Dean's grenade launcher on him.

The man takes Dean to the arena and locks him in with Sam. Dean complains that "normal" sucks. Cutty comes in and says that it's his place, and explains that he's a shapeshifter. He says that he's a sportsman and he wants to see the Winchesters' best. A vampire fighter, Maul, comes in. Dean tells him that they've taken down demons, angels, gods, and Alphas. Cutty doesn't buy his bluff, and Maul takes them to their "rooms".

That night, the fighting begins First up is Killer Wraith versus Jamaica Djinn. Then Maul will fight the Winchesters in a battle royal. Wraith and Djinn fight first, while Sam and Dean watch from their cells. Dean manages to pry a nail loose and tries to pick the lock, but he ends up breaking a nail. Sam takes the nail but can't do it either, and Dean reminds him that their normal.

Dean figures Chuck won't let them die so normally, and Sam suggests that Chuck might teach them a lesson by having them paralyzed. His brother says that they have to win, but it won't be easy. Dean insists that it was them, not Chuck. They're the best in the world, so they should go out and kick ass.

A few minutes earlier, Garth sneaks into the warehouse and secretly frees the Winchesters. He figures that they were boned when they didn't answer their phones, wolfs out, and rips the locks off the cell doors. The Winchesters leave with him, and Cutty goes to the Winchesters' cells and discovers that they've escaped.

The crowd boos, and Garth tells the Winchesters that he already has a plan. He triggers the remote on the

C4 he planted, and the warehouse goes up in flames. Maul emerges from the debris and Garth tells the brothers that he's got it. He wolfs out and fights Maul, who slaps him across the parking lot. Dean tells Sam that he figures that they can't win, but yells at Maul to bring it on. Maul kicks him in the groin and he falls, and the brothers hit Maul without effect. Maul gets Dean in a chokehold and chuckles, and Dean manages to break free.

As the brothers prepare to fight Maul, Garth stabs Maul with a rebar. Dean's voice gets higher and he goes off to nurse his groin.

The next day at Garth's house, Dean and Sam hold the baby Sam and Castiel. Bess packs grilled cheese sandwiches, and the babies' eyes glow. The Winchesters quickly leave and Garth walks them out. Outside, Dean and Sam thank Garth for saving them and say that he was a hero. Garth tells them that he learned from the best, and says that he's heard a story about a place in Alaska where people can go if they lose their luck. He warns that there's always a catch and they might get used to being normal, and says that anything they need is theirs. Everyone hugs and the Winchesters go to the Impala. Before they go, they watch through the window as Garth and Bess dance in the living room.

Dean says that there's normal about their lives that are zero, and they might kill each other by accident. If Chuck comes back, they can't go up against him the way they are. They both decide to head for Alaska and drive off... the Impala's engine sputtering out. 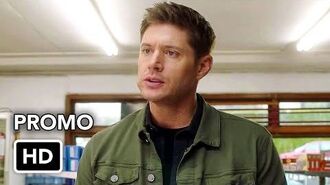