The Things They Carried

Dean, Sam and Castiel deal with Cain's (guest star Timothy Omundson) return. Crowley and Rowena (guest star Ruth Connell) continue to grow closer but when Crowley bails on plans with his mother to help the Winchesters, Rowena lets him have it.

At a prison in Texas, Tommy Tolliver, a death row inmate, taunts the guard. Later, the lights dim and Cain walks down the hallway. He appears in Tommy's cell where he stabs him, and disappears with Tommy's body.

On the way to the prison to investigate the disappearance of Tommy, Dean teases Sam about his serial killer obsession while they discuss the case. Once in the prison they question the warden, and while reviewing the security cameras, Dean recognizes Cain.

In Illinois, Castiel interrogates a demon about Cain's whereabouts. Once he gets the information he wants, Cass kills the demon and follows up on the lead. At the same time, Sam discover that Tommy's father has also disappeared. When Cass calls them, he confirms that Tommy is dead and that Cain has been busy killing people. A disturbance causes Cass to hang up on Dean and Sam, Cain has arrived, and he confirms that he is killing his descendants to rid the world of his bloodline.

Cass meets Sam and Dean at the Bunker and fills them in on Cain, now that they know Cain is killing his descendants, they believe he will go after another Tolliver, Tommy's 12-year-old son, Austin, who lives in Ohio. Dean believes that he needs to kill Cain, and despite Sam's concerns for Dean, they decide to go to Ohio.

Meanwhile, Crowley listens to a crossroads demon complain about not being given his credit for collecting souls, Rowena goads and manipulates Crowley into killing the demon for whining. Crowley knows his mother is manipulating him, but he agrees to help her with a witch, Olivette, from the Grand Coven, that is until Dean calls. Dean tells Crowley that Cain is back and has Crowley on his list of people to kill. Dean wants Crowley to bring the First Blade. As Crowley is about to leave, Rowena begins chastising him, telling him she thinks it is a bad idea to help the Winchesters.

When the Winchesters and Castiel arrive in Ohio, Dean and Cass want to use Austin as bait and again Sam has concerns. Crowley arrives and Dean makes it clear that Crowley is not part of the team. However, Crowley has a plan and he won't hand over the Blade unless Cain is trapped, Sam is worried about what will happen once Cain is trapped and what Dean will do. Dean reiterates his words from last week about going down swinging, but he didn't think it would be so soon. He admits to Sam that he is scared.

As Austin leaves the barn, Cain arrives. Cass steps in and tells the kid to run, he goes into the barn where Sam is waiting. Cain easily forces Cass out of the way and then appears in the barn. He stabs Austin only to discover that the kid isn't real, with Crowley's help, they have set up an illusion spell and the real Austin is long gone, while also trapping Cain in a large devil's trap hidden under the straw on the barn floor.

Dean insists it is his turn, Sam and Cass want to help, but Dean thinks they will be a liability in the fight with Cain, as Dean will be worried about them. Besides, Sam, Cass, and Crowley have to be there to take out whatever comes out –- whether it be Cain or a demonic Dean. Crowley hands over the First Blade while demanding a promise that Dean will give it back. Dean reassures Sam that his is good before going to fight Cain.

In their confrontation, Dean believes it is too late to save Cain, and Cain agrees. When he killed Abel, he released a stain on the earth, and extinguishing his descendants is the least he owes the world. Dean approaches Cain with the First Blade, but Cain easily rebuffs Dean's advances. He knows that Dean is holding back because Dean believes he can control the darkness if he doesn't let it all out. Cain knocks Dean down and then tells Dean that there is no beating the Mark. He reveals to Dean that he played Cass in order for him to get Dean to bring the First Blade to the fight and he easily takes it from Dean. Cain says that he is doing Dean a favor by killing him because Dean is living Cain's life in reverse, Cain started down the path by killing his brother and Dean's story will end when Dean kills Sam. Dean denies it, but Cain continues by saying that Dean will kill Crowley first—which be conflicting for him, then Castiel—which will be difficult, but killing Sam will be the act that Dean will not survive. As Cain brings down the First Blade towards Dean, Dean grabs the knife from Cain's belt and cuts off Cain's hand. Dean grabs the First Blade; he begs Cain to tell him that he doesn't have to kill him, that he can stop, but Cain confirms that he will never stop. Dean raises the First Blade and brings it down, with a wet thump and a clap of thunder, finally killing Cain.

When Dean returns, Crowley demands the Blade, but Dean hands it to Castiel instead. Dean tells Crowley that he lied to him twice today, Crowley was never on Cain's list and Dean will not give Crowley the Blade. Crowley then disappears, as Dean collapses into Sam's arms and Sam comforts his brother. Crowley returns to his headquarters to find his mother with bags packed. Crowley doesn't want to hear any "I told you so's" from Rowena, but Rowena tells him she is disappointed at what Crowley has become. She was proud that he was the King of Hell, but now he is the Winchester's bitch.

Back at the Bunker, Sam reassures Dean because if Dean can kill Cain without losing himself than there is hope, and Dean halfheartedly agrees. When Cass arrives and confirms that he hid the First Blade somewhere safe, Dean excuses himself, and after he leaves, Cass asks about Dean. A worried Sam responds that Dean is in trouble. 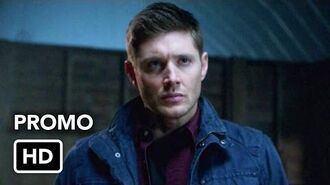