The CW is the TV network that Supernatural airs on. The CW lineup has featured on a mixture of programming that originated on both UPN and The WB along with its own original programs, mostly targeted towards women and young adults.

The season two of Supernatural aired Thursdays, 9:00 pm ET at The CW, and was the first season to air on the CW television network, a joint venture of The WB and UPN. The first season of the show was broadcast on The WB. It averaged only about 3.14 million American viewers, and was in danger of not being renewed. The cast and crew garnered many award nominations, but the episodes received mixed reviews from critics. While both the brotherly chemistry between the lead actors and the decision to finish the main storyline were praised, the formulaic structure of the episodes was criticized. The series was renewed for a third and fourth season. 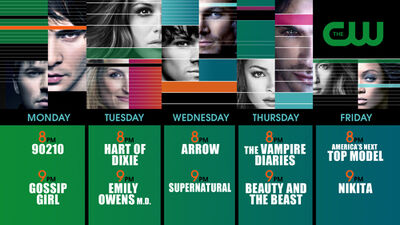 Retrieved from "https://supernatural.fandom.com/wiki/The_CW?oldid=327077"
Community content is available under CC-BY-SA unless otherwise noted.