When multiple patients of grief counselor Mia Vallens (guest star Rukiya Bernard) turn up dead, Sam, Dean and Jack investigate the mystery surrounding the murders and, each inadvertently, are forced to deal with unresolved grief of their own.

In Wisconsin, a man returns home and is greeted by his wife; who he is shocked to see as she is dead. They exchange pleasantries before she kills him by stabbing him in the abdomen.

At the bunker, Sam arrives with coffee and snacks as Dean is investigating the situation in Wisconsin as some are saying break in, a neighbor claims she saw the victim's dead wife. The Winchesters decide to check it out with Sam wanting to take Jack with them as Dean is adamant in refusing but Sam tells him to give the boy a chance. Dean goes on by stating that Sam needs to move on from the pain of losing their mother as Sam calls him out on his cold behavior. He then goes to get Jack who is watching videos and invites him to join in on the recent assignment. Jack refuses and states he knows Sam is trying to get him to use his powers again to open a portal as Sam reveals his reason. He also promises not to allow Dean to hurt him as they go off to their quest.

The trio go to the victim's house where they put on their aliases as FBI and ask the neighbor about what she saw and she explains it was definitely her old neighbor's wife. Dean and Sam begin making deductions on what could of it done it as they decide to visit the dead woman's grave. They burn the body to ensure it's not a zombie and tell a curious Jack they did so for his mother and continue to ponder on what did it.

Meanwhile, in The Empty, Castiel starts calling out for someone to answer where he is. He soon wanders through the Dark realm as a mysterious figure materializes from the ground in a surge of tar-like substance, and follows him.

On Earth, a woman has car trouble and calls for assistance as she turns to see a young boy in her car recognizing him as Scotty who she is happy to see before he kills her. The next day, Dean and Sam are called in and connect the incident with that of the dead wife as they were too similar. The brothers soon see that both victims were seeing a grief counselor named Mia Vallens and thinking she may know something they go check it out.

They pretend to be a trio of brothers who lost their mother. When Dean and Sam have a falling out, Sam steps out as she continues to talk with Dean who is more than less doubtful of therapy. Sam then returns and holds her at gunpoint revealing he discovered Mia is a Shapeshifter as Dean joins him in pointing a gun. Mia states she did not hurt anyone as the brothers tell her that some of her patients have ended up dead which surprises her. Knowing they are hunters, Mia proclaims her innocence and tells them she has an alibi and to check it out to confirm it.

Dean goes to do so and returns confirming she is telling the truth, to her relief. They then ask if she isn't killing anyone who was as she deduces it to be her old lover Buddy who is also a shifter that enjoyed killing just to torment others. However, she is trying to atone for her past by helping people get through their grief. Understanding, the Winchesters state if Buddy is doing so then he must be taking on the forms of her patients to get information and kill them.

In the other realm, Castiel continues wandering until he feels the presence of the being and tells them to come out as the figure does so by taking on his form. The being introduces itself as a "friendly neighborhood Cosmic Entity" who states it took on his form so he wouldn't be afraid. Castiel questions where he is and the entity explains it is The Empty, the place that existed before everything and the place where angels and demons are sent after death where they are put in eternal slumber. Because of that, the entity was able to sleep though he questions why Castiel is awake and states he has awoken it from its slumber. The entity brings this up to him, as he states nobody has ever awoken but Castiel doesn't know and suggested that the Winchesters must have made a deal, but the entity stated that's not the case as only it has power over the Empty with not even God having power there. It soon probes Castiel through his memories in an attempt to find out what could've woken up Castiel as the latter is put in pain.

While Dean and Jack go to a possible lead, Sam goes through her surveillance cameras to see which one of her patients is the shifter due to shifters eyes flaring on camera. He asks about her sessions and how patients react, to which she stated they don't mind as they get out their pain. Sam soon finds the shifter and leaves in Mia's car to pursue them.

In the Empty, the entity explains to Castiel, who remains in pain, what he did and that he wants Castiel back to sleep. Castiel realizes from the entity's description that having him awake is painful for him which the entity confirms, stating that if Castiel can't sleep, it can't sleep. The entity insists that it likes and needs sleep, causing Castiel to suggest that it get rid of him by sending him back to Earth. The entity suggests that it instead throw Castiel so deep into the Empty that he can't bother it anymore, but Castiel recognizes that the entity is bluffing and that it won't work as the entity would've already done it if it would work. The entity acknowledges that Castiel is right, but refuses to send him back, telling Castiel that "it's not part of the deal" and he doesn't want to return. Castiel denies this as his friends need him but The entity states that it has gone through all of Castiel's mind and knows everything there is to know about him and claims that there is nothing back on Earth for Castiel. The entity then shows Castiel visions of his grace being stolen by Metatron, his death at the hands of Lucifer, the Escape of the Leviathans and Castiel returning the souls to Purgatory.

Dean and Jack return while Dean calls Sam, Jack speaks with Mia he tells her that he is not actually Sam and Dean's brother and that his mother actually died when he was born. He shows her the video of his mother asking if she will take on her form for him to gain some closure.

Seeing his pain, she does so and Jack hugs "his mother" getting some of his pain out. "Dean" then talks with Sam and the latter announces he's coming back as his brother states he'll be waiting. "Dean" then notes on "fricking easy" it was to get Sam to come back as it turns out to be the shifter while the real Dean is unconscious on the floor. "Dean" barges in and knocks out Jack before holding Mia at gunpoint and reveals himself to be Buddy.

Buddy handcuffs Dean to the fireplace and props Jack up next to Dean, both of whom are unconscious, while he talks to Mia about the life she left behind. He proclaims his intention of destroying that life by having her kill the hostages but she refuses and tells him to kill her. Dean wakes up to find himself cuffed to the fireplace, then he tries to tell Jack, who has also regained consciousness, to help him and stop Buddy. But Buddy notices that Dean is awake. He tries to have Mia kill Dean with his own gun, but Mia refuses. Then Buddy notices Sam return to the house and points this out to Dean, who is surprised.

Just as he's about to shoot her, Buddy sees Sam return and readies to kill him by tricking him into coming to him. When Sam enters the house, Dean tries to warn Sam to not come, but Buddy knocks him out again. This confuses Sam, who calls out Dean's name. Buddy kneels beside unconscious Dean and tells Sam (in Dean's voice) that they're upstairs. Sam goes upstairs and starts tp open the door. When Sam starts to open the door, Mia tries to stop Buddy but is pushed aside though Jack instinctively uses his power to push Buddy away and cause the bullet to ricochet into the wall. This act saves and allows Sam to shoot Buddy, killing him.

As Castiel is put in pain, The entity beats Castiel while attempting to convince Castiel to return to sleep by deeming him worthless. However, Castiel refuses the entity's demands and declares that no matter what the entity does, he will keep it awake and fight it for eternity if he is not released. The entity angrily denies Castiel's demands as Castiel continues to demand his release from the empty.

On Earth, Mia apologizes for the trouble she has caused and promised to do something about Buddy. She laments that all her attempts to help people were for naught but Jack states she helped him in his time of need. This somewhat relieves her spirits as she smiled at him in thanks.

At the bunker, Dean meets Jack and congratulates him on his actions in the mission as Jack accepts it. Dean goes to talk to Sam and apologizes for his recent behavior and tells Sam to maintain his faith in bringing back their mother, after the latter starts to doubt his thoughts. Dean explains he wants Sam to maintain the faith for both of them as he doesn't believe in anything as of now.

Elsewhere, Castiel awakens in a meadow and realizes that the entity has complied and resurrected him just as he demanded. Castiel then basks in the sunlight, happy at returning to life. 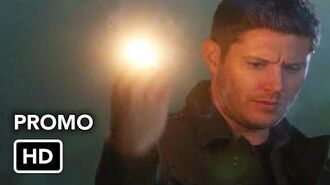