The Supernatural Novels has are a book series that fills in the gaps between episodes and answer questions the TV series did not answer, as well as providing information on the lore of the world of Supernatural.

Sam and Dean travel to Indiana to investigate a murder that could be the work of a werewolf. But they soon discover that werewolves aren't the only things going bump in the night. The town is also home to a pack of jackals who worship the god Anubis: carrion-eating scavengers who hate werewolves. With the help of Garth, the Winchester brothers must stop the werewolf-jackal turf war before it engulfs the town - and before the god Anubis is awakened...

At the stroke of midnight, everyone awake in a Missouri town suddenly falls unconscious in the middle of whatever they were doing. When Sam and Dean investigate, the town seems peaceful. But they soon uncover a wave of strange behavior - streaking, petty vandalism, random violence - and nobody can remember why they did it. With reports of strange shadows and horrible murders, the Winchesters dig deep into the town's secrets and uncover a tragedy fifty years in the making...

When Sam and Dean head to Kentucky to investigate a rash of unexplained disappearances in a town close to Mammoth Cave, they're told local folk tales about the mysterious cave, and the sacrifices it requires to ensure the town's prosperity. Could the disappearances be linked to the ritual, or is another brand of evil at work?

Teenager Renee Mendez is a talented artist living in a small Illinois town. She loves drawing the strange beings that feature in her dreams, without realizing that when she depicts them on paper, they come to life in the real world. These gods begin to seek worshipers and battle for supremacy, killing humans and each other until only the two strongest remain. Sam and Dean come to town to investigate the murders and "miracles" these new gods perform, slaying some of them in the process. The last two gods standing prepare for their final conflict, which only one will survive. The brothers must find a way to stop the gods' war before the entire town is destroyed.

When a gruesome murder takes place in Braden Heights, Indiana, the local authorities suspect the disemboweled and eyeless corpse was the victim of an animal attack. But when another body is discovered, the eyes gouged out, Sam, Dean, and Castiel start looking for connections between the two men and discover both were soon to be fathers. As the boys hunt the killer, they unearth stories from the town's troubled past, and secrets some would prefer to stay buried forever.

Reported sightings of a hellish hound and the discovery of newly desiccated corpses bring Sam and Dean Winchester to Brennan, Ohio. But when they catch the monster canine it turns out to be "Frankenmutt"; a reanimated patchwork of pieces from separate dogs. Soon the brothers are on the trail that leads from mad scientists and biotechnology to a centuries-old alchemist, walking corpses, and an ancient and malevolent power.

A rash of strange deaths in the Tahoe National Forest brings Sam, Dean, and Bobby to the Sierra Nevada mountains to hunt a monster with a taste for human flesh. Soon walking corpses, bodies with missing organs, and attacks by a mysterious flying creature lead the trio to a cunning and deadly foe which can assume a human form and will do anything to survive. When a blizzard strikes the area, and not knowing who they can trust, they must battle not only the monster but also the elements to survive.

Laurel Hill, New Jersey is beginning to look like one of the unluckiest places on Earth when a series of mishaps hit the town. But Sam and Dean suspect it's more than just bad luck. Along with Bobby Singer, the brothers soon realize that a powerful Japanese demon is encouraging the chaos. But the demon has bigger plans and they are going to need to make their own luck to stop it.

Alerted to strange happenings in Clayton Falls, Colorado, Bobby sends the boys to check it out. A speeding car with no driver, a homeless man pursued by a massive Gila monster, a little boy chased by uprooted trees — it all sounds like the stuff of nightmares. The boys fight to survive a series of terrifying night times, realizing that sometimes the nightmares don't go away — even when you're awake...

A truck full of illegal Mexican immigrants slaughtered with supernatural force is found by the side of a road. Trying to find answers, Sam and Dean are plunged into the dangerous world that exists along the Mexican border. They encounter a tattooed, pistol-packing bandit on a motorcycle who seems to be everywhere they go before they get there. Xochi Cazadora draws them into a whole new world of monsters...

Dean believes that Sam is in Hell so he is trying to keep his promise to his brother and live a normal life with Lisa and Ben. When he realizes that a spell in the Necronomicon could raise Lucifer and therefore Sam, he convinces his new family to travel with him on vacation to Salem. Meanwhile, Sam is not as far away as Dean thinks and has his own reasons to hunt the Salem witches. A Supernatural novel that reveals the untold events of the missing year between seasons 5 and 6!

War of the Sons[]

On the hunt for Lucifer, the boys find themselves in a small town in South Dakota where they meet Don - an angel with a proposition... Don sends them a very long way from home, on a mission to uncover the secret Satan never wanted them to find out.

Heart of the Dragon[]

When renegade angel Castiel alerts Sam and Dean to a series of particularly brutal killings in San Francisco's Chinatown, they realize the Heart of the Dragon, an ancient evil of unspeakable power, is back! John Winchester faced the terrifying spirit 20 years ago, and the Campbell family fought it 20 years before that - can the boys succeed where their parents and grandparents failed?

Way back in 1862, Confederate Captain Jubal Beauchamp leads a charge across a Georgia battleground... Fast forward to the present day and a civil war re-enactment on the same site becomes all too real. When Sam and Dean head down South to investigate, they discover that the past really isn't dead...

Sam and Dean are headed for Key West, Florida, home to Hemingway, hurricanes, and a whole lot of demons. The tropical town has so many ghouls on the loose that one of its main moneymakers has long been a series of ghost tours. But the tours are no more, not since one of the guides was found dead of an apparent heart attack . . . his face frozen in mid-scream. No one knows what horrors he saw, but the Winchester brothers are about to find out.

Soon they'll be face-to-face with the ghosts of the island's most infamous residents, demons with a hidden agenda, and a mysterious ancient power looking for revenge. It's up to Sam and Dean to save the citizens of Key West . . . before the beautiful island is reduced to nothing more than a pile of bones.

Sam and Dean have set out on a road trip to the Grand Canyon, but this is no vacation for the brothers. On a stretch of deserted ranchland just beyond the canyon's stunning vistas, mysterious murder sprees have occurred every forty years. The area's inhabitants have been few and far between in years past, but a nearby mega-mall is about to celebrate its grand opening—and attract thousands of fresh victims.

The Winchester boys are determined to protect locals and shoppers alike, but they never anticipated they'd be fighting a group of killers this vicious, this vindictive, this . . . dead. A deadly horde of animal spirits and human ghosts has arisen to terrorize this tiny corner of the Arizona desert. If Sam and Dean can't figure out why, the wide-open spaces of the West will once again become a desolate frontier . . . and the witch's canyon will be the brothers' final resting place.

Sam and Dean have hit New York City to check out a local rocker's haunted house. But before they can figure out why a lovesick banshee in an '80s heavy-metal T-shirt is wailing in the bedroom, a far more macabre crime catches their attention. Not far from the house, it's the latest in a line of killings that the brothers soon suspect are based on the creepy stories of legendary writer Edgar Allan Poe.

Their investigation leads them to the center of one of Poe's horror classics, face-to-face with their most terrifying foe yet. And if Sam and Dean don't rewrite the ending of this chilling tale, a grisly serial killer will end their lives forevermore.

Supernatural: The Men of Letters Bestiary: Winchester Family Edition is a resource novel that talks about many of the creatures that Sam and Dean have faced, their backgrounds, and how to defeat them.

The Mythology of Supernatural[]

The Mythology of Supernatural is a guidebook to the world of Supernatural, including info on creatures like angels and demons, as well exorcisms and the apocalypse itself.

Bobby Singer's Guide to Hunting is a prequel book of sorts as well as a resource book. Mostly tells about Bobby's adventures and his relationships with other characters.

Supernatural: John Winchester's Journal is a prequel and resource guide to the TV Series detailing the Winchester's past as well as their hunts.

The Supernatural Book of Monsters, Spirits, Demons, and Ghouls[]

The Supernatural Book of Monsters, Spirits, Demons, and Ghouls is a resource guide featuring several of the creatures Sam and Dean has fought as well as parts of John Winchester's Journal.

Supernatural, the Television Series: The Roads Not Taken[]

Supernatural, the Television Series: The Roads Not Taken is an interactive novel that lets readers control their action as they follow Sam and Dean Winchester on their adventures of hunting demons and all other things supernatural. 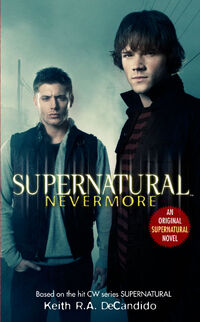 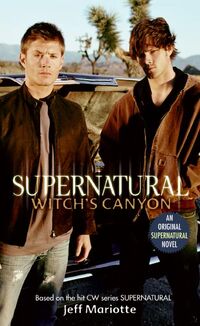 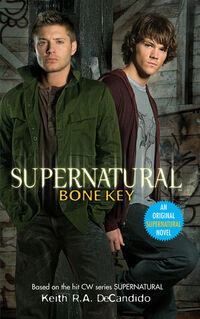 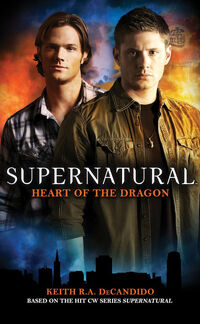 Heart Of The Dragon book cover 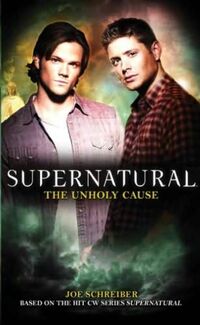 The Unholy Cause book cover 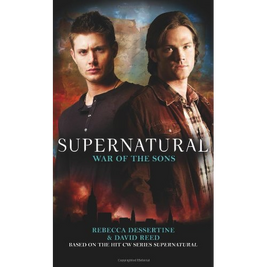 War of the Sons book cover 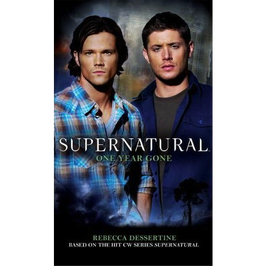 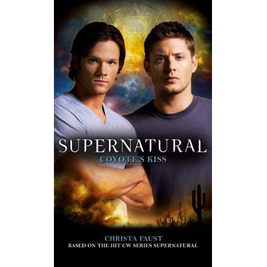 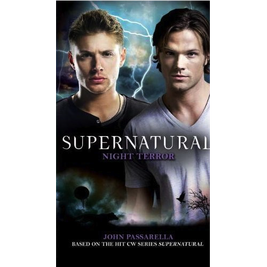 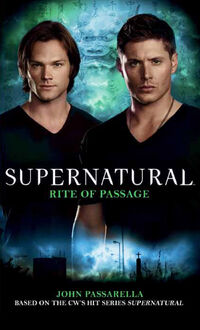 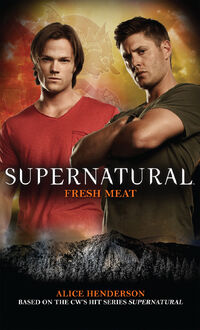 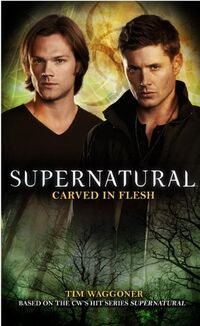 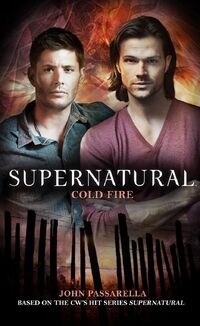 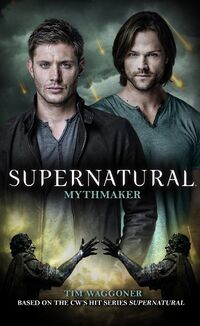 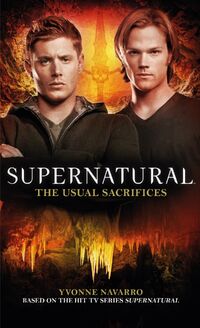 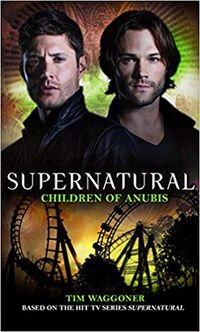 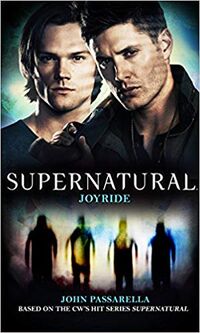 All images and summaries taken from Amazon.com