In Men of Letters bunker

The Spear of Destiny is an artifact stored in the headquarters of the Men of Letters. It was one of the artifacts Dean Winchester found in the order's cache. The attributes or purpose of the blade, if any, is yet to be revealed 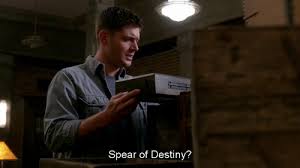 Retrieved from "https://supernatural.fandom.com/wiki/Spear_of_Destiny?oldid=384422"
Community content is available under CC-BY-SA unless otherwise noted.