Sam continues his efforts to save Dean from the Mark of Cain. Crowley realizes Dean's demonic antics are starting to cause problems for him in Hell so he searches out an unlikely ally – Castiel.

The episode starts with Sam, posing as a doctor, getting a Father to show him how to recite a purification so that he can perform it on donated blood. He then steals bags of donated blood and brings it back to the Men of Letters bunker where Dean is tied to a chair inside of a devil's trap carved into the ground of their dungeon.

Dean sees the blood and tells Sam that he doesn't want to be cured, and questions why Sam is bothering to do this, and whether it'll work, reminding his brother that the Mark of Cain makes his case different than Crowley's or any other demon's curing. When he tells his brother he doesn't like shots, Sam responds with "I hate demons," and goes to inject him with the blood. Dean reacts by flashing his black eyes and growling at Sam, who splashes holy water on him and jabbing the needle into Dean's forearm right near the Mark of Cain. The blood causes Dean severe pain, and he groans loudly and hoarsely, like an animal.

Castiel and Hannah are driving to the Men of Letters bunker to help Sam with curing Dean. Hannah shows her concern for Castiel's well-being. She is frustrated that they have to drive to the bunker in Cass's condition, but Cass isn't worried about himself, and knows that Sam needs help, reminding her that if the cure doesn't work then Dean is gone, and that they need to deal with the demon inside him.

Sam injects Dean with another dose, which Dean reacts to painfully. Dean suggests that what Sam is doing might actually be killing him, rather than curing him. Sam reminds him that there isn't a known exception to the cure, and Dean responds by insulting hunting and the lore. Then Dean tells his brother that there isn't much difference between what he became and what Sam already is, expressing that he knows exactly what Sam did while he was looking for Dean, asking which of them is the true monster.

Flashback to Sam sitting in a bar talking to Lester, Dean's latest victim. Lester explains that he wishes he could get revenge on his wife for cheating and kicking him out. Sam offers to show him how he can get his revenge by having him summon a Crossroads Demon. Sam hides behind the bushes when the demon appears, but isn't able to get her in time to stop Lester from making a deal. Even though he captures the demon, he still used Lester to get info on Dean and Crowley, and it cost Lester his life and his soul. Sam is shown torturing the demon for info, even cutting her up with a knife, but she claims that Dean and Crowley are off the radar.

Dean coldly reminds Sam of the line they used to have that was between them and what they hunted, and that Sam may have crossed that line. That Sam might actually be worse than Dean. Sam responds by injecting the needle into Dean's neck. Dean then reminds him that if the cure doesn't work, he might have to kill his brother, much to his dismay.

Crowley is shown in his lair punishing demons. One demon comes in and tells him how weak Castiel is because of his fading grace, and that they should take the obvious advantage and kill him. Crowley has Castiel being followed. He then reminisces on his and Dean's time together. When another demon offers to fill in the role that Dean used to have with Crowley, being his 'party and slutting' wingman, Crowley merely snaps his fingers and instantly explodes him - puff - into a swirly cloud of ash.

Castiel and Hannah are on the side of the road, trying to read a map. Hannah can tell that Cass is getting worse, and wants him to steal another angel's grace to better himself, but Cass still refuses. He suggests that she carry on without him when he dies. Sam calls Cass telling him that the cure isn't working very well. Explaining that he might be killing his brother rather than saving him. Cass reminds him that Dean isn't his brother right now, and that he may very well have to kill him.

When Sam walks back into the dungeon Dean is unconscious. Sam slaps him and shakes him until he wakes up. Dean tells him that there's no point in trying to bring him back as he's preferring being a demon. He throws a few harsh words at Sam, including that he tried hard to get away from Sam, and that their mother would still be alive if it wasn't for Sam, that Sam never really had a brother, and that he quits being in their dysfunctional family. He even insults their father when Sam pulls out another needle, saying that he is pulling Dean's "lame ass out of the fire", and injects him again, then walks away. Dean groans and wheezes in pain.

Crowley is shown in his lair punishing more disloyal demons when one approaches him, questioning Crowley's ruling of Hell and how he treats his demons, reminding him that he is unable to control Demon Dean. The demon then proceeds to soak himself in holy oil, burning himself alive.

Castiel and Hannah stop at a gas station, where Hannah finds a man who was obviously killed by an angel. Cass comes in and finds the angel Adina holding an angel blade to Hannah's throat. Hannah helplessly watches as Adina throws Castiel out a glass door and begins to beat him mercilessly.

Sam goes into Dean's room, looking around at his belongings. Then he finds a few old family pictures of him and Dean, their parents, and even with them and Bobby. He smiles happily at these pictures. When he walks back downstairs to the dungeon, he finds the chair where Dean was tied up to is now empty.

Back at the gas station, Adina is torturing Hannah when Crowley shows up, cuts her throat, steals her grace, and then stabs her with an angel blade, killing her. Crowley takes the grace in a vial and walks outside to Castiel.

It's now a game of Cat and Mouse with Dean hunting for Sam in the halls of the bunker. He looks behind several doors, while Sam finds a set of keys and heads towards the main power room. Dean yells out to Sam, taunting him.

Crowley holds Castiel and tries to get him to take the stolen grace. At first he refuses, but Crowley reminds him that Cass isn't the one who killed her, so his hands are clean. Crowley opens the vial, lets the grace flow into Cass's mouth and a beam of light shines from Cass as the grace restores him back to power. Crowley explains that he only helped Cass because Dean has been causing trouble for him in Hell, and Crowley wants to make sure that Cass helps Sam cure Dean. Cass reminds him that if it doesn't go right then that means they have to kill Dean. But Crowley shows no sign of caring about that.

Sam then turns on the alarms in the bunker, thus locking the building down while Dean is still looking for him. Dean shouts that's just fine as he doesn't want to leave until he finds his brother anyway, then tells Sam that his trying to cure him with purified blood is what enabled him to escape. The less demon he was "the less the cuffs worked", and consequently was able to merely walk across the Devil's Trap. Then he realizes that Sam has the set of keys to the power room. Dean goes to look for him there while Sam hides, waiting. Dean then shuts off the alarm. Sam, in a hallway nearby, runs over to the door and locks Dean in there. He tells Dean to let him finish the treatment, but Dean then proceeds to break the door down with a hammer he was carrying with him. He continues to taunt Sam, reminding him that he still has enough "demon" left in him to not hesitate killing Sam, and Sam says he will kill him if he comes out of the room, even though he doesn't want to. But Dean knows Sam won't do it, and continues to break the door down until Sam runs down the hall. Dean finally breaks his way through the door and looks for Sam.

When Sam looks around a corner, there's nothing there. He turns back around and Dean swings the hammer at his head. Sam quickly ducks and holds Ruby's knife to Dean's throat, but doesn't do anything. Dean continues to egg him on to do it, but Sam takes the knife away from Dean's throat. Dean smiles, flashes his black eyes and advances on Sam when Castiel comes up behind him, grabs him around his arms and holds him still. Then his eyes flash blue as he uses his angel powers to hold Dean back. Dean growls and yells in defeat, Cass telling him "it's over".

Sam injects one last syringe into Dean's arm while he sits there unconscious. He and Cass stand in front of Dean, waiting for something to happen. Sam tells Castiel that even after all the injections Dean still didn't want to be turned back into a human. Cass explains that only humans can feel real joy and pain, and that being a demon is easier. Not having to feel all the emotions of a human.

Dean begins to stir awake. Sam and Cass ready themselves, Castiel holding up an angel blade, and Sam carrying the flask of holy water. Dean wakes up, his eyes still black. But as Sam and Castiel watch, the black from Dean's eyes begins to wash away and we see his bright green eyes. They stand there waiting for him to do something. Dean, acting a little out of it, calmly says, "You look worried, fellas." Sam splashes some holy water on him again, and nothing happens. They now know that he has been cured. Sam and Cass smile in relief, while Dean looks at them still a little confused, but still clearly having remembered everything that happened.

Sam finds Castiel in another room and tells him he's going to get Dean some food since he is hungry again. But the curing ritual made him a little weak, and a little out of it. Castiel reminds him that even though the demon in Dean is gone, the Mark of Cain is still there, and will eventually pose a problem for them. But Sam wants to put it off and just get Dean some food, and then get himself drunk.

Dean is looking through the same pictures Sam was looking at earlier in his bedroom. Castiel comes in and tells him he looks terrible. Dean notices that Cass looks better, and Castiel explains that he has another angel's grace, and that his powers are back temporarily. Dean thinks that Sam will leave him after everything that happened, but Castiel reassures him that the things he did weren't the real him, and that after all they've been through together Sam won't leave easily. Dean tells him he's glad that he's back. Castiel then tells him that he should take some time to heal from the cure before leaving Dean's room.

In Tulsa, Oklahoma at some hotel is a woman sitting in front of a fire, reading a book. Blood drips on her arm from one of two men she has pinned to the ceiling above her, dead. The red-headed woman, Rowena, smiles proudly. 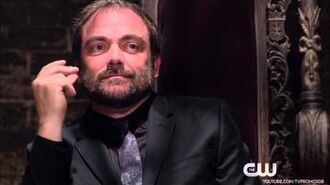 Retrieved from "https://supernatural.fandom.com/wiki/Soul_Survivor?oldid=412932"
Community content is available under CC-BY-SA unless otherwise noted.