Smiting is a powerful ability where a being kills another being by touching them.

Angels can inherently smite most demons and monsters (except Leviathan and Eve) as well as humans. Archangels and Seraphim can smite demons effortlessly and kill them instantly. When it comes to regular angels, it takes more concentration and if they are too physically or mentally weak, it will not work and they will only be able to smite black-eyed demons but not high-tier ones, such as Alastair. It is implied that an angel cannot smite a demon out side of a vessel, as Castiel pushed a demon back into its host, while trying to escape, before smiting it. If a demon or human has been smote, the vessel's eyes light up with a white holy light, burning the eyes and killing the demon. Apparently, Angels can control how powerful their smite is, and can choose if it will kill them, or simply burn out their eyes. The angels of Heaven can also unite their power to generate an immense beam of light in order to smite a target without physical contact.

Another form of this smiting is displayed by Sam Winchester multiple times, most notably on Lilith and Alastair, only after drinking much demon blood. This demonic version seems to make the demon glow with yellow light that illuminates the skeleton - similar to the Colt and the demon-killing knife - then the demon and vessel die.

Sam Winchester was able to smite a high-level demon, Alastair, by using his mind after he drank a lot of demon blood.

The demon Cain displayed a similar power except the light was red instead of white.

Beings with this ability 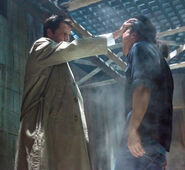 Castiel, empowered by the souls of Purgatory, using implosive smiting on Raphael
Add a photo to this gallery
Retrieved from "https://supernatural.fandom.com/wiki/Smiting?oldid=192845"
Community content is available under CC-BY-SA unless otherwise noted.