Do You Believe In Miracles?

The CW announced the renewal of Supernatural for a ninth season on February 11, 2013. Actor Misha Collins was announced to be returning as a series regular and also directed an episode. He is the second star of the show to direct an episode. Actor Jim Beaver was also announced to be returning this season. Jensen Ackles did not direct an episode of his own, as he did in Season 6, 7 and 8 due to the birth of his daughter. At Comic Con, Jensen stated that “I’m not directing this year — well not yet. They haven’t given me one. I usually direct the first one out of the gate, but because I have a 7-week-old daughter I opted to stay home with the newborn instead this year. There’s still a few episodes that are not slated yet with the directors and I think they’re trying to figure out how they can slide me in there storyline wise.”

Supernatural switched from Wednesday to Tuesday nights for the new season. Following the trend of the past two seasons, this season also had 23 episodes. This season premiered October 8, 2013. [1]

Immediately after the fall of the angels caused by the angel Metatron, the Scribe of God, Sam falls into a coma from the effects of the trials to close the gates of Hell and almost dies. With Castiel unable to help (having lost his grace), Dean seeks the aid of another angel named Ezekiel, whose only option to save Sam from his wounds is to possess him. Dean accepts, and helps Ezekiel trick Sam into giving his consent against his knowledge. The three of them, with Kevin (and Crowley as their prisoner), work to find a means to put the angels back in Heaven and are also forced to deal with Knight of Hell, Abaddon, who is attempting to seize control of Hell in Crowley's absence and enforce her reign of Hell on earth. Also a newly human Castiel must continue to run from the thousands of angels who blame him for their setbacks including many of whom are now lead by Bartholomew and Malachi seeking to restore themselves back to Heaven under their respective leadership's. Sam and Dean (with the help of Ezekiel) deal with regular hunting cases with help from old friends such as Charlie and Jody, but over time Sam begins to notice that something isn't right with him which Dean wants to tell Sam about but Ezekiel insists that his presence must remain secret. Eventually, Metatron returns to Earth and Ezekiel is revealed to actually be the angel Gadreel, the former protector of the Garden of Eden picked by God to protect the Garden but failed by letting Lucifer into the Garden and was then punished by being locked away in Heaven's darkest dungeon. Metatron makes a deal with Gadreel to rebuild Heaven together by allowing certain angels to return which Gadreel, seeking to redeem himself accepts. Dean discovers Gadreel's deception and tries to warn Sam, but Gadreel takes full control and kills Kevin. Meanwhile, Castiel reclaims his powers by stealing the grace of another angel. Dean and Castiel team up with Crowley to expel Gadreel from Sam's body, but are forced to let the King of Hell go in exchange for his help.

Sam is furious at Dean's deception, and their relationship becomes strained as they struggle to deal with Kevin's death. While Sam is still at the Bunker and Castiel starts a mission to find Metatron on his own and stay clear of Bartholomew, who eventually finds him and tries to convince Castiel to join him, Dean then teams up with Crowley in his hunt for Abaddon to find the only weapons that can kill a Knight of Hell, the First Blade and the Mark of Cain. Both of which Dean acquires from Cain himself, the first born son of Adam and Eve, who killed his brother Abel and became the original Knight of Hell as well as the trainer and creator of the rest of the Knights, including Abaddon. Sam helps Castiel look for Gadreel, while Castiel comes face to face with Bartholomew who wants him to join his faction of followers hunting for Metatron. Castiel disagrees with Bartholomew's ruthless methods and kills him in self-defense, causing a number of angels to ask Castiel to lead them (much to his chagrin). Dean eventually finds Abaddon and kills her, but the Mark of Cain begins to affect him, bestowing him with great strength, but also a painful desire to kill. Meanwhile, Metatron continues to play God with the power of the angel tablet and starts enacting public miracles to become a deity to mankind and they begin to slaughter and praise in Metatron's name. Gadreel grows tired of Metatron's lies and defects, teaming up with Castiel to try and stop him.

In the season finale, Sam and Castiel worry about the Mark's influence on Dean, but eventually realize that he's their best shot at defeating Metatron. Castiel and Gadreel try to infiltrate Heaven to destroy the angel tablet and cut off Metatron's power, allowing Dean to kill the angel, but they are caught and put in Heaven's dungeon. Gadreel is forced to sacrifice himself as part of a spell to free Castiel. Meanwhile, Sam arrives too late to stop Metatron from stabbing Dean through the heart and his brother dies in his arms. Castiel manages to trick Metatron and take back Heaven, but chooses to spare his life and locks him in Heaven's dungeon though is dying from his draining grace. Sam tries to summon Crowley to fix Dean, but instead Crowley shows up in the bunker of his own choice where Dean's body has been placed and puts the First Blade back into his hands, which revives Dean as a demon.

One of this season's late episodes (reportedly #20) was set to serve as a backdoor pilot for a spin-off of the show. The show planned to explore the clashing hunter and monster cultures in Chicago with all new characters. Unlike "Supernatural," the spin-off would only be set in Chicago.

In the Chicago-set episode, Carver said we’ll be introduced to a show that would, if picked up by the network, “explore the clashing monster and human characters” living in the city. In fact, he said, “we’ll have main characters who are both human and monsters.” That will include, added Singer, “families of monsters and families of hunters.” “It’s much more of an ensemble than Supernatural ,” Singer said. 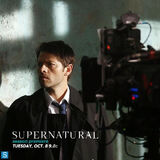 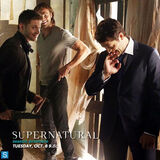 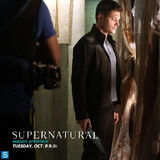 Retrieved from "https://supernatural.fandom.com/wiki/Season_9?oldid=242421"
Community content is available under CC-BY-SA unless otherwise noted.