Edit
watch 01:07
Supernatural: ScoobyNatural Extended Trailer
Do you like this video?
Play Sound

A Most Holy Man

Sam, Dean and Castiel are transported into the animated world of Scooby Doo where they join forces with the Scooby Gang to solve a ghostly mystery.

Dean and Sam fight a spirit possessing a giant, stuffed dinosaur, in a pawn shop and destroy the toy with Holy Oil. As the store owner, Alan, thanks them, Jay, the local Real Estate Developer comes in to investigate, but Sam and Dean make an excuse for the mess created in the fight. As thanks, Alan allows Sam and Dean to have something free from the store, and they take the big screen television.

After hooking up the monitor, the screen glows purple and the brothers are sucked into the television, now as 2-dimensional cartoons. They find Baby in the cartoon world and drive it to the local hangout, the Malt Shop, and find the Mystery Machine, concluding they were in a Scooby Doo cartoon. Dean, fawning over his childhood heroes (including Daphne, who he has a crush on), greets them and they allow him and Sam to join them in their adventure, which Dean recalls the episode and they decide to play it out.

However, unlike in the original run, they discover that one of the victims, Cousin Simple, was murdered when they discovered his dead body. Despite the brutal circumstance, the Scooby Gang treat it like a normal mystery. Castiel, having been sucked into the television as well, joins them on their case to figure out the mystery. Discovering the television displayed purple sparks, like the stuffed dinosaur, the Winchesters realize the two must be connected to the pawn shop. While exploring the hallways, they are attacked by the Phantom, after it brutally murdered Cosgood Creeps (the real culprit of the episode), and the Winchesters realize the Phantom is a real ghost that they would normally investigate.

The group splits up to investigate. Sam tries to tell Velma that the supernatural is real, but she denies it, firmly believing all ghosts and monsters are just people. Dean continues to flirt with Daphne, but she continues to remain ignorant of his flirtations. He soon finds a book in the library (that is drawn instead of painted to the background) that triggers a trap door, that they fall into before fleeing from the ghost. The ghost then attacks Castiel, Shaggy and Scooby, and everyone is chased around the house by the ghost.

They all meet up, and the Phantom attacks them, with Fred getting injured, and Shaggy getting thrown out through the balcony door. Sam and Dean drive off the Phantom, using iron candlesticks and find Shaggy holding on for his life. Scooby jumps to save Shaggy and Castiel jumps and slows their descent to the ground with the help of his coat, but Shaggy's arm gets broken. With Shaggy's injury and the unexplainable abilities displayed by the Phantom, the Scooby Gang is confused by the unusual circumstances. Sam and Dean decide to tell them that all the paranormal stuff is real, including the ghost. The Gang begins to have a nervous break down by this revelation, but Dean encourages them and gets Fred to set a trap for the Phantom.

After the initial trap fails, they lure the ghost to the library and have it fall through the trap door, where it lands in the basement, in a circle of salt, trapping it. Sam, Dean and Castiel interrogate it alone and the Phantom reveals itself to be the ghost of a little boy. The ghost tells them his soul was tied to a pocket knife, found by Jay, and Jay placed the knife in items, like the stuffed dinosaur and the television, to cause the ghost to haunt and attack people against his will. They make a deal that if the ghost releases them back to the real world, they would put him to rest.

Before they leave, the three find the Scooby Gang suffering a second nervous breakdown. To set their minds at ease, the ghost disguises itself as Cosgood Creeps in the Phantom costume, making the cartoon heroes believe the whole thing was just another staged set up by a normal human.

The child returns Castiel and the Winchesters to the real world, and they destroy the knife in the television, putting the kid to rest. Afterwards, they go back to the pawn shop, finding Alan about to sign his store over to Jay, and confront the Real Estate Developer of his crimes, knowing he used the ghost to drive off owners to buy their property and then on Sam and Dean when they got to close to discover his plan. While they knew he would never be arrested for those actions, they hacked his finances and had him arrested for tax evasion.

As Jay is arrested, he uses the meddling kids quote from Scooby Doo and Dean uses Scooby's phrase but Sam and Cass tell him to cut it out. 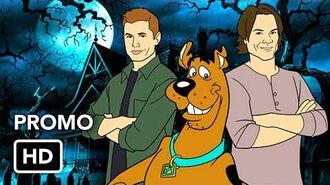 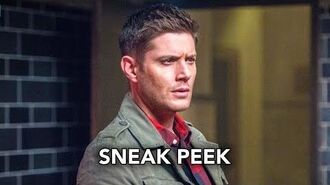 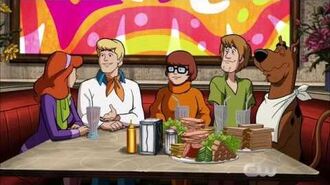 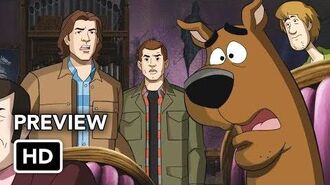 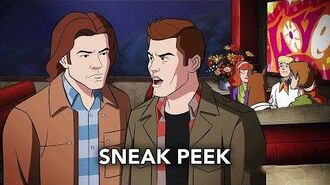