Sam and Dean battle a pair of werewolves who have captured two victims. Just as the brothers are about to win, one of the werewolves shoots Sam. Dean gets his brother and the victims out of the house but learns a pack of werewolves are hot on their tail, hoping to kill them all.

After hitting a dead end on the Darkness and Lucifer situations, Sam finds a possible case of missing hikers at the Wallowa-Whitman National Forest in Grangeville, Idaho. Dean doesn't think it's their type of case until Sam mentions a body being found missing its heart. Dean tells Sam to call another hunter and put them on the case, but Sam insists they should do it themselves to clear their heads, and so they travel to the national park to investigate the case of the missing Tilghmans and another couple. When seemingly at a dead end, the local bar keeper Rose tells them about some old cabins where the lost people may be. Sam and Dean find Corbin and Michelle Tilghman, captured and strung up in one of the cabins. The boys fight and kill their werewolf captors. During the fight, Sam is shot by a werewolf. Dean attends to him by removing the bullet and having Sam put pressure on the wound. When Dean attempts to leave the Tilghmans with Sam while he goes for help, Corbin tells him there are more werewolves and the four decide to take their chances in the forest. After they've left the cabin, Rose and her companion arrive. Rose shows disappointment at the pack members who died, as she had given them ample time to prepare for the Winchesters' arrival. She tells the other werewolf that they have been burned and need to clean up the mess and get out of town.

In the woods, the four soon come across a ranger station. While Dean wants to make sure Sam is okay, Corbin insists they keep moving as Michelle is sick and Sam is slowing them down. Dean gets in Corbin's face, but before things can escalate Sam tells Dean to worry about the Tilghmans and come back for him when they are safe. When Dean leaves to gather wood to build a stretcher for Sam so he can get everyone to safety, Corbin takes it upon himself to smother Sam, as he and Michelle will not make it without Dean's help and Dean will not leave Sam behind. As he places his hand over Sam's mouth, Sam notices a bite mark on Corbin's arm, and begins to fight back harder, but is too weak and appears to die. As Dean mourns over Sam, a truck's headlights flash through the windows. While Dean wants to stay and fight the werewolves, Corbin begs for his help, and Dean agrees to take them to safety, making a promise to Sam that he will return.

The trio reach the road and flag down Sheriff Ben Anderson, who takes them to the Urgent Care Center. While giving a statement, Corbin attempts to downplay Michelle's true version of events, with the werewolves. While he is comforting his wife, Dr. Kessler says that she wishes to check him over. Corbin attempts to refuse but Dr. Kessler insists. As she begins her examination, she notices him trying to cover his arm and discovers a nasty bite mark. As she is cleaning the wound, she asks him how he feels and he replies that he feels "good." Later, while checking on his wounds, Corbin notices the bite mark has disappeared and watches the scratch across his chest instantly heal. His eyes suddenly go wolf-like and long claws begin to sprout from his fingers.

Michelle visits a grief-stricken Dean, and as she muses that "death is not the end," Dean decides to try and contact a reaper. With Michelle's help, he takes an overdose of barbiturates, asking her to call a doctor if he dies. When he does, she gets Dr. Kessler, who starts working to revive Dean. Billie the reaper arrives for Dean and tells him that, as she promised, this time she will cast him into the Empty. He begs her not to take Sam, but she informs him that Sam is not dead. Meanwhile, Sam has regained consciousness just as Rose's companion enters the cabin. The man is able to sniff out Sam, who is hiding in the basement. As he goes downstairs and searches for Sam, Sam is able to get the drop on him and stab him in the heart. When Rose enters, she hears a loud crash and goes to investigate. Once she reaches the bottom of the stairs, she is quickly killed by Sam.

After Dr. Kessler resuscitates Dean, and he returns to his body, Sheriff Anderson places Dean under arrest for the theft and consumption of the drugs, as well as for assaulting him earlier. When he demands Dr. Kessler sedate Dean, she refuses, telling him that it could be fatal. Frustrated, Sheriff Anderson tells her to keep an eye on Dean while he calls for backup. Unbeknownst to either Sheriff Anderson or Dr. Kessler, Michelle frees Dean of his restraints. As he is leaving the Urgent Care Center, he gets a call from Sam. Dean tells him where he is at and to get to him as fast as possible. In the hospital, Dr. Kessler hears screams coming from a nearby room; she knocks and asks if everyone is okay. Corbin opens the door, fully transformed into a werewolf, and tells Dr. Kessler "I really am" before attacking and killing her. Hearing Dr. Kessler's scream, Michelle and Sheriff Anderson rush to her. As Michelle checks on Dr. Kessler's prone body, Sheriff Anderson is impaled by Corbin's arm. Corbin then attempts to calm a panicked Michelle, telling her he didn't want this, but she will see how it feels and they can be together forever. Before he can get close to her, Corbin is jumped by Dean. As Corbin gets the upper hand and begins choking Dean, he is suddenly shot in the heart with a silver bullet by Sam, killing him.

While Sam is receiving care, Dean and Michelle talk; Dean attempts to console her and tell her things will eventually get back to normal. Michelle muses that after seeing the man she loved die, nothing can be the same. Some time later Sam is discharged from the hospital. As they are about to leave, Sam asks Dean what he did when he thought he was dead. Dean at first jokes, but Sam asks for a real answer. Dean simply tells him he knew Sam wasn't dead before the two finally drive off. 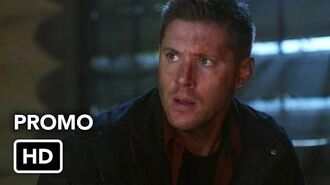