Sam, Dean and Castiel call on Rowena (guest star Ruth Connell) to help keep the evil souls at bay and get an unexpected assist from Ketch (guest star David Haydn-Jones).

A woman - Nan - has left the high school where the Harlan townsfolk are taking refuge from what they have been told is a benzene leak to get her daughter's allergy medicine. She meets another resident, Rob, who is just standing in the street and as she nervously starts talking to him, he stabs her repeatedly in the stomach. Rob falls to the ground while an older man's ghost, dressed in 19th century clothes, leaves his body.

At the high school, people are starting to question the benzene leak explanation and word has spread that at least one person has gone missing. Hunters are on patrol in the town and Sam alerts them to keep an eye open for Nan. He then addresses the evacuated people, telling them that they can return to their homes soon, but that everyone needs to stay out of the quarantine zone for safety reasons.

Dean and Belphegor are patrolling the quarantine area. Belphegor tells Dean that the warding won't last forever and that the ghosts from Hell are much more dangerous than usual ghosts. He notes that a ghost that Dean had just shot with rock salt is Francis Tumblety, better known as Jack the Ripper.

The next morning, the mood becomes more tense in the high school since there is no new information about the leak, and some of the townspeople sneak out to try and find Nan. Meanwhile, in a house in the residential area, some ghosts gather to discuss the situation. The ghost of Francis Tumblety shares the latest information with the crowd and tells everyone that God Himself opened Hell's doors and that they are being held captive by hunters with the demon Belphegor's help. He suggests they assemble all the other ghosts hiding in the area and that sooner or later, they will find a way out. Until then, they want to attack every human they can find.

In the high school, Castiel urges Sam to tell the townsfolk the truth about last night's murder, but Sam's afraid people will panic. Before he can explain his point any further, Rowena arrives. Sam asks if she remembers the soul bomb she created to attack the Darkness a few years back and says he wants that crystal to catch those ghosts, since ghosts are nothing else but souls. Rowena says that it was very hard for her back then to make it and she's unsure if she can do it again. Jules interrupts to tell Sam that they have a problem. Sam meets up with Dean and Belpheghor in the residential area. They find the two people who sneaked out earlier in search of the missing woman. Sam tells them that they need to go back when suddenly ectoplasm begins running down their faces. Francis Tumblety appears and demands the release of all the ghosts. When neither Sam nor Dean react, the spirits possessing the humans starts ripping them apart from the inside. Out of the blue, Arthur Ketch comes down the road, shooting the two people with iron flakes so that the ghosts are forced to leave. Ketch says he was nearby and wants to support the Winchesters.

Back in the evacuation camp, Sam and Dean update Ketch on their plan to catch the souls with a magic crystal made by Rowena. Ketch apologizes to Rowena for when she was held prisoner by the British Men of Letters, where Ketch tortured her but also helped her to escape. Rowena say she has not forgotten. Belphegor enters the room and says that it's all quiet; therefore he assumes the ghosts are up to something. He introduces himself to Ketch, who then tells everyone that he got an assignment from a female demon called Ardat to eliminate Belphegor. Seeing that the demon is not a threat at the moment, Ketch puts this task aside.

In Reno, Amara is enjoying a massage when Chuck turns up, casually smiting her masseuse so He can surprise her. He says He wants to check on her, since they are family, but Amara is skeptical about His sudden visit.

Rowena hands a list to Dean with all the ingredients she needs for her crystal. Dean goes back into the high school office, where Castiel tries to talk to him, telling Dean he's still sorry for what happened with Mary, but Dean just glares at Castiel and tersely tells him "Don't." Dean admits that he's not only angry about Castiel's lack of honesty about Jack, but about the whole situation -- being played by Chuck his whole life. He thinks that none of their choices and nothing about their existence was truly real. Castiel disagrees, saying one thing is real -- they are.

Dean goes on patrol with Ketch and explains that they are up against Chuck. Since God's existence was more theoretical to the British Men of Letters, Ketch says there is no weapon against Him so far. Dean receives a message that two hunters haven't checked in and are now missing. They look for them in an old factory but are attacked by another ghost until Kevin Tran saves them. Dean is shocked to find out that he was in Hell, when Chuck told them he'd be going to Heaven. Kevin reveals that he was sent to Hell by Chuck -- which did give him a "bad boy" reputation, making the other damned souls fear and respect him. Kevin says he can feel the warding fading, and if he can then other ghosts can as well.

Chuck keeps talking to an annoyed Amara about teaming up again as she does yoga, and about leaving the planet and creating a new species. Amara realizes that something's wrong with Chuck, that He is scared and not at full power. He's depending on her support to get away, which amuses her.

In the morning, Sam and Dean are walking the quarantine area again, talking about Kevin's support. They know it might be dangerous for him to team up with them. To their annoyance, Belphegor sneaks up. Sam and Dean want him to do the warding spell again to gain more time, but he says that this is impossible. When hearing about Kevin and the Winchesters' plan to send his soul back to Heaven, the demon explains that no soul from Hell can be sent to Heaven. When the brothers mention their father and Bobby Singer as examples of souls that went from Hell to Heaven, Belphegor says they were exceptions that Chuck made because He used to like Sam and Dean.

In Reno, Chuck is alone in the room, checking His shoulder in a mirror. He carefully touches His wound, which is still painful. In the same moment, Sam feels a sharp pain in his shoulder, but tells a worried Dean he's okay. Meanwhile, the ghosts gather together again. They feel that the warding has become weaker. Francis wants them to find the weakest spot and break through it with their combined power. One ghost reminds them that the hunters know the situation as well, and are working on a plan to stop them. Kevin appears, but since everyone knows about his connection with the Winchesters now, they don't fear him anymore.

Rowena works on her crystal while flirting with Ketch, who helps her speed up her progress with some science. They keep flirting until her phone rings. Dean urges her to finish her work quickly.

As Rowena enters the neighborhood to meet with Sam and Dean, she encounters Tumblety, whom she had a brief liaison with centuries ago in England. He wants her to deliver a message to the Winchesters -- they have Kevin and want to talk. Ketch appears and shoots him with his gun. Rowena runs away but Ketch is knocked out by Tumblety from behind. When Rowena arrives, she tells them about Ketch and that she's not sure if her crystal works.

Sam and Dean meet with the ghosts in a house. Tumblety wants them to take down the warding or he will devour Kevin. When they refuse his demand, Tumblety sticks his hand into Kevin and begins absorbing him. Rowena and Castiel soon enter from the other side and she catches a few spirits with her crystal while others escape.

Outside of the warding and at its weakest spot, Sam, Dean, Belphegor, Castiel, Rowena, and Kevin watch the ghosts attempting to escape. The demon says that there are about a hundred spirits already and that more are coming as Ketch joins them. Rowena proceeds with her crystal, catching a large number of souls, but she gets knocked out by Ketch, who is possessed by Tumblety. He wants to use the crystal with all the souls to destroy the warding, but is shot by Dean. Rowena takes the crystal again and catches the remaining ghosts, including Tumblety.

Since, for unknown reasons, Castiel can't heal Ketch, he is picked up by an ambulance. After everyone is gone, Belphegor opens the warding so Kevin can get away, having chosen to risk going crazy on earth as an untethered spirit rather than return to being tortured in Hell.

In Reno, Amara leaves Chuck, having no interest in spending time with Him. She notes how she has changed and become the better version of herself, while Chuck remains the same petulant narcissist He always has been. She knows He's weak, so she abandons Him, like He did to her long ago, when He locked her away.

In Harlan, the spirits keep escaping from Hell. Sam, Dean, Belphegor, Castiel, and Rowena still have no plan on how to stop them, and they watch on as the souls continue to flood into the world. [2] 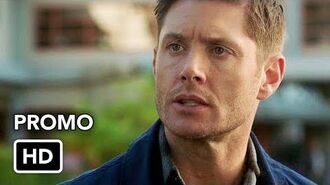 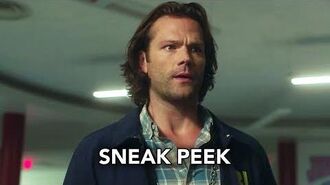