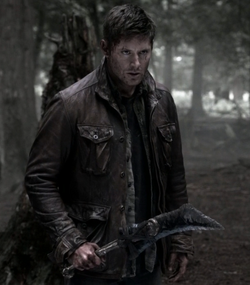 The Purgatory Blade is a weapon that is used by inhabitants of Purgatory, made from materials in the realm. Dean Winchester and Benny Lafitte are frequently seen carrying these blades in their time in Purgatory during Season 8.

During his time in Purgatory, Dean Winchester obtained this blade after knocking it away from a vampire, then using it to behead him.

It was made, rather crudely, out of materials from Purgatory, one of them being a bone. It is suggested that this blade is powerful, since it can kill dead monsters in Purgatory, and Dean thought it would be useful against demons on Earth. In the confrontation however, it had been swiped away.

It was later shown that Dean still had the blade in his possession and used to wipe out Benny's old nest, beheading at least five vampires with the blade. In flashbacks he uses it to behead a Leviathan and kill a few monsters attacking him, Castiel and Benny. Benny uses a similar blade for similar purposes.[1] In another flashback, Dean uses the blade to decapitate two Leviathans that attack him and Castiel and carries it with him through the portal out of Purgatory.[2]

When Dean gets a room in the Men of Letters bunker, he places the blade on his wall with all of his other weapons.[3]

Sam steals a similar blade from a monster during his trip to Purgatory, carrying it through Hell and back, only to offer it up to Benny as he escapes.[4]

Retrieved from "https://supernatural.fandom.com/wiki/Purgatory_Blade?oldid=314444"
Community content is available under CC-BY-SA unless otherwise noted.