Adjacent to Hell, according to Crowley

Purgatory was specifically created by God to restrain and hold the leviathans, however, it's also a realm where the souls of monsters go after they die. Here, the monster souls are fated to hunt and prey upon each other for eternity. Since then, it has become home to various other supernatural creatures.

Where Purgatory's located is largely unknown, however Crowley claims that it is adjacent to Hell. Crowley estimates there are 30-40 million souls there. Crowley makes a deal with Castiel that they will locate Purgatory to use the power of the souls housed there.

They start a plan where they use Samuel Campbell, getting his agreement with a promise to resurrect Mary Winchester, to capture the Alpha monsters who they are convinced know Purgatory's location.

The Alpha Vampire reveals to Sam and Dean that when monsters die, they don't go to Heaven or Hell. They go to Purgatory instead. The mystery that Samuel (under Crowley's demands) tries to torture him into solving is the location of it. The Alpha seems to hint that he knows, but doesn't clarify if he does. Crowley later appears and admits that Purgatory is "vast, unutilized, and Hell adjacent," and that he wants to develop it.

Crowley tortures the Alpha Shapeshifter into revealing the location, even going as far as threatening other shapeshifters' lives. The Alpha resists, and Crowley decapitates it.

Before Death leaves to retrieve Sam's soul from Lucifer's Cage, he tells Dean that despite how the brothers "cause disruption on a global scale", they are digging into something regarding souls. He encourages Dean to keep digging. He is most likely alluding to Purgatory. In "Like A Virgin", Bobby translates some details of an ancient manuscript that Sam and Dean salvaged from the dragon's sewers, and makes out only a few details based on them. According to Bobby, the dragons are reading an instruction manual to open a door to Purgatory, to let something in (bring something on Earth).

The Man Who Would Be King 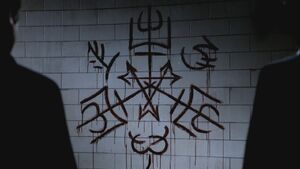 Both Castiel and Crowley are searching for Purgatory. The reason is for the souls. Castiel needs the souls' power for his war againist Raphael. Without the souls, Castiel does not have a chance of defeating the archangel. They find a way to open it from Dr. Visyak, a creature who is from Purgatory. When Crowley allies with Raphael, Cas gives them a fake jar of blood and performs the ceremony by himself. Castiel, like H.P. Lovecraft, has successfully opened Purgatory, and absorbed all souls inside. With this new power, Castiel proclaims himself the new God.

The door to Purgatory is open again.

Death reveals the true purpose of Purgatory as the prison for God's earliest creations the Leviathans; monstrosities of unimaginable power and hunger. Realizing the danger they posed to rest of creation, God created Purgatory as their prison and sealed them inside so they could not "chomp the entire petri dish". When Castiel absorbed the Purgatory souls he also absorbed the Leviathans which had begun to eat their way out of Castiel by rotting his vessel. Castiel later released all the souls back into Purgatory, but the Leviathans held on and took over his vessel, enabling them to run rampant across the Earth.

Survival of the Fittest

Dean surrounded by monsters in Purgatory.

Dean uses the Bone Of Righteous Mortal Washed In the Three Bloods of Fallen to destroy Dick Roman, the leader of the Leviathans. As a result, he and Castiel are transported to Purgatory along with Dick's essence. Dean and Castiel find themselves trapped in a dark, forest-like world surrounded by shadowy red eyed creatures - which Dean later identifies as Gorilla-Wolves.

During his search for Castiel, Dean is being pursued by two monsters, managing to kill the first. The second monster however, is able to overpower him and Dean is only saved by a vampire named Benny, who procceeds to decapitate the other monster. Benny and Dean talk and according to the former, a human-only portal, connected to the Earth, was created by God in case any got trapped in Purgatory. Having made a deal with Benny, claiming that they would first find the lost angel. Eventually, Dean escapes Purgatory, carrying Benny's soul out of Purgatory in his arm and later resurrects the vampire. When Dean re-encounters Sam, he tells him that Castiel didn't survive Purgatory. ("We Need To Talk About Kevin")

In a flashback, Dean and Benny interogate a monster on the location of Castiel and after getting it, Dean kills the monster with Ruby's Knife. The two find Castiel who reveals that he abandoned Dean in Purgatory as he feared that the more powerful monsters there, including the Leviathans that are still in Purgatory, would come after him and he didn't think Dean was safe. They inform him of the escape method Benny knows, though Benny admits that he doesn't know if it will work for an angel and convince him to relucatantly join them in their search for a way out. Later, in another flashback, Castiel is shown reaching out for Dean and the two losing their grip on each other.

Dean, Benny and Castiel are ambushed by a Leviathan.

In a flashback, Dean, Benny and Castiel come under attack by three monsters and kill them all, wondering where monsters go when killed in Purgatory. They argue about the fact that Castiel's presence is drawing monsters to them and that he may not be able to make it through the way out as he's not human or former human, but are forced to run when Castiel detects Leviathans nearby. Two Leviathans ambush them and Dean decapitates one while the other gets the drop on Castiel and nearly kills him before Benny decapitates her.

Purgatory is the condition or process of purification or temporary punishment in which, it is believed, the souls of those who die in a state of grace are made ready for Heaven. This is a theological idea that has ancient roots and is well-attested in early Christian literature, while the poetic conception of purgatory as a geographically situated place is largely the creation of medieval Christian piety and imagination.

Retrieved from "https://supernatural.fandom.com/wiki/Purgatory?oldid=61384"
Community content is available under CC-BY-SA unless otherwise noted.