Sam and Dean must figure out how to stop the bloodshed when Donatello (guest star Keith Szarabajka), who, in his current condition, is inadvertently scrambling the order of future prophets. Nick comes face to face with his past.

On the bottom of the ocean, the Ma'Lak box sits. Inside, Dean pounds on the lid until his fingers bleed, and water slowly leaks in. There's a loud creaking, and Dean continues pounding on the lid and yelling to Sam. He tries to call his brother and watches the battery go out.

Dean wakes up from his nightmare in his room. Sam comes in and Dean says that it was a bad dream as he looks at his bloody fingers. His younger brother says that Michael can keep Dean alive forever in the box, and Dean notes that there's no other choice according to Billie's book. Sam insists that there has to be another way, but admits that he doesn't know of one.

A gagged woman lies tied up, and a man—Tony Alvarez—pours salt into a tank of water and stirs it. He then picks up the woman and puts her into the tank, and she sinks beneath the water. The man then picks up a knife and cuts the woman's arms, and holds her beneath the water until she drowns. He looks up at whispering fills the room.

A police officer brings food to Nick in the hospital, and the officer says that least four jurisdictions want to prosecute. Nick insists that none of it was his fault because Lucifer possessed him and changed him. The officer says that Nick is done and buried, and will be locked up for the rest of his life.

They get into the Impala and Dean makes sure that Sam is still with him. Sam says that he gave his word, and they haven't told Jack and Castiel yet. Dean tells him that he's not big on goodbyes, and reminds Sam that there's no other way. As Dean goes to an outside door, Sam calls Castiel, who says that he wasn't able to talk Dean out of it and he's counting on Castiel. Castiel hasn't found any way to extract Michael from Dean, and suggests that he speak to Dean. Sam says that it wouldn't matter to him. Dean comes out of the building and back to the Impala.

That night, Tony takes a gagged man out of a room in a machine shop, mutters about the firstborn of Egypt, and cuts the man's throat. Once his prisoner is dead, Tony removes his shirt and carves into his chest as the whispering fills the air around him.

Sam and Dean drive through the night, and Dean hears Michael inside of his head, screaming. He tells Sam that he wasn't always the greatest brother to him, and Sam says that Dean was the only one always there for him and practically raised him. Dean says that things got dicey the way John was and he didn't look out for Sam the way he should have. John sometimes sent Dean away when Dean pissed him off, and Sam says that he knew it and tells his brother that if he's going to keep his mind off of where they're going, he needs Dean to stop making deathbed apologies.

Nick prays to Lucifer and the officer hears him and assumes that he's talking to God. When Nick asks to use the bathroom, the officer unhandcuffs him from the bed and Nick knocks him out with the bedpan and then beats him to death. He then gets his clothing and leaves.

Sam tells Dean that he found them a case on the way in Fort Dodge, Iowa. Dean agrees to do one last case, and Sam says that there have been two murders. One woman apparently bled to death in seawater and was dumped in an alley, and another man had his throat cut, and both of them had Enochian runes carved into their chests.

The next day in Fort Dodge, Sam and Dean go to see the second man Alan's twin brother Eddie. Eddie invites them and says that Alan was born four minutes ahead of him. He talks about how he and his brother were close, and Sam explains that the 'graffiti" was in an ancient language, and translates as "I am the Word". Alan wasn't a religious man, but he was friends with Tony and Tony always quoted similar phrases. Eddie looks at the paper and shows the Winchesters a brother of Tony with Enochian writing tattooed on his arms.

Back at the Impala, Dean calls Castiel and says that they're working a case. Castiel tells him that his plan is born of desperation, not reason, and Dean insists that he's fine with his plan. The angel warns him that he's making a terrible mistake, and Dean ignores him and asks about Tony. Castiel says that Tony is the next in line to be prophet after Donatello dies. Dean refuses to discuss his plan and hangs up despite Castiel's objections. Sam admits that he had to tell Castiel, and Dean tells him about Tony. The brothers wonder if Donatello is dead.

Donatello lies in a hospital bed in a coma. Dean calls Donatello's doctor, Rashad, and asks how Donatello is doing. Rashad confirms that Donatello is still alive, and Dean hangs up and tells Sam. That night they break into Tony's apartment and they find Enochian writing on the walls. There are photos of the two victims, and photos of other people. There are Biblical verses about Egyptian written as well, and the Winchesters realize that the two murders emulate the deaths of the Israelites in Egypt. There's a verse referring to fire, and the name of the Sphinx Machine Shop is visible in one photo.

At the machine shop, Tony chains up his third victim and pours gasoline on his legs. He leaves a trail of gasoline and moves away, and then lights it. Sam and Dean arrive, and Sam tackles Tony while Dean puts out the fire before it can reach the victim. Dean then calls Sam off as he chokes Tony, and punches him. Tony insists that he's carrying out God's work and hears a voice in his head, but he can no longer hear the voice. Sam tells him that who he heard wasn't God, and that the people he killed were innocent, and Dean says that Tony is a psycho and punches him. The brothers discuss if Tony heard something with Donatello in a coma, and Tony charges at them. He grabs Dean's gun and aims at the brothers, and then kills himself with it.

As the brothers drive off, Sam calls Castiel and says that he thought there could only be one prophet at a time. Castiel suggests that since Donatello is in a coma, he created a malformed prophet. Sam wonders how they end it if the next prophets are malformed as well, and Dean tells him that he knows how to end it.

Nick breaks into his old house and remembers seeing Sarah and Teddy dead. A mirror frosts over and the cabinet doors start banging. The ghost of Sarah appears and says that her she never left because of the unfinished business of her murder and Teddy's. Nick says that he was sorry, but Sarah says that he isn't. However, he explains to his surprised wife that he found and killed Abraxas, avenging her though Sarah says that her unfinished business is Nick. She reveals that she saw Nick choose Lucifer and be possessed. She soon realizes that he came back to reunite since he still yearns for the Devil. Nick insists that Lucifer chose him, but Sarah figures that Nick came there to find Lucifer again. When Nick denies it, Sarah says that he can prove it by rejecting Lucifer and let her move on. Sarah then sees Nick hesitate and he says that he can't and apologizes, and Sarah tells him that he is Lucifer and has doomed Sarah to stay there forever and doomed himself as well. He acknowledges her statement and tells his wife that he is sorry, as he leaves and Sarah asks where he's heading. Nick says that he's going to wherever it's darkest since that's where Lucifer is. The devastated Sarah calls out to her husband but he leaves her trapped spirit in their house.

Sam and Dean go to the hospital and Rashad tells them that they're making the right choice by killing Donatello. Castiel is there, posing as Dr. Novak, and Rashad says that Donatello has no mental activity. As Sam goes with Rashad, Castiel tells Dean that what happened to Donatello was necessary but he wishes there could be another way. When Dean says that he understands, Castiel tells him not to compare it to his suicidal plan. Dean insists that it has to be done and Castiel asks if it's goodbye. Sam comes back and shows Dean and Castiel a video of a comatose Donatello. Castiel translates, saying that it's the same thing Tony was saying. The angel realizes that Donatello is trying to organize his memories and Tony picked up on it. Castiel figures that he has to try and heal Donatello if there's a spark of hope, like Dean taught him.

The trio go into the room and tell Rashad that they're not going to let Donatello die after all. As Castiel tries to heal Donatello, Sam and Dean wait outside. Sam says that it's tough considering Donatello in limbo, and Dean tells him not to consider it and they'll know soon what will happen. His brother wonders what happens after that, and Dean tells him that nothing has changed.

The brothers go into the room and check with Castiel, who says that there's something uncertain in Donatello's mind. Donatello wakes up and they turn off the life support machines. He does so and Donatello continues breathing. He jerks and gasps as Rashad comes in, and Donatello stares at Dean in shock. Dean welcomes him back to the land of the living, and Dean tells Rashad that it's a miracle.

As Donatello eats Jell-O, Castiel tells Dean that it's the regular Donatello but he doesn't have a soul. Donatello asks what happened, and Dean leaves Castiel to explain and goes out to the Impala. Sam is waiting with beer and tosses his brother one, and says they're celebrating a win. He asks if Dean is sorry that he's kept Donatello alive but he's surrendering, or if he's sorry that everything they've done means nothing. Sam says that Dean is telling him to throw away family and friends. Dean tells Sam that he's tried everything, and Sam insists that they'll find something but what Dean is doing now is quitting. Donatello never quit fighting so they were eventually able to help him. Sam says that he believes in them, and punches Dean. Dean hugs him and Sam asks why he doesn't believe in them as well. After a moment, Dean says that they should. He suggests that Billie might be wrong, but regardless he believes in all of them. Castiel comes out and Dean says that he'll keep believing in them until he has no choice. However, he tells Sam that if the day comes, Sam and Castiel have to accept that it's the end and have to let him go. Sam agrees and they head home. 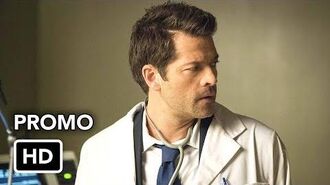