Poltergeists are invisible and telekinetic spirits that uniquely seek attention through sometimes violent and deadly actions. 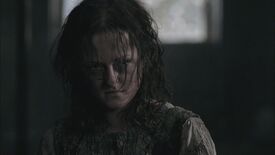 Poltergeists are a type of spirit that seeks recognition and attention, and will do anything to receive it. However, a Poltergeist is not a human spirit; it is a separate being of its own. Therefore, burning their remains is ineffective (and impossible). However, in John Winchester's journal, he claims that poltergeists can be destroyed the same way a normal hunter would deal with any other ghost, salting and burning the remains, this was later proven by Sam and Dean (and Gary) while dealing with Maggie Briggs. This suggests that the term "poltergeist" is used to describe more than one kind of spirtiual beings, some of which are human spirits and some of which aren't. As their whole existence solely encompasses receiving attention, their M.O. is different than of other ghosts; apparently, most poltergeist are either unable or unwilling to cross the Veil to manifest visually like most ghosts do, which means they are normally invisible to humans. There are some exceptions though.

When in a state of distress, they're strong enough to bench press a piano, they can also be quite powerful, one was able to perform several telekinetic attacks, in different areas of the house it was haunting at the several times, and when concentrated are very powerful telekinetic displays of power, able to throw grown men around like rag dolls. According to Missouri Moseley, they are sometimes attracted to the paranormal energy in places where beings of great evil (such as powerful demons like Azazel) manifested when they leave wounds of humans behind.

Most poltergeists remain within the Veil and manifest solely with growling and ghostly screaming sounds. They can only be seen by ghosts like Mary Winchester. Certain poltergeists, particularly ones that are human spirits like Maggie Briggs, can take the form they had in life or death, much like other ghosts.

Lithobolia: or, the Stone-Throwing Devil. Being an Exact and True Account (by way of Journal) of the various Actions of Infernal Spirits, or (Devils Incarnate) Witches, or both; and the great Disturbance and Amazement they gave to George Waltons Family, at a place called Great Island in the Province of New-Hantshire in New-England, chiefly in Throwing about (by an Invisible hand) Stone, Bricks, and Brick-bats of all sizes, with several other things, as Hammers, Mauls, Iron-Crows, Spits, and Other Domestick Utensils, as came into their Hellish Minds, and this for the space of a Quarter of a Year.

Hell of a title. 1698 account by Richard Chamberlain of 1682 haunting attributed to the neighbor being a witch. No record of whether neighbor was tried. Other notable American poltergeists-the Wizard of Livington, Virginia, 1797; Bell Witch, Kentucky, 1817; Fox sisters, 1848, were a hoax but initial events might be real.

Overlap with incubus/demonic possession in Entity and Smurl cases, both in the 1970s.

Missouri says poltergeists are unquiet spirits, not psychokinetic projections. They want attention and if they don't get it they progress from nuisance to danger. Only way to get rid of them is the same way you get rid of any spirit. Find the remains, or the haunted object, salt and burn, repeat as necessary.