A pentagram, or pentacle, is a symbol or amulet used for protection. Unlike what is commonly believed, pentacles are a very powerful protection against evil.

It appears in the Pad of Definitions (Pilot), in the Official Site, under the name of Silver Pentagram.

Its content says: "The most common symbol of Neo-Pagan Witchcraft, it has nevertheless been denigrated by movie and publishing industries that try to connect it with Satanism and other malevolent practices. However, like the Roman Cross or Crucifix, it is only when the symbol is INVERTED that it alludes to negativity. In its usual upright position (one point uppermost), the pentagram is an ancient symbol of protection from evil. Also called the endless knot (in its interlaced form), the pentagram was often displayed on doors, windows, and hearths of houses throughout pre-Christian Europe. It can be traced back to Egyptian and Sumerian cultures and has even been found on Native American medicine tools. Sometimes confused with the Star of David, or hexagram (a six-pointed star emblematic of Judaism), the pentagram is sometimes called the Star of Solomon, especially by ceremonial magicians."

In the series, it appears several times. The first one was in "Pilot", where Amy, the girlfriend of the boy killed by the Woman in White, wears a pentagram pendant. She tells Sam and Dean Winchester: "Troy gave it to me. Mostly to scare my parents with all that devil stuff." To which Sam replies "Actually, it means just the opposite. A pentagram is a protection against evil, really powerful. I mean, if you believe in that kind of thing." It appeared again in the same episode, in John Winchester's abandoned hotel room, which has a drawing of a pentagram pinned to the wall. 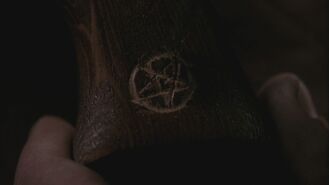 A pentagram carved into the handle of the Colt. 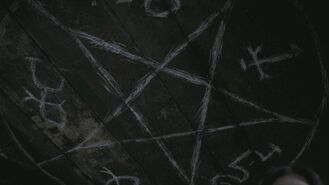 The devil's trap under the water tower which traps the Crossroad Demon. 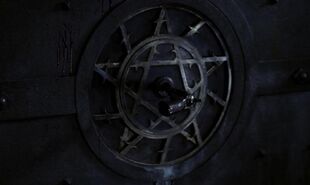 The lock on the Devil's Gate.
Add a photo to this gallery

A pentacle (or pentacle in Thelema) is an amulet used in magical evocation, generally made of parchment, paper or metal (although it can be made of other materials), on which the symbol of a spirit or energy being evoked is drawn. It is often worn around the neck or placed within the triangle of evocation. Protective symbols may also be included (sometimes on the reverse), a common one being the five-point form of the Seal of Solomon, called a pentacle of Solomon or pentangle of Solomon. Many varieties of pentacles can be found in the grimoires of Solomonic Magic; they are also used in some neopagan magical traditions, such as Wicca, alongside other magical tools.

Retrieved from "https://supernatural.fandom.com/wiki/Pentagram?oldid=319958"
Community content is available under CC-BY-SA unless otherwise noted.