When her friend is murdered by a wraith (guest star Jon Cor) with a taste for psychics, Missouri (guest star Loretta Devine) enlists the help of Dean and Jody (guest star Kim Rhodes) to protect her granddaughter, Patience (guest star Clark Backo), who has no idea she shares her grandmother's trait and could be next on the wraith's hit list. Meanwhile, Sam continues to work with Jack on learning how to control his powers.

Held captive by the Wraith, Patience asks what it will do with her as he states he will pluck her brain for psychic abilities. Patience says she's not psychic but he rebukes that as her grandmother believed otherwise and taunts her about her death, just as her father, Dean and Jody barge in. The Wraith retreats with Dean and Jody following him while James tries to free his daughter before he is stabbed through the throat by the wraith, to Patience's horror. The Wraith then ambushes Jody and kills her as it goes after Dean who is promptly overpowered and killed. Patience screams at the sight before it is revealed to be a vision of the future for her as the wraith is taunting her as it did previously.

James, Dean, and Jody then barge in the room as the wraith falls back. When James tries to free his daughter, Patience recalls her vision and warns him to move which he does, allowing him to evade the Wraith's attack. James tries to attack it but is overpowered and knocked to the ground as the wraith goes after Jody but Patience warns her of the attack as she tries to fight back before she too is knocked away. When the wraith attacks Dean, the latter overpowers the wraith and is the one to avenge Missouri by killing the Wraith. With everyone alive, Dean asks Patience how she knew what would happen as she replies she may be psychic.

At the bunker, Sam goes to talk to Jack who casually reveals he used his powers to move the pencil as Sam congratulates him but Jack takes his congrats in stride while revealing Dean's promise to kill him. Sam then tells Jack he won't allow Dean to hurt him as Jack starts to have doubts of himself.

At the Moseley's house, James and Patience return home with Dean and Jody accompany them with Patience speaking to Dean and Jody. She tells them her father gave her the option of living a normal life which he suggested or being a hunter but she is unsure of the path to follow. Dean agrees with her father of having a normal life as one can never get the chance to have it after becoming a hunter. Jody and Patience are surprised by his outlook but Jody gives Patience her number to contact her if she ever faces a dilemma.

Dean returns to the Bunker where he is met by Sam who tells him that he heard of Missouri Moseley's death which Dean casually confirms. Sam then confronts Dean on his treatment to Jack stating he is not evil as Dean becomes angry and states Sam is trying to use Jack to open a rift to the other world while clinging to the lost hope their mother is still alive. Dean goes on by stating Jack was the cause of Castiel's death and how he can't look at Jack without being disgusted. Overhearing this, Jack sadly says Castiel's name as his eyes glow.

In a black realm, the essence of Castiel is sleeping before awakening to hearing Jack's voice calling his name. Castiel then looks around confused at where he is at. 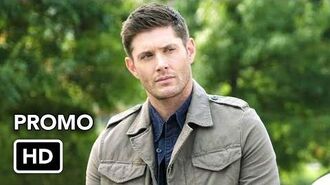