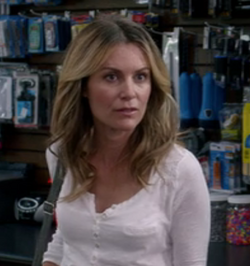 |occupation=Gas station manager|family = Tanya (daughter) Nora was Castiel's manager at the Gas-N-Sip he worked at when he was a human going by "Steve". She was impressed by his hard work, and invited him over one night after work. He thought it was a date, but she actually wanted him to babysit her daughter while she went on a date with Ephraim. Their date ended shortly as, unbeknownst to her, Ephraim left early to try to kill Castiel, and end his suffering. When she returned home, she told "Steve" that his caring side, which had overreacted when he thought her daughter was too hot, was what made him special.

Retrieved from "https://supernatural.fandom.com/wiki/Nora_(Gas-N-Sip)?oldid=168462"
Community content is available under CC-BY-SA unless otherwise noted.