Sam, Dean and Castiel are thrown into an epic battle. Meanwhile, Jack becomes disenchanted with all the lies, and an old friend from the past shows up.

After breaking out of the Ma'lak Box, a furious Jack blasts Sam, Dean, and Castiel across the room and then disappears. Castiel wonders how Jack could have broken free when the box was designed to hold an archangel, and Sam reminds him that Jack isn't an archangel. Castiel angrily tells the brothers that they should never have tried to lock Jack away, and Dean counters by saying that he wanted Jack dead, causing Castiel to storm out.

Sam reluctantly agrees with Dean that Jack has to die, though they have no idea how to kill him. Castiel tries to get into Hell, asking to look at the design of the Cage, but the demon he is talking to turns him away. A voice behind Castiel tells him that they are screwed, and he turns to see Chuck, who tells Castiel that he got his prayer and that Jack is a big problem.

Meanwhile, Jack wanders around the city, hearing the lies people tell each other. He yells at everyone to "stop lying," which briefly pauses time before everything reverts back to normal.

Sam and Dean head to Mirror Universe, a facial-recognition technology company, to see if they can track Jack's face. When Dean tries to use his fake FBI badge he blurts out the truth that he's looking for the Devil's son and his ID his fake. Quickly they realize that everyone is incapable of lying as fights break out between the company staff as they all tell the truth. This also leads to; Sam announcing his favorite singer is Celine Dion and not Elvis as he claims, the President of the United States revealing his entire tax history and links to Russia and North Korea and a demon deal he made with Crowley on National Television, and one of the news reporters revealing he's in love with the other. Everything is chaotic.

Jack visits his grandparents again but is accused by his grandmother of being a liar because after he left they phoned around and no-one had heard of him. She demands to know what he's done to her daughter causing Jack to snap and his eyes to flare gold.

Castiel arrives with Chuck who points out the chaos caused when no-one can lie. Dean angrily demands to know where he's been and Chuck prepares to sing before Dean smashes his guitar angrily.

Chuck teleports them all back to the Bunker and shows them just how bad everything is by turning on the radio revealing, among other things, that the Queen of England is a lizard before he snaps his fingers and reverts things so the truths were never told. He presents Team Free Will with a gun he calls "the Equalizer" that can kill Jack but to work means whoever pulls the trigger will also die - Chuck cannot use the gun because if he dies then reality will be destroyed. Castiel openly despises the idea saying that he called Chuck back to restore Jack's soul not kill him.

Dean insists that it's the only way and Castiel can either support it or walk away. Castiel walks away driving to a graveyard where Jack appears saying he's been looking for him.

Back in the bunker, Dean tells Sam that he's going to be the one to kill Jack and Sam states that he's not going to let Dean and Jack die at the same time storming out of the room angrily.

Jack and Castiel talk where Jack reveals he knows that killing Mary was a mistake but he still can't feel anything without a soul. He also didn't harm his grandmother, leaving before he did anything else.

Sam confronts Chuck and asks him if what the Apocalypse World version of Michael said was true about God and the alternate worlds; that Chuck gets bored and abandons them. Chuck evades the question asking if Sam believes what Michael was saying but admits that he does see what's going on in this world because this version of Sam and Dean are his favorites - they're "his show". Sam angrily demands why Chuck doesn't bother to step in and why the fate of the world always lands on their shoulders but Chuck simply responds that they're his boys. He also reveals that he's known all along where Jack is and Dean has already left the bunker with the gun.

Back at the graveyard, Castiel and Jack continue to talk when Dean arrives. Castiel stands between the two ordering Jack to run but Jack knocks him aside. Accepting what he's done as wrong, Jack kneels and tells Dean he understands why he has to die.

Sam arrives and runs towards the pair shouting at Dean to stop. As he gets closer, Chuck appears and stops him from moving further forward. Sam demands to know if he's enjoying what he's seeing but Chuck shushes him.

Dean cannot bring himself to kill Jack and drops the gun as Castiel hurries back over. Chuck angrily states that this is not how the story is supposed to end leading Sam and Dean to realize that Chuck has been playing them all along, creating their suffering for his own entertainment. Chuck orders Dean to kill Jack, promising to bring Mary back from the dead if he does.

Dean hesitates briefly, but refuses, saying it's not what Mary would have wanted and that Chuck can go to Hell for all the suffering he's put them through. In retaliation, Chuck snaps his fingers, smiting Jack. While Castiel tries to help Jack as he dies, Dean tries to fight Chuck, who merely throws Dean through a headstone. As Chuck walks away, Sam grabs the gun and fires it at Chuck, hitting them both in the shoulder but causing Chuck no real harm.

Furious, Chuck states that if this is how they want it, then the story is over. He welcomes them to The End and vanishes with darkness plunging over them all. Dean is confused at how Chuck killed Jack if the gun was the only thing that could and Castiel repeats what Chuck told him earlier, which is that "he's a writer" and that "writers lie."

Jack wakes up in the Empty, and the Shadow looms over him, smiling. He hears a voice behind him and turns to see Billie standing over him, and she tells Jack that they need to talk.

In the graveyard, the ground begins to shake as ghosts rise from it through fiery cracks. Castiel realizes it is the souls being released from Hell - Chuck has triggered the Apocalypse. An army of zombies rises up and surround the three, as previously defeated monsters The Woman in White, The Killer Clown, and Bloody Mary return from being sent to Hell.

Castiel takes out his angel blade, and Sam and Dean arm themselves with iron bars from a fence, as the zombie horde closes in and attacks. 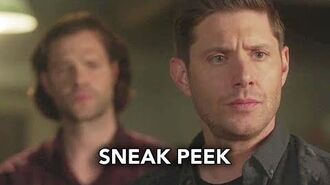