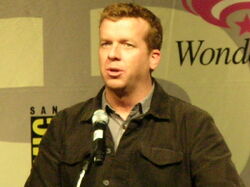 McG (born August 9, 1968) is an American television producer and director. His full name is Joseph McGinty Nichol. He was an Executive Producer of Supernatural from 2005 - 2013, for 169 episodes of the first 8 seasons. After stepping down, he remains part of the show as an Executive Consultant.

As of January 2015, McG's most recent project has been Producing The Mysteries of Laura, starring Debra Messing. McG first gained notice as the Director of Charlie's Angels, in 2000. He has worked on over 30 projects as Producer, and at least 17 as Director.

Retrieved from "https://supernatural.fandom.com/wiki/McG?oldid=317100"
Community content is available under CC-BY-SA unless otherwise noted.