All Along the Watchtower

Season 13 begins exactly where we left off, with Sam and Dean left to pick up the pieces after the loss of their mother, the demise of Crowley (Mark Sheppard) and the heartbreaking death of Castiel. The birth of Jack leaves the Winchester brothers with differing opinions on how to deal with a Nephilim. After being dragged into the breach, Mary (guest star Samantha Smith) must learn to survive Lucifer and an apocalyptic world.

In the dim light of the nursery, Sam finds a fully grown Jack sitting on the floor naked. Jack’s eyes glow gold as he looks at Sam with a sinister smile. Outside the cabin, Dean stands over the lifeless vessel of Castiel, but when he realizes that Sam is alone in the house, he grabs his gun and storms inside. Meanwhile, Jack stands up and asks Sam if he is his father. Sam tells Jack no, he isn’t, and as Dean enters the house Sam calls him upstairs to the nursery. Dean takes a shot at Jack without hesitation, which narrowly misses the nephilim’s head. The shot upsets Jack, who begins to scream. A blast of power radiates from his body that slams Sam and Dean into the wall, knocking them unconscious. Jack exits the nursery.

Later, Dean and Sam awaken to find the house empty. The brothers realize that Jack is gone and begin to search for him. Jack, wandering naked through the woods, stumbles on a restaurant, Pirate Pete’s. Two of the teen employees working there spot the nephilim on the security camera, completely nude and calling out for his father. One of the boys, Clark Barker, calls his mother, Sheriff Christine Barker.

Sam and Dean are on the road, searching for Jack, and discussing what to do with him. Dean wants to kill Jack, saying that if he isn’t evil now he will be. Sam is more hesitant, believing that Jack may not end up evil and may even be able to re-open the Apocalypse World rift.

Sheriff Barker arrives at Pirate Pete’s and confronts Jack with her gun drawn. However, upon noticing that the nephilim  is agitated by the sight of her firearm, she puts her hands up and convinces Jack to come to the station with her and her son. At the police station, Christine finds some clothes for Jack to wear and questions him about his parents. Jack says that his mother is in heaven and he is looking for his father. When the sheriff realizes that she isn’t going to get any useful information from Jack, she takes his prints. When she leaves to run the prints, Clark converses with Jack, clearly entertained by the nephilim and asking him how high he is. Jack tells Clark that he isn’t high, but that he is hungry. Meanwhile, back at the cabin, two angels appear, looking for Jack, and find the bodies of Castiel and Kelly Kline.

Sam tells Dean to pull over at Pirate Pete’s, saying that Jack probably stopped there. Dean agrees and says that while Sam is inside, he’ll call Jody and have her put out an APB on Jack. Inside, Sam finds a drunk woman, Miriam, pestering the other worker about french fries. Sam asks the boy if he’s seen a naked young man pass through and learns that Jack was taken in by the sheriff. When Sam calls Sheriff Barker, posing as an FBI agent, she confirms that she has Jack in custody and tells him that she has something he needs to see. The sheriff is referring to Jack’s fingerprints, which, instead of the usual whorls, are just vertical lines.

Outside Pirate Pete’s, Dean is standing by the Impala with battered, bloody knuckles. Miriam, exiting the restaurant, notices, saying “What did you do, punch a wall?” Dean, who had, in fact, punched a wall, doesn’t answer. Miriam begins ranting about a woman she’d known in college named Becky, who had annoyed her so much that she punched her Frozen poster and burned all of her things. Sam returns to the Impala, telling Dean that Jack is at the police station in town.

Back at the police station, the lights begin to flicker, and when Sheriff Barker investigates, she finds Clark and Jack in the break room, eating candy. Christine questions her son about the lights, and Clark shows her how Jack is able to use his powers to get candy from the vending machine. As Jack demonstrates, he screams in pain and clutches his head. As he begins to walk away, the sheriff tries to stop him. Jack lashes out and uses his powers to knock her unconscious. Dean and Sam arrive at the station and Jack, upon spotting Dean, starts to attack him but is tased and knocked out by Sam. Sheriff Barker awakens and locks Sam and Jack in a holding cell while she interrogates Dean, who reveals that he and Sam are brothers who hunt monsters and that Jack isn’t actually human; he is a nephilim, half-human, half-angel.
In the holding cell, Jack stirs awake. Sam calms him down before the nephilim attacks him, and Jack tells Sam that he learned English from his mother. Jack also says that his mother had known that the world would be a dangerous place for him, so he was forced to grow up quickly. When Jack asks about his father, Sam assumes that he is talking about Lucifer, but Jack tells Sam that Lucifer isn’t his father’s name-it’s Castiel. Jack says that his mother told him that Castiel would look after him and when he asks Sam about Castiel, Sam is forced to tell the nephilim that he is dead.

Meanwhile, outside the station, Clark is sneaking a cigarette when Miriam, possessed by an angel, arrives, accompanied by the two angels that had been searching for Jack at the cabin. While Dean is telling Sam that the sheriff took “the talk” as well as can be expected, they hear Clark screaming for help. Dean leaves to investigate with Sheriff Barker and the two discover that Miriam has taken Clark hostage, threatening to kill him unless the sheriff shoots Dean. The two angels find Jack in the holding cell and alert Miriam, who stabs Clark. A fight ensues between Dean and Miriam and the latter reveals that Jack is the “golden ticket” and is capable of almost anything. While Sam does his best to protect Jack from the angels, he is no match for them and is badly beaten. Slumped against the wall of the cell, Sam draws an angel banishing sigil with the blood from his nose and activates it, dispatching the angels.

Miriam escapes Dean and makes her way to the holding cell area, but she finds herself trapped between the Winchester brothers. She pretends to surrender, offering up her angel blade, but she instead stabs Jack in the heart, saying that if she can’t have him, no one will. Sam stabs her with a discarded angel blade from one of the banished angels and looks up to see Jack, unharmed by Miriam’s attack.

Clark is taken to the hospital and Sam tells Dean that he thinks Jack should return to the bunker with them. Dean agrees, saying that while he still thinks that the nephilim will become evil, the bunker is the safest place for him because he can’t hurt anyone but them. Sam, Dean, and Jack return to the cabin by the lake. They build funeral pyres for Castiel  and Kelly, and when Sam is reluctant to burn Castiel’s body, Dean reveals that he has already prayed to God to ask him to bring the angel back, to no avail. Sam, Dean, and Jack watch the flames dance on the pyres as they say goodbye to Castiel and Kelly.

In Apocalypse World, Mary attempts to evade Lucifer, but the archangel materializes in front of her, reminding Mary that he can teleport. Tired and defeated, Mary asks if Lucifer is going to kill her. Lucifer telepathically throws her aside, but instead of impaling Mary on a spike, he declares that he may need her. 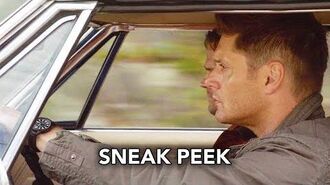