Lily Sunder Has Some Regrets

Lily Sunder Has Some Regrets

Lily Sunder (guest star Alicia Witt) steeps herself in black magic, honing her powers for over a century, waiting to exact revenge on a band of angels that murdered her family. Sam and Dean must work quickly to stop Castiel from becoming her next victim.

The episode opens with an angel named Benjamin is playing Rampage in an old-school arcade. Suddenly, a woman with red hair with an eye patch and two angel blades appears. Benjamin didn't recognize the woman and moves to attack , but the woman was immune to Benjamin's angel tricks . Benjamin draws his blade , but the woman has two blades . The woman battles Benjamin who proves to be no match for her and eventually pins the angel up against a wall. Benjamin begs for help over "angel radio", weaponless and psychically reaching out to the other angels, including Castiel. Lily tells him she's "waited so long" and kills him with an angel blade.

In the bunker, Mary is out on a solo shapeshifter hunt while Sam and Dean lament their inability to track down Kelly Kline and her unborn baby. Dean is frustrated that Castiel has been no help, and Sam is frustrated that Dean's giving Cass the cold shoulder for killing Billie though Dean clarifies: "I'm not pissed that he cares about us. I'm grateful." However, he's worried that Billie warned about the "cosmic consequences" of breaking their deal. Cass arrives to insist that he did the right thing, and also, he's taking off on a personal errand that he heard about via angel radio. Sam immediately offers to come with them.Dean reluctantly agrees, if only to keep Cass "from doing anything else stupid."

In the car, Dean and Cass aren't speaking, and Sam's attempts to play peacemaker fall on sullen silence. Cass finally explains that this mission is urgent because Benjamin wouldn't call for help lightly. Dean snarks that Benjamin probably also wouldn't make half-cocked, knee-jerk choices. Castiel snaps that what he likes about Benjamin is that "he's sarcastic, but he's thoughtful and appreciative, too." Sam looks supremely uncomfortable as they arrive at the arcade.

When they arrive at the arcade, angel wings are burned on the wall, and Castiel's baffled at how a warrior like Benjamin was defeated. When Dean finds a discarded angel blade, Cass touches it and realizes it's not Benjamin's. Across town, the redhead, Lily Sunder, bolts up from where she's been meditating and murmurs, "Castiel." She presses a kiss to an old-timey photo of a child before leaving her hotel.

Cass tells the brothers that he needs to meet his former commander, Ishim, and he needs to go alone. He snipes at Dean, "If I plan to do anything else stupid, I'll let you know." Inside, Ishim and Mirabel, the only angels left from Castiel's original squadron, give him grief for being the angel who caused them all to fall and lose their wings. Castiel responds that sometimes sacrifice is required, but Ishim points out most of the sacrifices seem to come from other angels.

Outside, Sam correctly predicts that Dean's ready to storm in. Once they're inside, they cram into the booth next to Cass, while Ishim dispatches Mirabel to make sure they weren't followed. Ishim tosses dessert money onto the table and leaves, telling Cass to find him at the safe house. Sam and Dean don't understand why Cass lets him speak to him like that, but Cass says he's willing to take it if Ishim will help stop the killing.

In the alley, Mirabel is killed by Lily, and Ishim finds her body. Lily appears from behind and fights him for a bit until Cass joins in. Cass recognizes her for a brief second, seeing her in a flashback. The Winchesters join in, but Lily declines to harm any humans, blinding them with angelic light before escaping in her car.

At a safe house, Cass demands an explanation for why Lily's still alive and explains to the brothers how they knew her. A flashback sequence is shown in 1901, Maine. Before the Apocalypse, angels rarely came to Earth, but Ishim's squadron is there because an angel fell in love with a human woman, and they had a child. Ishim explains that a Nephilim is a creature with a human soul mixed with angelic grace. These creatures are dangerous because they can grow into their powers and destroy entire worlds, so they're forbidden by one of the oldest laws in heaven. Hence, Ishim leads his troops to make things right.

The angel Akobel comes out of his house with Lily, and Ishim chides Akobel for taking up with "a filthy animal." Akobel tells Lily to run inside, and whispers something to her and she does. Akobel passionately defends humans, asking "How could anyone know them and not love them?" Nevertheless, Cass, in a female vessel, reads his death sentence for breaking their most sacred oath while Mirabel stabs him. Ishim tells his squad that he'll take care of the rest himself, and he goes inside to find Lily.

In the present, Cass tells the Winchesters that he was just following orders, but everyone wonders how Lily was still alive. Ishim says she was a professor of apocalyptic literature, and he took mercy on her, but since then, she's made a demonic pact to keep her young, strong, and powerful. The Winchesters have heard enough and head out to explain to Lily that Cass is different now, so she needs to lay off, even though the angels warn them that it won't work.

Once he and Cass are alone, Ishim reminds him that they're meant to stay away from humans not because the angels are a danger to humans, but because humans are a danger to angels. Cass makes a counterpoint, saying his friendship with the Winchesters has made him stronger. Cass uses his angel mojo to heal Ishim's cut, as well.

Sam and Dean arrive at Lily's hotel and they agree that their first plan is to ask her nicely to lay off the angel murder. They find her and offer condolences for what happened to her family but point out that it's not Cass' fault that Heaven has rules about Nephilim. Lily's shocked and sets them straight about what happened inside the house in 1901. In a flashback, she explains that her life's work was angels. One day she summoned Ishim, and he became obsessed with her. He called it love, but she had to ask Akobel to protect her from Ishim. When the angels arrived, Akobel ordered Lily to take May and run while he distracted them. As Lily desperately gathered her things, Akobel was killed by Mirabel and Ishim entered the house to confront her.He tells her he wanted to break her heart like she broke his by using magic to keep her powerless. Pinning a powerless Lily with telekinesis, Ishim accused her of leaving him for Akobel and murders May in revenge.She concludes her story for the Winchesters: "I had my daughter long before I ever laid eyes on an angel," revealing that May was human.

The brothers believe her, and Dean rushes to the safe house while Sam stays with Lily. While they wait, he asks why she's taking her revenge now, after all these years. She explains that before the angels lost their wings, she wasn't able to hunt them down. Furthermore, she didn't make a demon pact and instead uses Enochian magic. She touches her eye patch, indicating that it was the price of admission, and she says that every time she uses one of their spells, a piece of her soul burns away. Lily mentions that she used to dream about her daughter every night, but now she dreams about nothing.

Dean arrives to find a weakened Cass. He tells Cass that Lily's daughter was human, but Ishim scoffs, "Who are you going to believe, your brother or a filthy ape?" Castiel notices Ishim's behavior and the latter attacks. He repels Dean's attack, then attacks Cass, hissing that he used to envy Cass for being chosen by God, but now he's sad, pathetic, and weak. Castiel headbutts him but Ishim slams him to the ground. Ishim proposes to cure Cass of his human weakness like he did his by cutting it out. Dean stops him as drew an angel-banishing sigil in blood, but Ishim points out that this will blast all the angels in the room, stating he'll survive but Cass might not survive in his weakened state. Realizing this, Dean's hand immediately drops as Ishim taunts him.

Lily and Sam show up, joining the fight. Lily removes her eye patch to reveal an occluded orb that blasts angel light and overwhelms him, saying she would "never be powerless again". She tries to keep him immobile while he struggles forward. But when he goes to strike a killing blow against her, Castiel appears behind him and stabs him in the back, killing him. With Ishim dead, the Winchesters broadly hint that Lily needs to retire her revenge agenda while she is unsure.

Dean tries to threaten her but Castiel stops him and apologizes to Lily. He says that while he may not have known they were killing an innocent, his ignorance is no excuse. He tells her he can't imagine the depths of her loss and pain and says if she leaves there and finds she still can't forgive him, "I'll be waiting." Instead, Lily with a tear in her eye, thanks him and leaves.

Back in the bunker, Dean hands Cass a beer, and Sam assures Cass that he's changed for the better, and the loyalty he showed them took real strength. Castiel affirms that he doesn't regret what he did to Billie, even if it costs him his life. Apologies out of the way, they start making plans to track down Kelly and her baby that could be even more dangerous than a Nephilim. Sam points out, it's also a mother and her child. Castiel acknowledges that there was a time when he wouldn't have hesitated to strike, but now he isn't sure. He ends the episode toasting, hoping to find a better way. 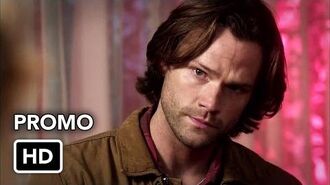 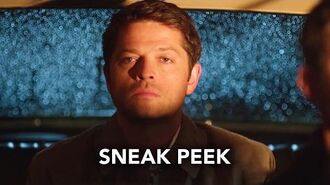 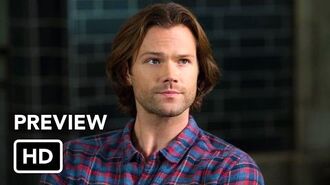