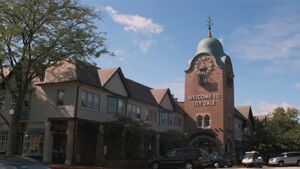 Lily Dale is a town that appears in the episode The Mentalists. Due to mysterious deaths, Sam and Dean come to town. The majority of the residents in Lily Dale are "mediums" or "psychics."

There are some actual psychics who live in town but most of the "psychics" are fakers who make good livings nonetheless.

Due to the numerous murders, Sam and Dean come to town trying to figure out what is doing the killing. As they investigate, everyone in town sees that Sam is still angry at Dean. The Winchesters eventually figure out that it is a ghost killing the people. They head to the museum in town where they find a picture of Kate and Margaret Fox. Believing the murderous ghost is Kate, they burn her bones, but they eventually find out that it was her sister Margaret. Sam finds her bones and burns them. As they leave, Sam and Dean reconcile and begin working together again.

Retrieved from "https://supernatural.fandom.com/wiki/Lily_Dale?oldid=334386"
Community content is available under CC-BY-SA unless otherwise noted.