Kara was a waitress at the Biggerson's restaurant in Santa Fe, New Mexico. She served Castiel when he was traveling from Biggerson's to Biggerson's in an attempt to keep the Angel Tablet hidden from Naomi and her angels. After she refilled Castiel's coffee, he informed her about when humans had first discovered coffee, after watching goats chew the berries of the plant. In order to stay at a table, she told Castiel he had to buy something other than coffee, so he ordered the smart-heart beer-battered tempura tempters. 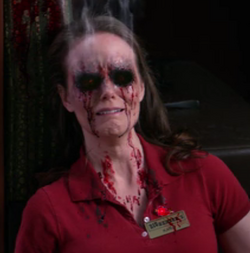 As Castiel was constantly teleporting to a different Biggerson's, it made it difficult to locate him. Naomi had some of the angels under her command kill all the humans at the Santa Fe location to draw him out. Kara was left alive, with her eyes burned out by the angels, and she was left muttering to Castiel that the other angels said he has to stop. After Naomi showed up, she snapped her fingers, breaking Kara's neck and killing her.

Retrieved from "https://supernatural.fandom.com/wiki/Kara?oldid=314008"
Community content is available under CC-BY-SA unless otherwise noted.