All Episodes of the Series, including Pilot

Born to Donna Joan Shaffer and Alan Ackles on March 1st, 1978 in Dallas, Texas, he is three years younger than brother Joshua and seven years older than sister Mackenzie. Although he had planned to study sports medicine and become a physical therapist, he moved to Los Angeles to launch himself in an acting career.

Having modeled on and off since the age of 4, Jensen focused on an acting career in 1996. Since then he appeared in several guest roles, such as in "Mr. Rhodes", "Cybill" and "Sweet Valley High". In 1997, he joined the cast of "Days of Our Lives" as Eric Brady which nominated him for several awards. This was followed by several other shows, such as "Dark Angel", "Smallville" and "Dawson's Creek".

In 2005, he was cast as the older brother Dean Winchester on Supernatural, and has starred in all the episodes till date, up to it's final 15th season. He has also directed an episode of the sixth season, Weekend at Bobby's and one of the seventh season, The Girl Next Door, as well as season eight's Heartache. In the tenth season he directed Soul Survivor and in the eleventh season The Bad Seed.

Ackles has done his share in voice acting. His notable roles are Jason Todd in Batman: Under The Red Hood, Gibson in the video game TRON: Evolution and Kyle Madigan in the Parasite Eve spin-off, The 3rd Birthday which was set to be released in March 29, 2011.

He has had many relationships, including a somewhat discreet relationship with lesser known Sam (last name unknown). However, on May 15th, 2010, he married long time girlfriend Danneel Harris. Their daughter Justice Jay "JJ" Ackles was born on May 30, 2013. She shares her birthday with Mark Sheppard, who played Crowley.

Jensen and Danneel welcomed twins, a boy and a girl, on Friday, December 2nd 2016, and named them Zeppelin Bram and Arrow Rhodes Ackles. He also is Best friends with his co-star, Jared Padalecki, from supernatural and is a brother to him and uncle to Padalecki's three children Jensen also has a great friendship with Misha Collins and did a campaign called you are not alone for mental health he has been involved with charities and supportive of not only friends but also his family

season 8
Photoshoots for other TV series

Days of Our Lives

2011
Supernatural panels at other conventions 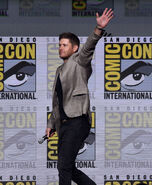