Sam, Dean and Castiel investigate a string of suspicious deaths that have a biblical element to them.

At the bunker, Hunters gather to look at Mary's things and mourn her death. Sam, Dean, and Castiel come in and Dean says that they gave Mary a Hunter's send-off a few days earlier. He says that they got a second chance with Mary and realized that she was tough, strong, and stubborn as hell. Dean tells them that Mary could handle anything even if she couldn't cook, and says that she wasn't there long enough but they're glad for the time that they had. He says goodbye and everyone raises their bottles to toast her.

Bobby comes in and throws a hatchet into a Hunter's head. As they drag the body away, Bobby explains that a wraith infiltrated the group and came there to gloat. He asks how Dean is doing, and Sam admits that it's hard to tell. Dean comes over after the other Hunters have headed out, and Sam suggests that they drink and talk about. His brother points out that they've been doing it already and walks out.

Later in the kitchen, Sam, Bobby, and Castiel drink and look at a photo of Mary and a young Dean. Dean comes in and says that he needs a drink, but he needs to get out of the bunker for a while. When Sam says that they need to talk about Jack, Dean tells him that they will and leaves. Bobby admits that he liked Jack but there's only one way that it ends. Castiel says that they have to help Jack, and that he may not realize what did. Bobby points out that with Jack's human side gone, Lucifer is all that's left. He's going to contact some of his people and put Jack down once and for all.

Jack sits in an abandoned train station and remembers Mary's last moments before he killed her. He wishes that Kelly was there, and his subconscious hallucination of Lucifer appears and says that Jack sees him because he knows he's telling him the truth. Lucifer says that he's part of Jack's DNA and is locked in his head forever. He says that the Winchesters never loved Jack, and Jack explains that he'll explain that it was an accident. Lucifer tells him that they hate him and Jack is all that he's got.

Dean drives to a forest, sits, and cries.

In Heaven, Castiel meets Duma and says that he has to see Naomi. Duma tells him again that she's unavailable in a small cell and Duma is leading Heaven. Castiel explains that it involves Jack, who has grown dangerous since he burned through his soul to save Castiel among others. Now Jack is on the run, and Castiel hopes that Jack can be rehabilitated. Duma says that she'll see what she can do and walks away.

Dean returns to the bunker and finds Sam checking the internet. Sam explains that they need to find Jack before Bobby and his crew does, and he can't stop thinking about Mary. They know the truth that God and angels are real, and Dean points out that they're dicks. Sam notes that Mary is in a good place with John, and Dean says that there wasn't enough of her soul left to bring her back and walks out.

Duma appears to Jack and reminds him that they met in Heaven. She tells him that it wasn't his fault what happened with Mary. Duma says that it was a mistake and he deserves redemption, and that he has a glorious destiny. She tells him that there was a time when God punished those who didn't respect Heaven. When he left, it fell apart, and Duma figures that Jack can save many others including Heaven itself by making the world better. She suggests that he consider how happy it would make Sam and Dean.

Jack and Duma go to see Dr. Harrison Tate, who has written a book about Biblical lies and reject God. Duma points out that in less civilized times his beliefs would be heresy. Jack says that he went to Heaven and God is his grandfather, and his father is Lucifer. Duma says that Tate can avoid divine retribution by telling his readers that everything he has written is false. When Tate refuses and goes to call security, Jack turns him into a statue of salt.

At the bunker, Castiel tells Sam and Dean that Heaven promised that every effort would be made to locate Jack. Sam found find a report about Tate's death, and Castiel points out that it's Biblical. A few hours later, a woman accused of being a fake faith healer was swallowed up when the earth opened up underneath her. They figure that Jack was responsible.

In Heaven, Duma tells Jack that he's done excellent work. She says that words can't express how Sam and Dean will feel, and tells Jack that he could make an angel by taking a predisposed human's soul and forging it into an angel. Jack agrees, and Duma leads him to God's throne where he heard prayers. She tells him to focus and hear, and then leaves. When Jack sits on the throne, he hears all of the voices calling to God in pray.

At a prayer group, Shelley leads the group into prayer. Once they conclude, Jack appears in the back and Shelley asks him to join them. He asks the group if they meant it when they said they wanted to go to Heaven and become angels. They all agree and Shelley says that it would be a dream. Jack's eyes turn golden and lightning flashes outside, and his angel wings appear. Shelley asks who he is, and Jack asks them to come with him to Heaven. Pastor Ames comes in and Jack explains what he was doing. He asks if Ames would like to join them, and Ames says that it isn't possible. Jack asks him if he doesn't believe, and Ames says that he doesn't believe in Jack. The group is enraptured, and Jack raises his hand against the pastor, who falls to the ground as worms start to consume him from within. Jack and the group disappear as Ames screams in pain.

The next day, Sam, Dean, and Castiel arrive at the hospital where the heavily bandaged Ames is being treated. Ames says that Jack was taking the group to become angels, and Sam shows him a photo of Jack. The pastor confirms that it was Jack and that he said he was carrying out Heaven's orders. The trio go out in the hallway and Castiel confirms that it's another Biblical punishment. In the room, a worm crawls out of Ames' mouth.

Back at the bunker, Dean tells Sam that they have to stop Jack once and for all now that Heaven has him. He shows Sam the Ma'lak box that he crafted and figures that they can use it to contain Jack. Dean says that it has to be Jack's choice, and he might agree if he only has to stay in there long enough to cast the spell to fix his soul. He admits that they know there's no such spell but Jack doesn't, and Sam has to be the one to lie to Jack and convince him.

The angel Eremiel is at the playground when Castiel approaches him and asks him to open the portal. When Eremiel tells him that the portal is closed to him, Castiel insists that he's going to Heaven and Eremiel draws an angel blade.

In Heaven, Jack transforms the group members into angels and Duma tells Jack that it's working. Eremiel and Castiel come in, and Castiel shoves the stunned Eremiel to the ground. Jack says that he's making angels, and Castiel tells Duma that they'll talk privately.

In the bunker, Sam prays to Jack, telling him that they're family and bad things happen to families. He tells Jack that they want to talk to him so that they can move forward.

Castiel tells Duma that he knows what she's up to. Duma insists that she's saving their kind and the world.

Sam says that they need to see Jack and their mothers would want it.

Duma warns Castiel that she can't control Jack. She figures that she can guide him even though he doesn't have a soul.

Sam prays that they want things back the way they were.

When Castiel threatens to take Jack out of Heaven, Duma says that she'll destroy Mary and John's shared Heaven. Castiel kills her and goes back to the throne room.

Jack teleports to the bunker and says that he's glad they want him there. He explains what he's been doing, and admits that he's missed them. Dean tells Sam to tell Jack how they want to clear things up between them, and Jack admits that he regrets what happened. He calls Mary's death an "accident", and explains that Mary kept pushing him and he snapped. Before he knew it, it was all over. Jack wishes that it didn't happen, and Dean says that they wish it hadn't happened but they forgive him for the "accident". When Jack says that he wants things to go back the way they were, Dean tells him that they need to keep him safe and prevent another "accident" until they can fix his soul. Sam agrees, saying that they need to get Jack better.

The Winchesters take Jack to the box and Dean explains that it's warded to keep Jack from hurting anyone or anyone hurting him. Jack says that he understands and gets into the box. He asks how long until he can get out, and Sam says that it won't be long and assures Jack that they've got it. Jack lies down and Dean closes the lid. Dean locks the lid shut and Sam walks out.

Jack calls out, asking if the Winchesters are still there. There's no response, and Jack turns the light on his phone on.

Out in the hallway, Sam and Dean hear Jack calling to them. They go to the kitchen and pour themselves drink, and Sam wonders what they do now. Dean figures that they have to go on, and Sam doesn't know if he can do it. He says that he never thought it would end badly with Jack, and Dean points out that they knew it would be a long shot.

Lucifer appears to Jack and says that he got played, and points out that trust is a two-way street.

Castiel tells the Winchesters that Duma was manipulating Jack, and they have to find him and tell him. The brothers explain that Jack is locked up and he's going to stay there.

Dean says that Jack agreed to go into the box because he knew deep down that it was for the best, but Castiel insists that they're manipulating him just like Duma did.

Lucifer tells Jack to bring it, and the box glows with angelic light.

As Dean says that it's their only play, the bunker shakes and the alarm goes off. The trio runs to the box and discovers that it's shattered open. Jack steps out, his eyes glowing. 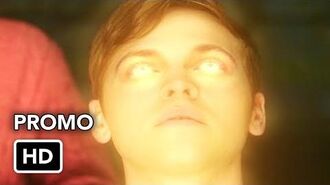 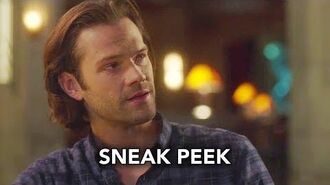