Book of the Damned

Sam and Castiel follow up on a lead about the Mark of Cain. Dean and Rowena (guest star Ruth Connell) meet.

Sam, worried about Dean, contacts Castiel with a plan to break Metatron out of Heaven's jail to interrogate him further about the Mark of Cain. Sam and Castiel go to the playground with the portal to Heaven, where Hannah takes a temporary male vessel to talk to them. She refuses to hand over Metatron as he's too dangerous to let out of his cell prompting Sam and Cass seek out psychic Oliver Pryce, where Sam and Castiel ask him to put them in contact with Bobby Singer in Heaven. They perform a seance, Sam placing Bobby's old hat on the table. In his Heaven Bobby is sitting in the living room in his old house, drinking whiskey, reading a Tori Spelling autobiography and listening to the Kenny Rogers' "The Gambler" on the radio, when Sam's voice comes through over the radio asking for his help.

Sam tells Bobby about the Mark of Cain, and Castiel tells him how to find the escape hatch from his personal Heaven and then find and open the portal to Earth. Bobby looks around his house until he finds a loose thread sticking out of a rug, pulling on it leads him out the escape hatch, setting off an alarm. To throw the angels off he lets out a bunch of other souls that are in the same corridor, all with the name Robert Singer (and one Roberta Singer). In the chaos, Bobby slips away. He opens door 42, which is the portal to Earth. Down on Earth, Sam distracts the guard angels while Castiel runs to the portal in the playground and jumps into it. He arrives in Heaven and tells Bobby that Dean doesn't know they're doing this.

They break Metatron out of his cell and take him to Earth, where Sam takes his grace, storing it in a glass jar, and shoots him in the leg. Metatron reveals that he really doesn't know if the Mark can be removed or how, telling Sam he was just buying time with Dean after he lost control. Castiel wants to kill him on the spot, but Metatron buys himself some time by offering to take Castiel to the remainder of his grace.

At Crowley's Lair, Rowena gets a demon underling to reveal the location of the place where Crowley was held captive the previous year –- the Men of Letters Bunker. However, due to interference, the demon is only able to get it down to a 10-mile radius.

While at a local bar, trying to enjoy some nachos and a beer, Dean decides to teach some obnoxious college boys a lesson by hustling pool. After having taken their money and a watch from one of them, he leaves for the bathroom. As he is washing his face, he briefly sees his eyes flash black, causing him to panic at he just saw. When Dean comes back out, he is attacked by the college boys who are under Rowena's attack dog spell. He defeats them but holds himself back from killing them. Rowena attacks Dean with a direct spell, but it doesn't affect him at all, to her disbelief. Dean holds a knife to her neck and asks why she's come to attack him. She tells him it's because he's a bad influence on her son. Confused, Dean asks who her son is and is surprised to learn it's Crowley. She tells Dean that Crowly could be a god if he didn't act like a lapdog whenever Dean snapped his fingers. Dean threatens to kill her, but she tells him she's the only one who can lift the spell on the college boys – if she dies, so do they.

Rowena returns to Crowley's furious but unharmed. She cuts and beats herself, then goes to Crowley and claiming that Dean did it to her. She admits that she was trying to kill him, but her spell didn't work. According to Crowley, it's because the Mark of Cain protects him, but Rowena is not impressed. She tells Crowley that that Mark is just a curse, the very "first curse" sure, but it can be removed. She doesn't know how to remove it, but she'll find a way. Rowena demands that Crowley go avenge Dean's actions against her, but Crowley just tells her that it's her own fault for going after Dean in the first place. Rowena taunts him telling him he needs to do something about the Winchesters or he's going look like a weakling and his underlings will revolt against him.

Crowley goes to meet Dean in the bar. Dean tells him he didn't hurt Rowena. They discuss how maybe they've both gone soft or gotten older – way back when, they would have been fighting it out instead of drinking and philosophizing together. Dean tells Crowley that "a wise man once told me, 'family don't end in blood,' but Dean points out that it doesn't start there, either. "Family cares about you, not what you can do for them." After hearing that from Dean, Crowley goes back and promptly throws Rowena out, wanting nothing more to do with her.

Sam and Dean reunite in the Bunker library, neither one telling the other what they've been up to. In his room, Sam pulls out a letter from Bobby that Castiel handed to him earlier. In his letter, Bobby advises Sam not to go behind Dean's back, because there might be one hell of a price. But he also says he knows that Sam will make the right choice, because he's a good man and Bobby's proud of him. Bobby also says he's glad he helped them, no matter what the price. Sam is moved to tears.

In Bobby's Heaven, the door opens. Hannah (in her male vessel) and a few other angels come into his room and stand there looking at him. He doesn't acknowledge them, as he's looking at a picture of Sam and Dean and smiling.

[After finding his escape hatch and emerging into the hallways of Heaven, an alarm is triggered]

[After Castiel steals the Grace of Metatron and Sam Winchester shoots him in the leg.] 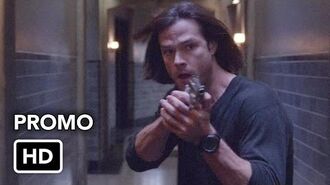