Sam and Dean are visited by an old friend. Castiel investigates the disappearance of a local teen.

A woman enters Rowena's apartment and begins to ransack the place. After several minutes of this, she collapses and falls, dead, to the floor.

Sam is getting frustrated with Dean's apathy. He goes out for a run and Eileen appears to him. They go back to the bunker and learn that she was taken to hell by the hellhound that killed her. She escaped hell when Chuck opened the doors and is now a ghost. Knowing that ghosts will eventually go insane and hurt people, she asks Sam and Dean if they can put a word in the angels and allow her into heaven. However, Dean reveals that a soul from hell can't go to heaven, so they determine that maybe they can create a 'soul catcher' for her.

Sam and Eileen go to Rowena's apartment to find a crystal to create the soul catcher. Sam recognizes the body on the floor as a witch, assumes she got into something she shouldn't have. While looking for the crystal, they come across a spell Rowena was creating when Mary died, to make a spirit flesh. Sam tells the surprised Eileen they will try it with Eileen and resurrect her. As they are getting to the car outside the apartment, Sam collapses and starts to spit up blood. He finds a hex bag in the wheel well of the car and tells Eileen to go and find Dean. Two witches, the mother and sister of the dead girl in Rowena's apartment, approach Sam. They want the spell and things from Rowena's apartment but can't enter because the spell will kill anyone who enters except, apparently, Sam. Dean arrives, a fight ensues, the witches die, and Sam, Dean and Eileen return to the bunker.

While this is all happening, Castiel stumbles into a case at a lake where one kid disappeared and was subsequently pulled from the lake, drained of his blood, and another is now missing. The local Sheriff is not being helpful so Castiel accompanies the missing kid's mom to the area where he was camping. The kid explains that he saw a monster dragging a body into the lake. He ran away, fell and twisted his ankle. At this point Sheriff Roy shows up, calling Castiel and the kid 'a big pain in his ass'. Castiel pulls out his Angel Blade and Sheriff Roy reveals that he is a Djinn. Sheriff Roy shoots Castiel in the chest (which heals immediately) and Castiel stabs him with the Angel Blade.

Back at the bunker, Sam is preparing the spell to make Eileen flesh again. He runs a bath and pours ingredients into the water. Eileen steps into the water as Sam recites the spell. When he's finished, Eileen steps out of the water, naked, and wraps herself in a towel. She walks over to Sam, hugs him and says, 'Thank you'.

At the end of the day Sam and Dean are hanging out in the war room. Sam again addresses how he feels Dean has given up and tells him that he thinks they can beat Chuck, but he can't do it without his brother.[1] 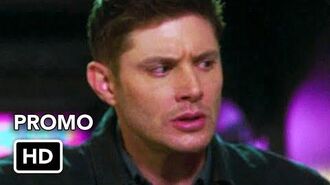