Edit
watch 01:32
Wiki Targeted (Entertainment)
Do you like this video?
Play Sound

Goddess of Luck
Lady Luck
Moira
Many others

Fortuna is a roman goddess of luck who often helped those she deems true heroes. In the 21st century, she ran a pool hall designed to steal luck from unsuspecting players.

Like all pagan gods, Fortuna was created by God himself to take the blame for when things went wrong and because the pagan gods made good stories. Unlike most of her kind, Fortuna still remembers the truth about her creation. Over the next several millennia, Fortuna established herself as a goddess of luck who favors those she considers true heroes. Amongst those Fortuna deemed worthy and helped were the legendary heroes Hercules, Cú Chulainn and Gilgamesh. However, as time went on, she began to believe that true heroes no longer existed.

In the 21st century, Fortuna opened a pool hall in Alaska where people bet their luck against each other where Fortuna poses as a customer named Moira whose sister is in a coma and uses her son Pax as manager. At the pool hall, Fortuna gives luck to those who win and takes luck from those who don't. The losers are often trapped in the hall, trying desperately to regain the lost luck caused by their winning streaks eventually turning sour. When Evie lost all of her luck, Fortuna allowed her to live in exchange for working as her bartender. Fortuna would also steal some of the luck people were winning "skimming a little bit off the top."

In 2020, after God left them with an average amount of luck, hunters Sam and Dean Winchester seek out Fortuna's pool hall based on a rumor that Garth had heard. Dean beats Fortuna in a game of pool, though she later implies that allowed him to win, seeing Dean as an easy mark. Following the death of Joey Six, the Winchesters realize that Fortuna is responsible for the way peoples luck is turning and threaten Pax to draw her out. Fortuna shows no care for her son's survival, causing Dean to release him and challenge the goddess to a game of pool for all the luck she has taken from him. Fortuna is uninterested in Dean based on the reading she took off of him when they played together, but shows interest in Sam who agrees to the goddess' challenge but only if they play for the lives of everyone in the pool hall. Fortuna refuses to play for anything but their luck, though she states that she will take their lives if they lose as they threatened her son and her livelihood.

Playing with Sam, who eventually misses a shot, Fortuna questions why they need the luck so bad and Sam explains that they have been cursed by God. After Fortuna thinks they're joking, Dean explains that the God literally cursed them. After Dean describes God to her, Fortuna realizes that they really are telling the truth. As she plays, Fortuna explains the true origins of pagan gods to the Winchesters and that while most gods have forgotten, she's old and holds a grudge. However, talking with Sam and Dean causes the goddess to become distracted and lose the game, impressing Fortuna with his ability to distract her.

The Winchesters explain to Fortuna that they intend to fight God and that if they lose, they will at least go down swinging. When Dean asks Fortuna to even up, she instead suggests they make it interesting: the Winchesters intend to fight God which is the stuff of heroes and so they will need the luck of heroes. Fortuna lists the legendary heroes she has helped in the past and suggests another game where they play for double or nothing which will cost their lives if they lose. Sam agrees to play, but not for more luck but for Fortuna to return the luck she has stolen from the people trapped in the pool hall and to close up shop. Though Fortuna insists that the people don't matter, Sam states that they matter to him with Dean agreeing with the sentiment. Fortuna agrees and quickly defeats Sam in the second game. Fortuna points out they challenged the Goddess of Luck in her own joint and asks what they thought would happen, but Dean states that they had to try which Fortuna calls stupid and leaves. 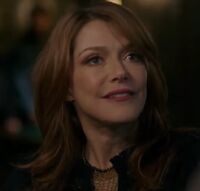 Though Dean expects Fortuna to kill them, she allows them to leave which Sam figures is because the goddess knows their bad luck will kill them on its own in the end. Unwilling to leave the people trapped by Fortuna, the Winchesters decide to try to figure out what will kill Fortuna and then return to rescue the innocent people. To their surprise, the people emerge moments later and Evie reveals that Fortuna shut down her pool hall because of them. Fortuna had recognized Sam and Dean as true heroes like in the old days, something that she thought had gone extinct. Fortuna sends the Winchesters a message through Evie: "don't play his game, make him play yours." Evie provides Sam and Dean with a coin from Fortuna which restores the luck God had taken from them though Dean is disappointed to learn that Fortuna didn't give them extra luck which Sam suggests is because Fortuna thinks they are real heroes who might not get all the shortcuts after all.

Fortuna held a grudge on how deities like her became the scapegoat for humanity's misfortunes. While she initially did not care if the Winchesters killed her son, she later included the threat to her son as part of her vengeance, implying she was bluffing to save him. She also disliked having to survive in the wilderness after her religion lost favor.

Despite her vengefulness, Fortuna is not completely unreasonable, particularly towards those she respects. She showed respect for Sam's skill when he defeated her in a game of pool by distracting her through talking. After Sam's second loss, Fortuna ended up helping the Winchesters anyway as she still cared about true heroes, whom she would often help in antiquity. Having believed that true heroes no longer existed, Fortuna recognized the Winchesters as such when Sam selflessly rejected her offer to give him greater luck and instead chose to try to free those whose luck she was taking. Though she won, Fortuna restored the Winchesters' lost luck, shut down her pool hall, and even gave Sam and Dean advice on how to face God. However, she did not go overboard and give them an extra increase in luck as noted by Dean. Sam suggested that it was because Fortuna saw them as true heroes and maybe true heroes didn't get all the shortcuts after all.

Fortuna took the appearance of a middle-aged red-haired woman.

As a deity, Fortuna exhibited standard abilities for her kind. Interestingly, despite what seemed to be a limited skillset, her control over luck was such that she could counteract a curse on the Winchesters from God himself.